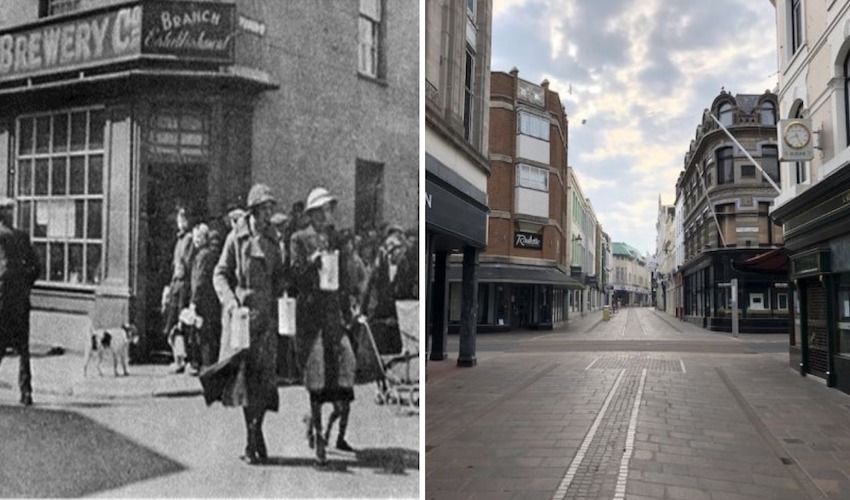 Politicians, commentators and islanders alike have drawn comparisons between the current virus crisis and the Occupation – but are these two eras really so similar?

As the island approaches the landmark Liberation anniversary, which will this year be celebrated very differently, Occupation Historian Colin Isherwood takes a closer look at what separates the island's two lockdowns - aside from 75 years...

“With the 75th anniversary of Liberation fast approaching and although the celebrations are now on hold, one cannot help to stop and look and wonder what comparisons can be made of life then and life under the current lockdown.

When the lockdown was officially announced on Sunday 29 March 2020 at 20:00, it was without doubt an unprecedented moment in Jersey’s history and an unnerving broadcast, feeling comparable to Neville Chamberlain’s speech in which he declared Britain was now at War with Germany, whereas on this last occasion, the residents of Jersey were faced with the daunting prospect of a National Emergency, we were at war with an invisible enemy. 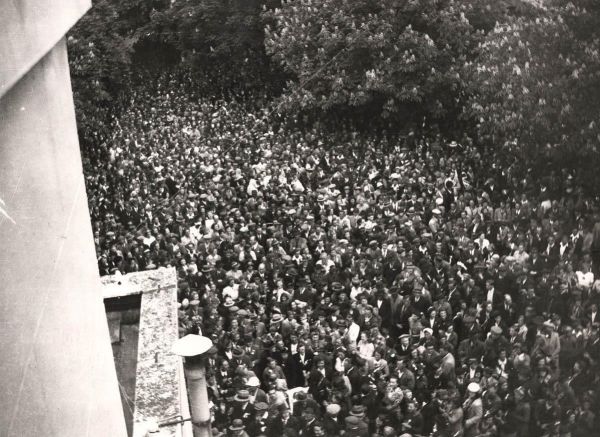 Pictured: Jersey will this week celebrate 75 years since its Liberation from Occupation.

Unlike the phony war, September 1939 to April 1940, this current event took the UK by surprise, it all happened very suddenly.

During the Second World War, it was the young men and woman who joined up and were at risk, today it is the elderly, many of whom fought during the war, or those with underlying health conditions who are sadly at risk, and this time it has also taken over the world, with no countries being able to stay neutral.

Just prior to the current island lockdown, there were shortages of a few basic goods: pasta, bottled water, hand sanitiser and toilet rolls! Several stores enforced restrictions (rationing) on some of these goods - although the circumstances are not comparable, the motive is the same, to prevent bulk buying and to allow everyone a fair chance of purchasing essential commodities.

Wartime rationing started in Jersey in September 1939, at which time there was still a steady supply of food and supplies coming into the island, this soon changed once the islands were occupied in July 1940. Some foods came in from France, but the situation gradually deteriorated year-on-year.

Although sadly many of the non-essential shops have recently closed, some businesses have digressed and adapted to the situation with home deliveries or by making protective masks.

We are fortunate to have a steady supply of food and essential goods coming into the island. In fact, we are being advised to exercise and to try and avoid putting weight on!

There was no chance of that during the Occupation.

Just prior to the arrival of the Red Cross parcels in December 1944, the average adult in Jersey was only consuming 1,100 calories and part of those calories came from substitute foods, which were essential for survival.

Food then was so scarce, householders were given tips and ideas as to what to make. For example, parsnips could make coffee and carrots made tea.

Although food today is not in short supply, we are receiving hints and tips from some celebrity chefs, telling us what we can make with five ingredients as most of us have dropped convenience foods and are now cooking from scratch with many growing their own vegetables, so in some respects we have gone back to the 1940s. 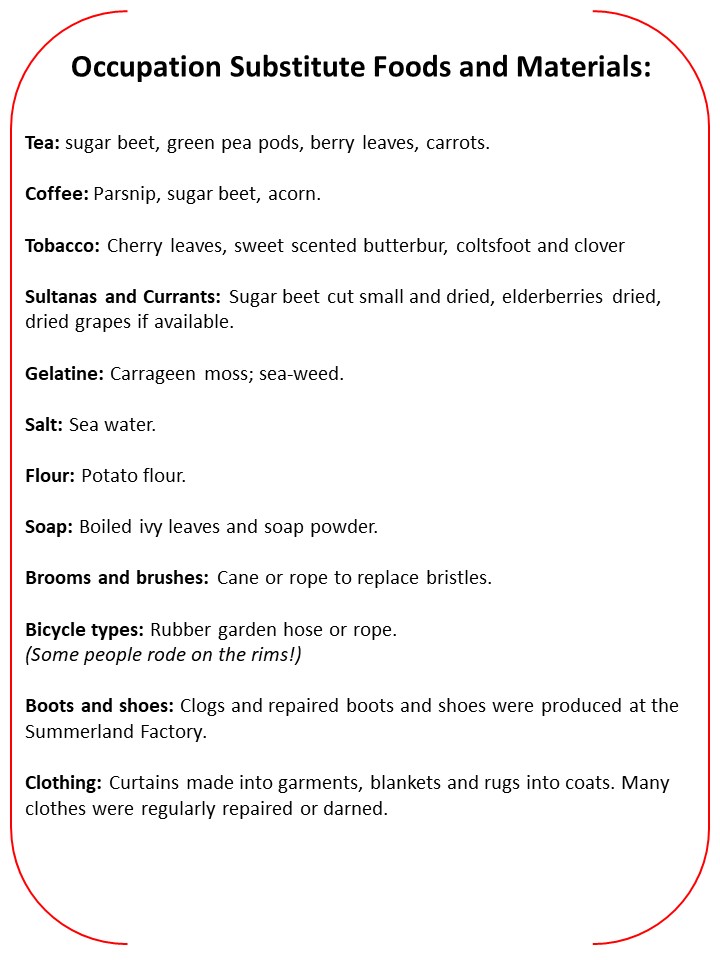 Pictured: With rationing and short supplies, islanders had to improvise (Colin Isherwood).

Shopping in this current environment can be difficult and due to social distancing we now have to queue, but it is still not as bad as the Occupation where people could queue in-line for hours for a loaf of bread or some milk.

For many of us, the idea of online shopping is more appealing, having your goods delivered to our doors is a great convenience unheard of 75 years ago.

The current lockdown means our movements are restricted and if we do have to venture out, it should not be longer than two hours for exercise or essential shopping, so is that worse than the Occupation? Being locked down does make it difficult, if not impossible, to meet people and so puts a pause on any romantic interludes - something that did occur during the Occupation!

Back then, islanders were able to venture out, providing they did so within the set times of curfew, and they had to carry their identification card at all times. Being out after curfew or not having identification with you carried heavy fines and repeat offenders could be jailed.

Military areas and zones were strictly out of bounds for civilians as most of the cliff paths had been mined or inaccessible and many of the beaches were closed to the public, those that were accessible would only be open at certain dates and times.

Only essentially employed, such as a doctor, were allowed a car. However, by late 1944, much of the island’s petrol supplies had been exhausted, so walking or cycling became the norm.

One similarity between both periods is that the gathering of groups of people were not allowed. Then, it was to minimise any chance of resistance, whereas now it is for our public safety and welfare. 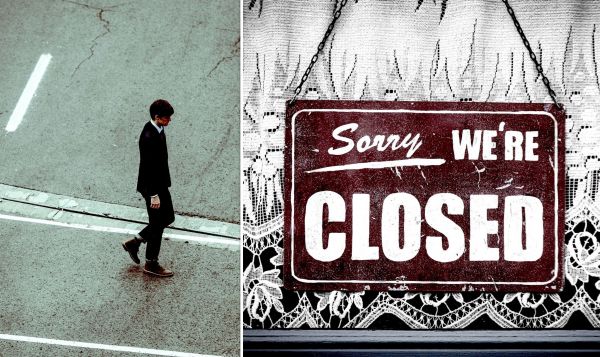 Pictured: Whilst similar restrictions have been placed on islanders then and now, Colin says that they were imposed for very different reasons.

We all take modern technology for granted, especially radio and television, but it was all very different during the Occupation.

On the 8 June 1942, the German Authorities issued an order stating that all radio sets belonging to the civilian population had to be handed in and anyone retaining one or found listening to a homemade crystal set, risked serious penalties. Entertainment from then to 9 May 1945 consisted of listening to a gramophone or someone playing the piano. People amused themselves playing cards, sewing or reading books.

Today, it’s easy to download a book onto a mobile device, but due to the shortage of books then, some people read the same book two or three times during the course of the Occupation!

An upside of modern technology is being able to keep in contact with family and friends, whilst observing social distancing. We are able to phone or message regularly to avoid worry - something that was not possible in wartime.

There were no phones, the Red Cross letters were the main form of communication then, but it could take weeks for a reply to get through.

On Christmas Eve 1944, the island's schools closed for the Christmas holidays. However, due to the severe fuel shortages and a very cold winter, they did not re-open for another seven weeks. As this was not a planned break, there was no homework or studies for the children to undertake. This current school break may well surpass that extended break, but, as it was planned, there are at least online studies which the children can benefit and learn from.

There are many similarities between the two time periods. We are undoubtedly in an unprecedented time and these current events will be etched into Jersey history for all time. The hardships we are enduring now are depressing, but what was endured during five years of Occupation should never be underestimated.

It is sad we will be unable to celebrate the 75th anniversary of Liberation this year. There were lots of events planned, but the health and wellbeing of islanders is far more important.

When we do eventually hold a belated Liberation celebration, I am sure for many of us it will be even more poignant, but, until then, we can adhere to that famous wartime motto: ‘Keep Calm and Carry on!’”