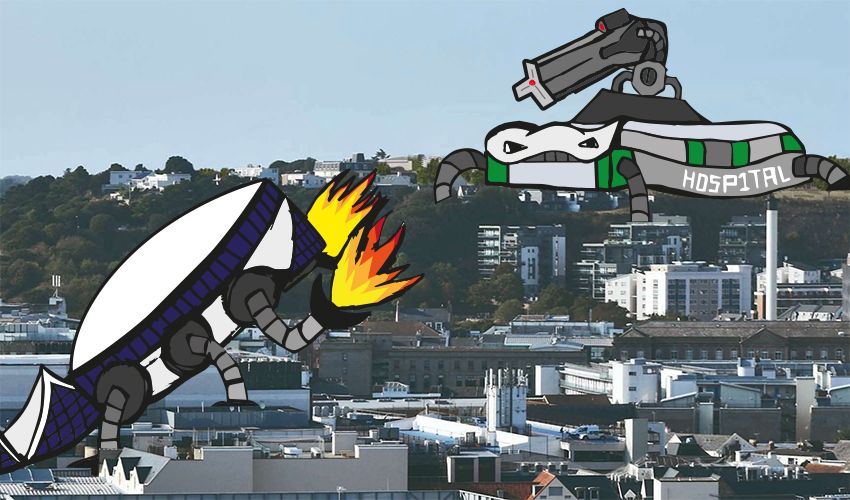 Filming will start soon on the latest Hollywood blockbuster about clashing monsters and who will control the St. Helier skyline.

Fortzilla v King Overdale will pitch two white-roofed beasts against each other.

For years, Fort-zilla has laid in splendid isolation on Mont de la Ville, guarding its territory, with its dome and wavy roof protecting it from attack by Casinos, Hotels and Gardens.

But now a new chimera has arrived, with its own giant wavy, white-roofed armour. It is taking up position across town at Westmount, and threatening Fortzilla’s position as the premier skyline-busting structure in St Helier.

Fortzilla does not take kindly to this cross-town imposter and launches an attack on the giant rectangular King Overdale.

As these two beasts punch the living daylights out of each other, trees are destroyed (although they will be replaced), roads are flattened (much to the delight of hospital planners), and everyone protected by the Fort’s giant roof has to leave immediately (much to the joy of the Government).

Fortzilla's powers are its gym-built strength, thick skin and multiple canons, although it has just lost its sibling Pool-zuki.

King Overdale’s powers, in contrast, are unproven but it can draw on support from Knowledge Centre-san, Giant Car Park and Super Highway Man. It is possible it will fire laser bolts out of its atrium.

Producers remain tight-lipped on who will prevail in this epic battle to be the dominant carbuncle over Jersey’s capital.

Fans and reviewers are desperate to see more information about the film - perhaps a trailer or some 3D images - but those behind the blockbuster say that none are yet available.

The intention is for a trailer to be submitted by November 2021, although Express understands the project may already be behind schedule.

Pictured top: A rare still from the forthcoming monster-battle movie.

NEWS EYE: Flood of CEO applications after news of £500,000 payout