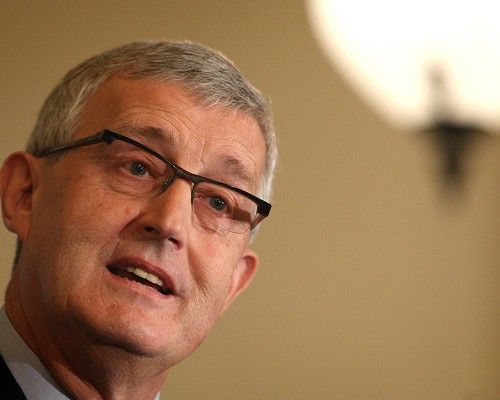 A damning report into the near-collapse of the Co-operative Bank has laid the blame on executives running the business in the wake of its ill-fated merger with the Britannia building society.

Sir Christopher Kelly, author of the review, said: "This report tells a sorry story of failings in management and governance on many levels."

The former Treasury mandarin was asked to investigate after the bank was found to have a £1.5 billion hole in its balance sheet which ultimately required a rescue by bondholders. His long-awaited report found "overwhelming" evidence that Britannia chief executive Neville Richardson, who took over as boss following the 2009 merger, failed to leave the new business "in a good position" when he departed in 2011. It also said the culture of the bank was partly to blame, with a "willingness to accept poor performance" and a "tendency not to welcome challenge".

The board of the wider Co-operative Group, led at the time by Peter Marks, also came in for criticism for failing properly to oversee the bank and badly letting down the group's millions of members.

Sir Christopher said: "The roots of the shortfall lie in a merger between the bank and the Britannia building society which should probably never have happened. Both organisations had problems. Bringing them together exacerbated those problems. It might have worked if the merged organisation had first class leadership. Sadly it did not."

In response to the report, current Co-op Bank chief executive Niall Booker apologised for "past failings" and said it had been "working diligently" to address them. The bank also revealed it was appointing new auditors, Ernst & Young, ending a 40-year relationship with KPMG amid a regulatory investigation into the Co-op's past accounts in the years leading up to the end of 2012.

As well as the merger with the Britannia, at the time the UK's second largest building society, the report focused on a disastrous attempt to update the banking group's IT systems. An abortive attempt to buy more than 600 branches from Lloyds Banking Group, dubbed Project Verde, was also examined, along with attempts to bring the business closer to the wider Co-op Group in a process called Project Unity.

Sir Christopher scrutinised the bank's management of its loan book, approach to risk management and capital, as well as its involvement in the payment protection insurance mis-selling scandal that caught up much of the wider sector. The report was based on more than 130 interviews with current and former employees, board members and others, and examination of internal papers and external reports.

Sir Christopher said: "The Co-operative Bank executive management failed in its oversight of the executive. The group board failed in its duty as a shareholder to provide effective stewardship of an important member asset. Collectively they badly let down the group's members. The lessons we set out are far from novel. It does no credit to those involved that they must be learnt again. I hope my report will help the group and the bank in their efforts to rebuild organisations of which their members and customers can once again be proud."

Sir Christopher revealed that the only member or former member of the Co-op group or bank leadership who declined to meet him was disgraced former bank chairman Paul Flowers, whose lack of experience for the job has been widely criticised.

The wider Co-op group welcomed the report, saying it demonstrated the need for change in its own governance, which has faced with stiff resistance from some within the organisation.

Interim chief executive Richard Pennycook said of the report: "It is a sobering assessment which shows clearly that the Co-operative Group's loss of control of its nank could have been avoided. The management that instigated this disaster for the group are no longer in place. The flawed governance structure that failed to apply the right checks and balances, however, remains. Our colleagues, our members and our customers now look to the group and regional boards to deliver the reforms which are so clearly necessary."