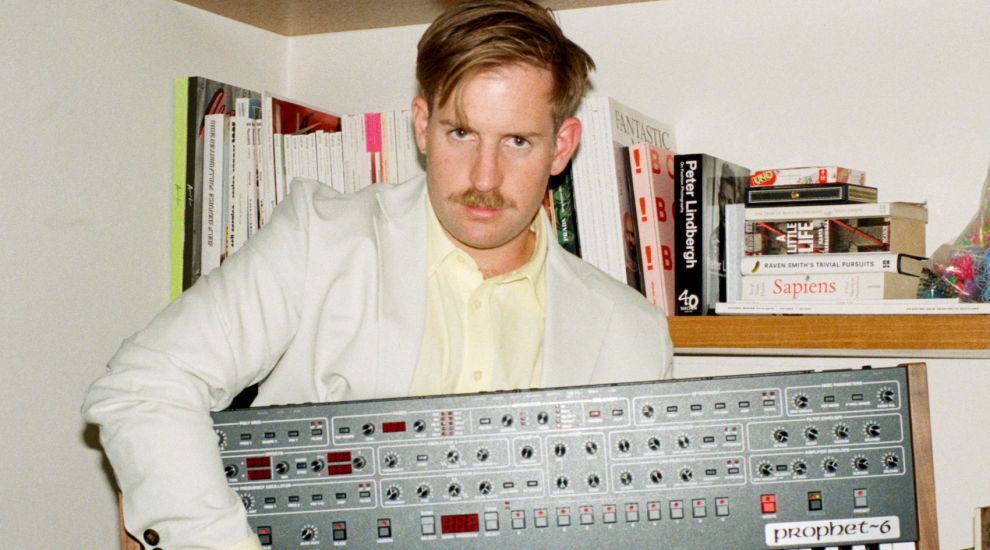 A Jersey-born musician has released a song inspired by his experience as a gay teenager growing up in Jersey complete with a colourful music video shot in Grouville.

Rhumba Club, a band by Jersey-born musician Tom Falle, has released its “biggest single yet": ‘The Rhumba Club is Waiting For Me’.

The song comes with a colourful music video shot on the grounds of a mid-century house, very close to La Hougue Bie under the direction of Valters Gatis.

The video features colourful outfits and Tom’s smoothest moves, in and out the pool, acting as the perfect backdrop for the ironic and emotive song, providing a well-needed dose of pop escapism.

“In TRClWFM, I wanted to custom-build a place of queer escape,” Tom said. “Inspired by the feelings of insecurity I felt as a gay teenager living on a small island Jersey, I wanted the track to reflect that private sense of empowerment I experienced with my headphones in, listening to Erasure and The Communards.”

The track has already attracted the attention of Clash Magazine which named it 'Track of the Day' on the day of its release, describing it as “a slinky piece of synth pop, with an arch, ironic air, with Tom Falle’s assertive vocals recalling those 80s greats.”

New music for @fendi @fisforfendi written by me ⁣ So good to work with the insane and amazing @ivan.ruberto ⁣ @camilotoston @vivlevav⁣ ⁣ ⁣

It's been a big year for Tom.

Not only was he featured in GQ magazine’s list of new artists to watch in 2020, with ‘Pocket Machine’ hailed as the "perfect lockdown banger", he also composed music for Fendi’s Flow-up collection.

And there's more to look forward to. On 3 November, he'll be headlining a physically distanced show at The Phoenix Arts Club.

A touch of nature on Seale Street

He described his mural as “an imaginative sort of fantasy”, adding: “The idea was to show the kind of wood they use to make things from, but not to show images of tables and chairs."

“So, there’s the idea of a forest, a bit of nature and other elements, there’s also old Jersey elements, the lighthouse, a hot air balloon and an old Jersey plane, as well as some of the local flora and fauna.”

While the mural is not entirely finished yet – the recent inclement weather has hindered progress – Ben says the response so far has been amazing.

“It’s quite different to my normal work, it’s not as contemporary,” he said. “The response has been amazing, people may want to see something positive or maybe it’s because it bring some nature to town!”

Last week, Ben took a break from the mural to work with James Carter of Midnight Industries and Highlands students to illustrate their views of what the future of Jersey should look like on a bus donated by Liberty Bus. 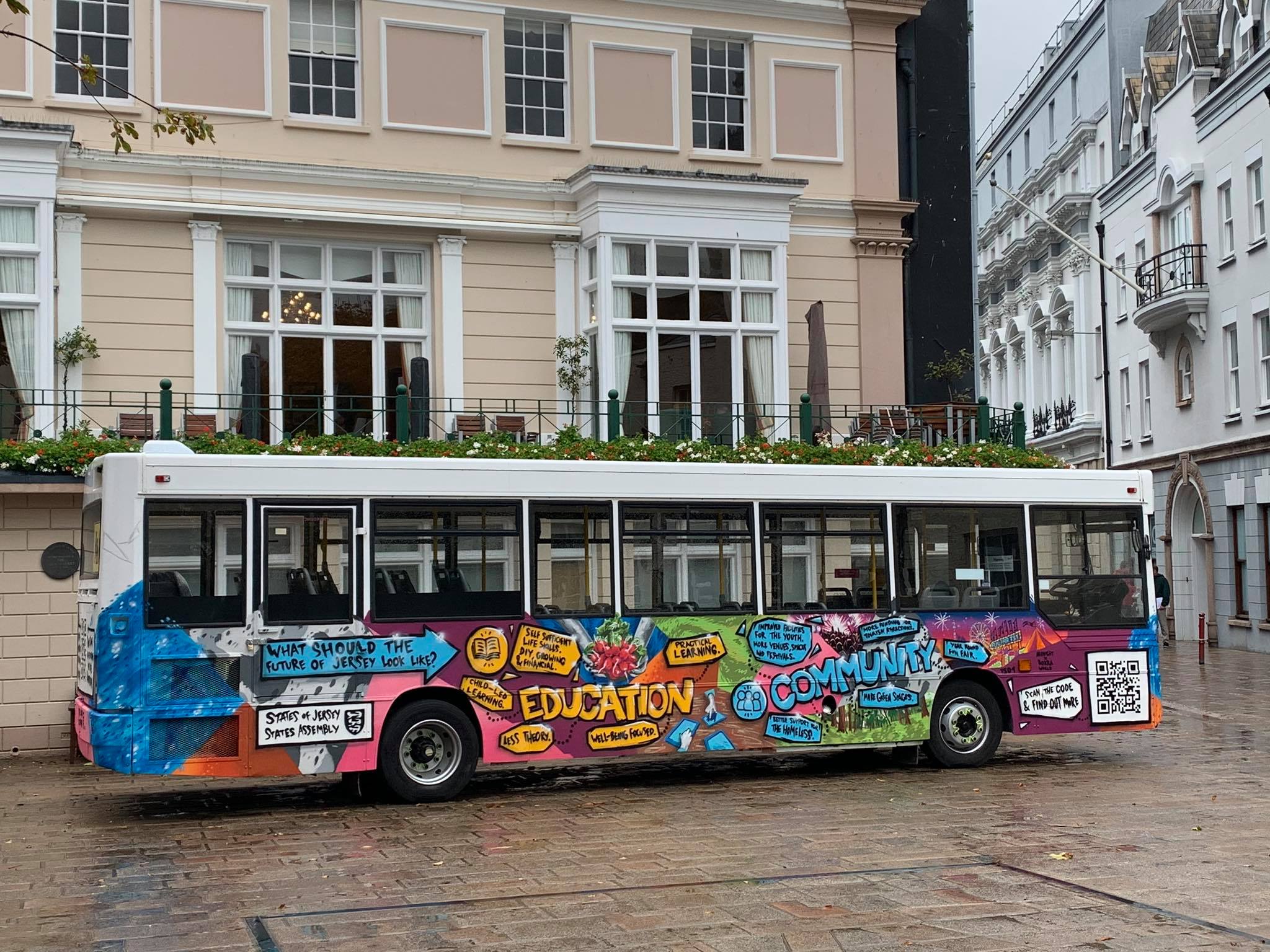 Pictured: The graffitied bus can be seen on Royal Square.

The project was part of Jersey’s first ever Democracy Week, which aimed to give islanders the opportunity to learn about and engage with local politics.

“It was quite a refreshing and interesting day with the students,” Ben said. “Some of their ideas were amazing, it restored my faith in the youth. It was fitting that they mentioned green spaces because it was one of my ideas as every little green space seems to be built on!”

After featuring a local grandmother ‘sweet story’ in the Liberation 75 logo, the Bailiff’s Chambers are inviting islanders young and old to get creative and design a new logo that will be used for upcoming Liberation Days between 2021 and 2024.

The judging panel will look for “a clear and simple logo” that identifies Liberation Day and reflects the five “values” of the day: community, celebration, commemoration, commitment and creativity.

The logo will have to be appropriate for a public setting and easy to use, resize and manipulate for all reproduction purposes – from social media and the website, through to merchandise such as pens, badges and t-shirts.

It is hoped the logo will have a Liberation story behind it, like the Liberation 75 logo. Designed by Emma Le Gallais, it was inspired by the first-hand account of her grandmother, 79-year-old Enid de Gruchy. Aged just four on Liberation Day, Enid remembers going into St. Helier with her family and receiving her first ever sweet from a British soldier.

The competition is open to all islanders of any age whether living here or abroad until Wednesday 21 October. The winner will be announced via social media and other media on 11 November.

One last song for the road...

‘What Kind of Life?’ Is a melancholy ballad about feeling lost and confused, penned by musician Rebecca Lewis as she adjusted to drastic changes in her life over lockdown.

Finding herself yet again in her childhood bedroom making music, Rebecca wrote and produced the song which comes as a follow up to her debut single ‘Your Favourite Guy’ released in June.

Once again, Rebecca partnered with her childhood friend, Director Lucy Abraham for the video, and the pair received funding from ArtHouse Jersey. For ‘What Kind of Life?’, both said they were inspired by the dreamy quality of TV series ‘Euphoria’.

The pair say they want their project to inspire young women on the island to keep chasing their ambitions in the arts.