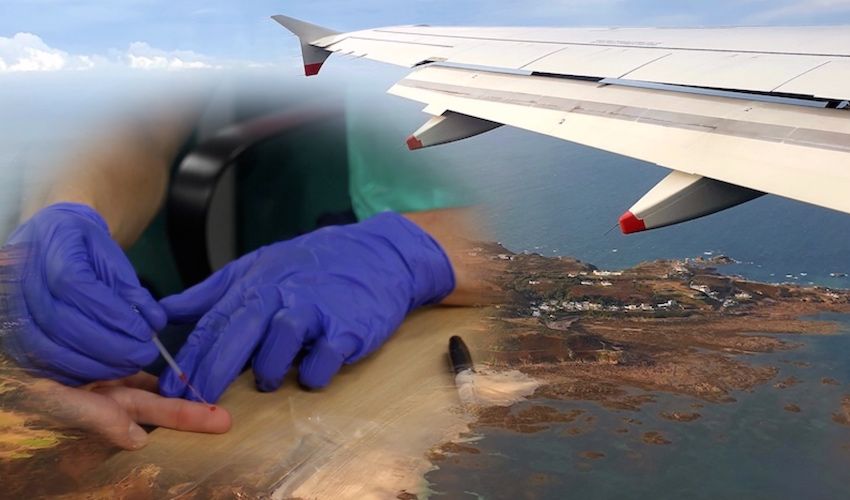 Jersey’s borders WILL reopen this Friday after States Members voted in favour following a debate lasting more than 10 hours.

There were no abstentions.

Under the new 'Safer Travel' policy, islanders will no longer need government permission to travel and will have to take a PCR (diagnostic swab) test for covid-19 upon arrival in Jersey.

If the test returns a negative result, they will be allowed to move freely around the island.

However, there is no plan to enforce self-isolation while they await the result of their test, though Ministers previously expressed hopes that islanders will use "common sense".

Anyone who chooses not to have a test will have to self-isolate for 14 days.

A dedicated testing facility is already in place at the airport, and one is currently under construction at the harbour.

Work coming along on Ports arrivals for swab testing at Elizabeth Terminal and will be completed for Friday. Thanks everyone for their hard work ⁦@ChiefNurseJsy⁩ ⁦@sharkymich⁩ pic.twitter.com/WlA6bmpsg7

The decision to reopen the island to commercial travel from this Friday (3 July) comes despite a push from the Scrutiny Liaison Committee led by Senator Kristina Moore earlier today to delay the reopening by one week.

Numerous States Members spoke in favour of the idea, including Ministers who broke ranks.

Environment Minister Deputy John Young said the government should have a more robust testing, track and trace programme in place before reopening.

Children's Minister Senator Sam Mézec said economic concerns had bled into health concerns, arguing that it wasn’t right to allow visitors to go out in the island before they have received a negative test result.

He also suggested that instead of allowing travel with the UK, “one of the worst affected countries”, Jersey should look at air bridges with Guernsey, the Isle of Man or Madeira.

However, the plan to delay the reopening was thrown out.

The group of senior Scrutineers did, however, succeed in getting the government to agree to create a list of ‘safe countries’ for travel based on their R number and testing regime.

The overall debate lasted more than 10 hours, with one speech by Deputy Montfort Tadier lasting in excess of 50 minutes.

Her comments led to a reprimand from the Deputy Bailiff, who told her that it was "quite inappropriate" to interrupt.

Minutes later, another individual could be heard in the background, saying: "I'm starving, I want my tea!"

Eventually, States Members voted in favour of a guillotine motion, forcing the closure of the debate, and leaving Senator Ian Gorst to sum up his argument in favour of opening the borders before the final vote.

Speaking following last night's debate, Chief Minister Senator John Le Fondré said: “We brought our proposition to the Assembly with the health and wellbeing of Islanders at the forefront of our minds. Today’s debate has been an emotional one, and I understand the genuine concern among some Islanders. I want to reassure them that we have a robust system in place, which will test all arriving passengers who have opted not to self-isolate.

“We are in a very good place now, with no known active cases, and we want to protect that situation as far as possible. But we must also enable our valued hospitality businesses to get back to work, employ people and provide the services that can be enjoyed by both Islanders and visitors.”

For a round-up of the good, the bad and the ugly of the debate, click HERE.

Posted by Jon Jon on Jul 2nd, 2020
All I say is ,if numbers increase up in this island due to tourists coming,then resignations from Le Fondre,Farnham etc will need to happen,either way hopefully they’re out in the next elections.So a visitor comes to the island,is tested ,then can move around freely till result comes back,maybe positive,therefore infecting people around,that’s crazy,this government should take note in the uk it’s not dropping with cases,if hotels can now accept guest then no more financial help for them as well as any other tourist attraction.
Posted by Scott Mills on Jul 2nd, 2020
can't our policiticians speak english pour and contre. It's 21st century. Pathetic. trace and track...has anyone noticed this app...has suddendly appeared on their smart phones (handheld laptops) automatically. I believe they installed it when all networks went down for a while the other week. Allowed them to reset the system, during bad weather....very ironic.
Posted by Austin Marsh on Jul 2nd, 2020
Round 2 of lock down and more people getting sick it’s going to happen it’s inevitable
Posted by Austin Marsh on Jul 2nd, 2020
Round 2 of lock down and more people getting sick it’s going to happen it’s inevitable
Posted by Simon Berry on Jul 2nd, 2020
Its like Russian roulette, it isn't a question of IF they let a carrier walk around infecting people, its WHEN. If the test is the same one Guernsey uses, they have up to a 20% chance of a false 'negative' result. Oh dear.
Posted by John Henwood on Jul 2nd, 2020
I don't listen to as many States meetings as I used to, and listening to this one, I remembered why. Seldom have I heard such an unedifying debate. One after another members repeated what had already been said and several repeated themselves. One after another the amendments were comprehensively defeated, but when the last one had been dispatched and the intentions of the Assembly were abundantly clear, still those who opposed the main 'Safer Travel' Proposition continued the debate. There were attempts at procedural dodges and extra long speeches until it appeared that the opposition was just trying to wear everyone else down. The people of Jersey derive better than this.
Posted by Jasper Klidenengro on Jul 2nd, 2020
The last six cases of covid were without symptoms and had only been identified by testing. Only a small percentage of islanders have actually been tested. Statistically speaking, that probably means that there are still many islanders without symptoms, but still carrying the disease around. They are not a danger to themselves, but they could kill any vulnerable islanders to whom they pass on the disease. Is it not lunacy, bordering on the criminal, to pretend that Jersey is covid-free? Why do the States not want the people of Jersey to be safe? Why have the States not tested everyone on the island before lulling us into this (false) sense of security? In the end, we have only ourselves to blame, we elected them!
Posted by Keith Marsh on Jul 2nd, 2020
It was going to happen after the First Minister did his press conference WELL BEFORE he asked The States to debate the issue. WRONG WAY AROUND. ... Its true Jersey does have to open up, but as usual it has not used its brain first. (1) There should have been a "Blacklist" of countries, from where its people would NOT be let in.... yes, they would be returned (2) There should have been a hotel, where ALL visitors would be housed prior to getting a negative test result. (3) There should have been a system of re-test after day4 and day7 and if any test proved positive, they would be told (not asked) to self isolate. But as usual, its the Jersey way .... Money first ..... people second.
To place a comment please login Login »