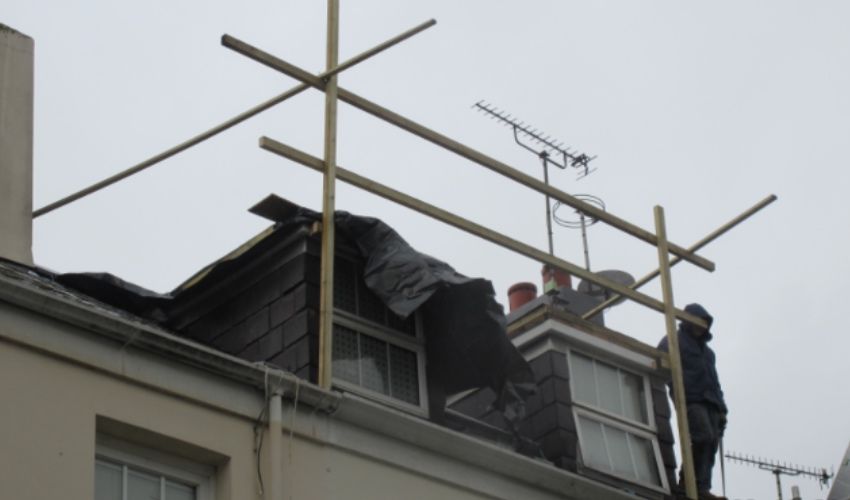 A builder has been fined £40,000 after building a dangerous scaffold tower and putting his staff at a substantial risk of harm.

Timothy Bidmead was sentenced by the Royal Court on Friday for what were described as two "serious" breaches of regulations, committed last November when work on a three-storey property in Duhamel Place prompted a concerned member of the public to ring the Health and Safety Inspectorate, who visited the site.

The inspector immediately assessed that a scaffold tower built to access the roof was unsafe and edge protection constructed on the roof was “entirely inappropriate”, in that it did not provide any protection to stop someone falling to the ground.

He witnessed a workman climbing a ladder on the outside of the scaffold tower that ran from top to bottom. This could have caused the tower to topple over, he judged.

Although there were platforms within the tower, they had no handrails and were on the opposite side to the external ladder, which increased the risk of falling. 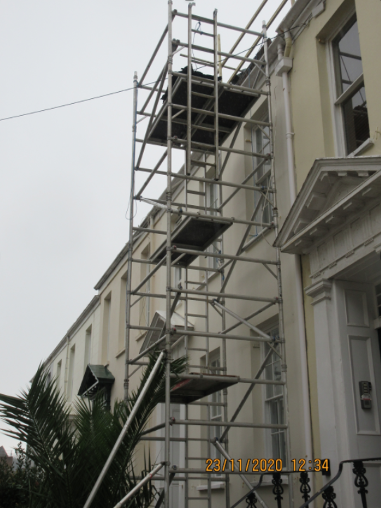 Pictured: A photo of the tower taken by a health and safety inspector, which had a continuous ladder running up it on the far side.

The tower only covered 2.4m of the 6m width of the building, meaning that a section of the roof had no protection. Workers therefore had to move from the tower to the area of work, around two dormer windows, without any measure to stop a fall.

The inspector also deemed the guardrail around the dormers to be inadequate and not sturdy enough to prevent a fall.

The inspector immediately served prohibition notices on the company, which was owned and managed by Mr Bidmead (60) at the time, to stop it from using the scaffold tower and from working on the roof of the building.

The Court heard that Mr Bidmead had admitted that he had built the tower with an employee. 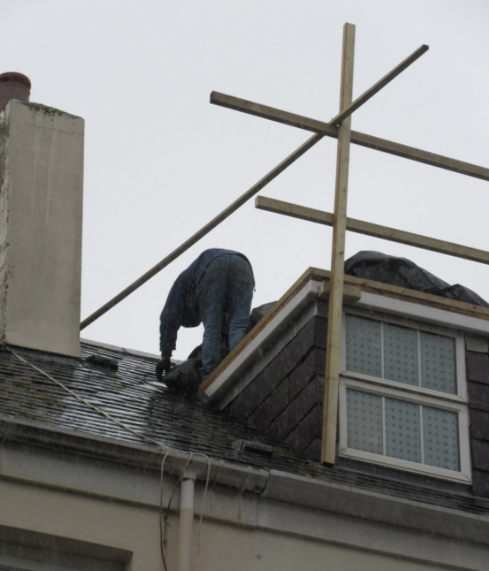 Pictured: The wooden guardrail was deemed inadequate and would not have prevented someone falling underneath it or to either side.

Interviewed by the Health and Safety Inspectorate afterwards, one of his three employees, who had erected the edge protection, said: “I did say to my boss that it wasn’t very safe, but he said to go and have a look and try to fix the slates.”

The workmen said that they had not seen any risk assessment.

Crown Advocate Lauren Hallam told the court that Mr Bidmead had been served with seven health and safety notices in the past, including three in relation to working at height.

The last had been in January 2020, when a workman was seen standing on a dormer window of a pitched roof without any guardrail.

Mr Bidmead was also fined £500 in the Magistrate’s Court in 2017 in for a workplace accident while he was working for another firm. 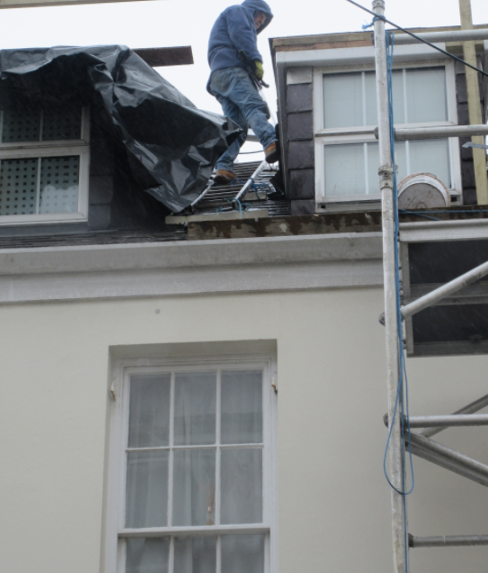 Pictured: There was no barrier for workers between the dormer windows.

Advocate Hallam called for the Court to impose a £80,000 fine.

Defending, Advocate Estelle Burns said that Mr Bidmead fully accepted the seriousness of the case and was “genuinely remorseful”.

She added that her client had not set out to construct an unsafe tower but had not properly followed its instructions. He also accepted that he should have inspected the guardrail constructed by his employees, which he had failed to do.

She also set out Mr Bidmead’s financial position, arguing that he had run a small company and only enjoyed “modest profits”.

The lawyer added that Mr Bidmead had sold the business to one of his employees in February – although the decision had predated the incident last November. He had since been reemployed by his former firm on an hourly rate, as he prepared to retire due to age and ill health after a 40-year career in the building trade.

Taking his personal circumstances into account, Deputy Bailiff Robert MacRae, who was sitting with Jurats Steven Austin-Vautier and Paul Nicolle, halved the Crown’s recommended fine and ordered Mr Bidmead to pay another £5,000 towards prosecution costs.

More than half of safety notices this year given to construction

INSIGHT: Unpacking the plan to build a hospital at pace