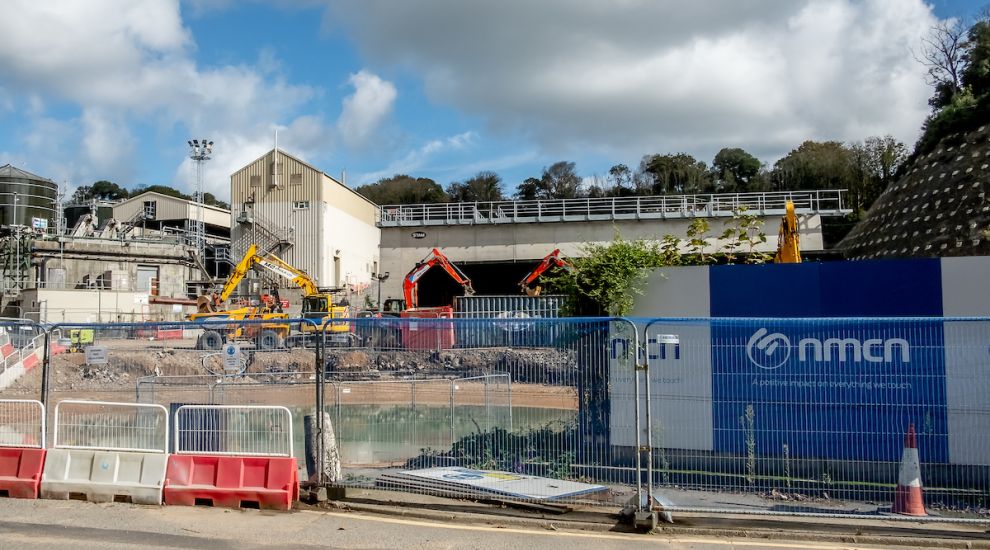 The Chief Minister had few answers this morning as he was grilled over the failure of the £75m Bellozanne project’s main contractor, and whether Jersey was one of its “problem contracts."

UK firm NMCN was put in charge of the sewage treatment works upgrade in 2018 after problems emerged with the first firm, Doosan Enpure, which was originally given the contract back in 2014.

The contractor, which was the Government’s highest paid contractor in 2020, fell into administration on Monday, putting more than £200,000 of local subcontractors’ money at risk.

Despite a pledge from the Infrastructure Minister yesterday that the Government was continuing with the project, Express understands that work has at least temporarily ceased, and contractors left the site earlier this week.

News of NMCN going bust comes just months after the firm was given a £1.5m boost by Government to stop the project slipping any further after the completion date was delayed from 2022 to October 2023.

The collapse also followed months of loss warnings and other red flags about the company’s health.

One of which, as early as autumn 2020, saw the board admit that NMCN was suffering from problem contracts, mainly in its water division.

Yesterday, industry news outlet the Construction Index reported that it was “understood that the problem contracts are a new £100m water treatment plant at Frankley (in joint venture with Doosan Enpure) for Severn Trent Water and the new £60m Bellozanne sewage treatment works in Jersey.”

“They were quite ambitious undertakings for a company the size of NMCN,” the report added.

During urgent questions to the Chief Minister this morning initiated by Public Accounts Committee Chair Deputy Inna Gardiner, Deputy Kirsten Morel referenced this report as he questioned how satisfied Senator Le Fondré was that the appropriate due diligence was undertaken to ensure that NMCN would be capable of delivering the project in advance of its appointment as main contractor.

The Chief Minister was clear that he was “not involved in the process”, as it was before he was in Government, but said he expected the due diligence would have been “appropriate” before committing to come back with a fuller answer at a later stage.

St. Brelade Constable Mike Jackson also raised questions about the procurement, asking whether the Government had learned from previous “mistakes” given a previous UK contractor dealing with the sludge platform phase had also gone into administration.

Senator Le Fondré replied by saying there were “measures” in place, but did not detail these.

He also said he was sure a review of due diligence in relation could be arranged if desired.

When Deputy Steve Luce asked whether there were any provisions that would enable the States Assembly to have influence in the administration process, the Chief Minister said he would have to “revert back” on this.

His responses were similar when he was asked about whether there were any financial guarantees in the NMCN contract to protect local companies involved in the Bellozanne project, and whether the Government’s had failed to arrange “plan B” protocols in case the company goes bankrupt.

To the latter question, he said that he was unable to comment, emphasising that he has no “direct responsibility for the project”. However, he added that he would “very happily go and find out.”

Yesterday, the Infrastructure Minister had said the Government was "assessing our contractual and legal position whilst the formal administration process becomes clearer."

Responding to questions about the project’s immediate future this morning, the Chief Minister maintained that the Government was “very very keen” to see the project through, and said that he understood it was a “longstanding” and “important” project given that he was Assistant Minister in the then-TTS Department at the time of the sewage treatment works project’s inception.

Senator Le Fondré was unable to say whether the Government of Jersey itself could take responsibility for the project, working alongside local contractors, adding that he was “not sighted” on the “deep level technicalities” of the project.

FOCUS: How did NMCN come to be involved with Bellozanne?

It was around a decade ago that the Government realised the need to upgrade Jersey’s sewage treatment works at Bellozanne.

First constructed in 1959, the plant was no longer meeting modern standards by the 2010s, and there were concerns that it may further struggle as the island’s population grew.

In 2014, States Members approved a waste water strategy laid down by the Council of Ministers, which included plans for the £75m upgrade of Bellozanne.

A tender process opened that year, and Doosan Enpure was handed a contract to come up with designs and identify the most efficient and effective way of getting the works underway while maintaining operations on site.

However, in 2016, the early contractor involvement phase concluded prematurely because the Government felt it was not an “optimum solution” offering “best value”.

The Government therefore engaged consultants Sweco to fulfil the role instead.

The final layout and process schedule was agreed, and the main project was tendered in July 2017, after an initial questionnaire was sent out in May 2017.

NMCN – then known as North Midland Construction – were given preferred contractor status in December 2017.

This ‘early award phase’ work involved exploring “synergies” between different phases of work as part of a plan to reduce the overall programme cost and “optimise” delivery.

The firm was given a design and build contract worth £56.3m in April 2018 – including £3m for odour control, resulting from pressure from neighbouring residents.

The contract sum did not include additional professional fees, contingency funding and other money set aside to deal with inflationary costs.