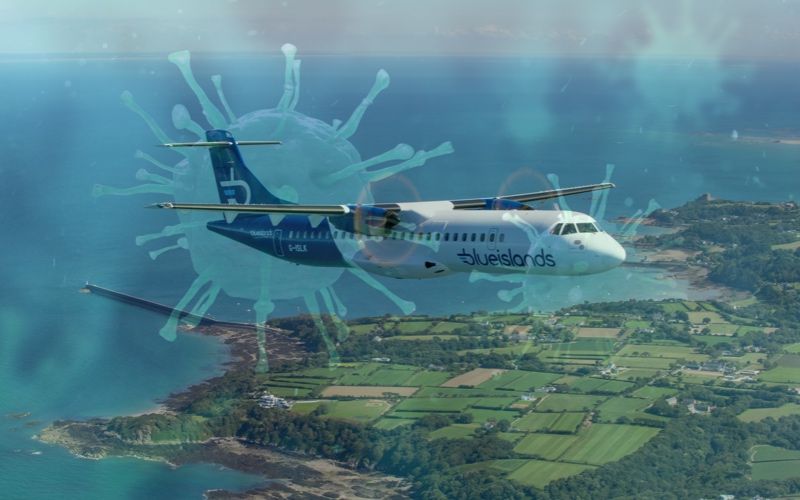 The Government has ring-fenced £241,500 to keep Blue Islands running if routes become unprofitable during the pandemic.

If the subsidy is needed, it will ensure the airline doesn’t lose money when providing lifeline flights for islanders, including those needing hospital treatment in Southampton.

If this happens, Blue Islands would still sell tickets, but the Government would make up the difference to ensure the airline breaks even.

At the moment the airline is operating commercially, without subsidy.

The extra funding further cements the airline's status as Jersey's de facto flag carrier, with Blue Islands having already been given £202,891 last year under a contract with the Government to fly essential workers and non-emergency medical patients on a non-commercial basis.

A £330,000 budget was first allocated from Government reserves last April and the original three-month contract was extended in June to run until the end of July. This cost the Government £135,674.

It was then put on hold and restarted again in November, when travel restrictions started to bite again and the Government looked to help students and other Islanders return for Christmas. This ran until Christmas Eve and cost the taxpayer £67,217.

The £202,891 was in addition to £10m that the Government loaned Blue Islands last July, which was followed by a rebrand, new website and new routes.

As part of that deal, Blue Islands moved its main base from Guernsey to Jersey. Treasury Minister Susie Pinel said at the time that the loan, which has a six-year term, might be repaid in the form of shares.

Now Deputy Pinel has approved further funding. The report accompanying her Ministerial Decision says: “Covid-19 funding of up to £241,500 is required in 2021 to enable, should it be required, the continuation of the Government’s Blue Islands essential connectivity flights in 2021.

“This consists of up to £201,500 for ongoing essential route connectivity, and a contingency of £40,000 for additional student repatriation flights between Jersey and the UK, as required.”

Unlike the £202,891, this latest tranche of money is coming out the £40m contingency fund that the Government set aside in the 2022-24 Government Plan to meet extra covid-related costs this year. Paid for by borrowing, the fund will also pay for the recently announced £9.5m Fixed Cost Support Scheme and the £12m extended Co-funded Payroll Scheme, which will run until April.

At the moment, Blue Islands is operating a six-day-a-week return service to Southampton.

Meanwhile, the Government has said that it will not follow the UK's plan to force UK residents who return from high-risk countries to quarantine for ten days in hotels. Jersey has relatively few international connections at this time of year, although there have been recent direct flights to and from Madeira.

Portugal, including Madeira, is one of 22 countries on the UK Government's 'red list' that fall under the new requirements.

Pictured: Jersey has no direct flights with Madeira scheduled until April.

However, External Relations Minister Ian Gorst said: "There are no direct flights planned between Jersey and Funchal until April.

"We continue to liaise with the UK as travel restrictions relate to Jersey as part of the Common Travel Area, and relevant information for those seeking to travel to and from the Island will be updated on the gov.je website.

"Currently all countries and regions aside from Guernsey, which is amber, are classified as red with arrivals therefore being subject to the highest level of screening."