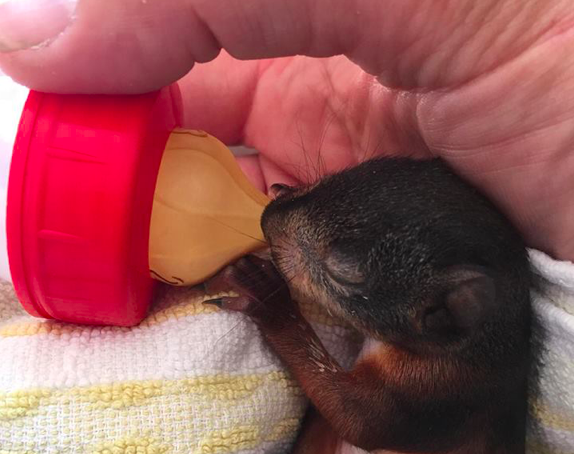 Every spring, the JSPCA rescues many kittens and squirrels and other tiny mammals who are so small they can't use normal feeding bottles.

The 'Miracle Nipple' is designed to be used with small mammals including kittens, puppies, squirrels, bunnies, and other animals of similar sizes. They come with a kneading pad for the newborn animals to knead with their small paws, as they would naturally do while nursing on their mother.

Barbara Heywood, a JSPCA staff member, explained that the nipples make a big difference, for kittens, mice, voles, ferrets and squirrels. "We have been using a neonatal specific formula in feeding bottles and it comes with nipples. As we are getting more and more young mammals it became obvious we need more equipment.

"It is very difficult to feed smaller animals. We have used catheters, because they have a thin tubing. We have used smaller syringes to deal with some animals but the Miracle Nipples are a much better equipment. Without something appropriate, the animals would not be able to feed. It is important we have the right equipment to give them the best chance of survival."

Pictured: The JSPCA team has used syringes and catheters to feed newborn animals in the past.

With the neo-natal season due to start in spring, the team at JSPCA is expecting to receive some tiny newborns soon. Easter is usually the busiest time of year. Ms Keywood said: "As soon as the weather is getting nice, baby animals start to arrive. The number of animals varies depending on what comes through the door. We usually have some kittens, who need hand-rearing. I once had to take five kittens in one go. It is round the clock care with regular feeding, until you are able to stretch out feedings for them to become more independent. We also have squirrels and baby rabbits who need a little bit of help."

Last year, the JSPCA team took care of an orphaned squirrel, named 'Baby.' Aged just three weeks when she was brought to the shelter, she was bottle fed with one of the 'Miracle Nipples.' Baby eventually made it back to the wild after spending a few days in a 'safe house' based at Grève de Lecq. Ms Keywood said: "When the squirrels are ready to be released, they stay in a safe house for a few days. There is a little house in a tree and a lady who looks after them leaves the door open. She leaves food in the house so that the squirrels can venture out and come back to eat or sleep if they want to."

Pictured: Baby was bottle-fed for a few weeks last summer.

The JSPCA is hoping to raise £200 which will help buy at least 60 'Miracle Nipples.' Islanders have already donated £130 on the crowdfunding page, which Ms Keywood has called "amazing": "We thank everybody for their support. This will help us be fully prepared for the season. We welcome every donations and if people wish to they can also buy sets on Amazon for us."