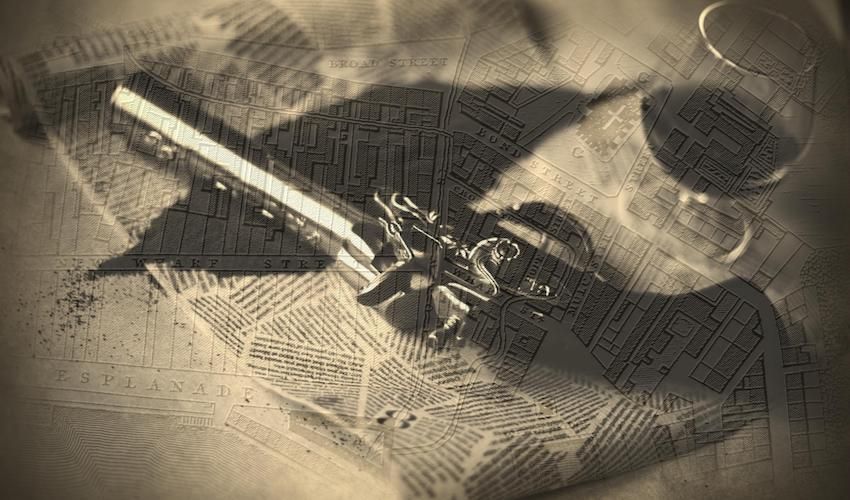 Did an elderly former soldier and father-of-21 commit a crime of passion on the streets of St. Helier on his return from London?

That was the burning question when Valentine Vigo Venner appeared in the Royal Court on Friday, 7 December 1883, accused of murdering Samuel Charles Wright a month earlier, in a court case that captivated islanders.

Valentine was in his 70s at the time he was accused and limped into the court on a pair of crutches. Despite strong evidence to the contrary, he pleaded 'not guilty' to voluntarily, criminally and deliberately firing at Wright on 6 November 1883, inflicting a serious wound that caused his death.

Pictured: Valentine Venner limped into the Royal Court on a pair of crutches.

Valentine indicated that he had acted in self-defence and appeared before the criminal assizes in March 1884. The evidence against him included a revolver being taken from him at the scene and cartridges and a match box found in his pocket. Mr Wright also lived long enough to make a witness statement before he died, implicating Valentine in the shooting.

The court case revealed that Valentine’s second wife, who was 31 years his junior, had lived at Wright’s eating house in Mulcaster Street for much of the previous year. Valentine had been heard accusing her of co-habiting with Wright prior to his trip to England.

Pictured: Valentine was suspicious that his wife had been living with the man he was later accused of shooting (Jersey Heritage/Jersey Archive).

Reports show that there was a masterful summing up of the case by Advocate Durell in which he pleaded to the jury that they “would not let an old man, ripe in years and covered with glory, perish on the scaffold. With their hands raised before God and man, they must acquit him of murder.”

Durell’s plea was heard and the jury’s returned a verdict of 'not guilty.' Reports show that this was a popular verdict: “The Lieutenant Bailiffs informed Venner of the verdict and his consequent release and a fresh outbreak of applause took place and was only suppressed with great difficulty.”

Valentine was born in Shooters Hill in Kent on Valentine’s Day. He enlisted with the Royal Artillery at Woolwich in 1832, aged 19, and went on to serve in the army for another 36 years before retiring in 1868.

During that time, he served in Ireland and then China for three years in the 1840s, and he is also believed to have fought in the Crimean War in the 1850s. He was later posted to Jersey and became a master gunner at Elizabeth Castle and Fort Regent.

In 1844, Valentine married Mary Steadman, of Limerick, in Woolwich. They had 11 children together before Mary died in Jersey in 1863. Valentine then married Elizabeth Tilly Harris the year after, with Census records showing that she lived next door to the Venner family and was ideally placed to take on Valentine’s 11 children.

Valentine was 51 at the time of their marriage and Elizabeth was only 20. They went on to have 10 children together and it was the second Mrs Venner who was one day to be at the centre of a court case which saw her elderly husband accused of murder.

Sisters doing it for themselves!