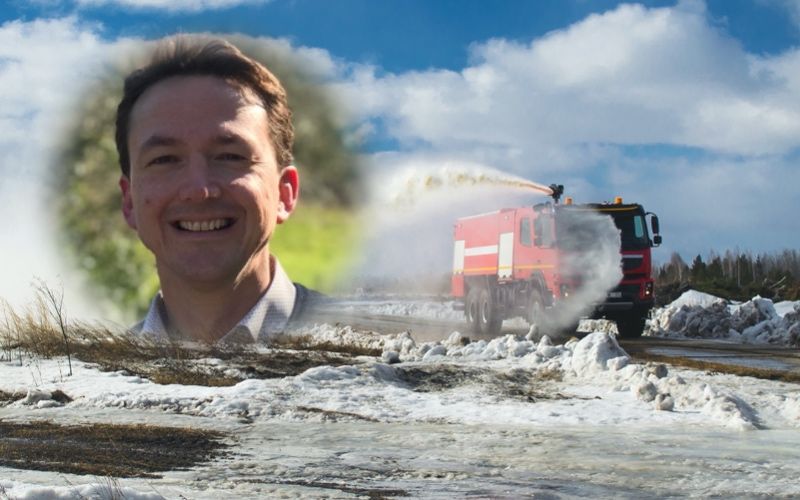 A newly appointed Assistant Minister is urging the Government to investigate claims that islanders have become seriously ill after drinking poisoned water.

Deputy Kirsten Morel, who recently left the back-benches to become an Assistant Economic Development Minister, says that the Health department needs to establish the truth about the impact of PFOS - a now-banned chemical that was an ingredient of firefighting foam sprayed at the Airport.

PFOS is one of a family of carbon-based manmade chemicals called PFAS, which were used extensively in the second half of the last century due to their resistance to heat, water, grease and oil.

Deputy Morel said he first took an interest in the issue as a member of the Environment Scrutiny Panel but he saw no reason why he couldn’t continue to seek answers as a front-bench politician.

The Deputy has officially asked a question of the Health Minister, which will be answered at the first States Assembly meeting next year.

Pictured: The 'plume area' of contamination in St Ouen's Bay. High levels of PFOS are stopping Jersey Water accessing important bore holes in the area, which the company say threatens the long-term water security of the Island.

He wants to know if any research has been done to see if anyone living in St. Ouen’s Bay, in an area of known PFOS contamination west of the Airport runway, has become ill because of the chemical.

Deputy Morel has also met with Sarah Simon, who has lived her whole life in the ‘plume area’ and is campaigning for an independent inquiry into the contamination. She also wants Health to test residents’ blood for levels of PFOS.

“I recently spent almost two hours with Sarah to hear her story and see the research she has done,” said Deputy Morel.

“It was interesting and informative and I was amazed at the amount of work, and her efforts to make her studies as scientifically based as possible.

“Some of her research, if true, is simply staggering. For example, 20 to 30 residents living in the plume area, some as young as seven, with kidney stones. It is a relatively sparsely populated area so if those figures are correct, there is clearly something wrong.

“Sarah has done a lot of research but it is important that it is verified, ideally by independent analysis, but firstly the Health department needs to investigate, starting with the plume area."

Pictured: Deputy Morel has met campaigner Sarah Simon, who believes that the health of many people living in the plume area, including her own, has been affected by PFAS.

He added that he was aware that the Government “struck a deal with the manufacturer of the foam some time ago", but maintained that this "should not stop Health looking at Sarah’s research and establishing the truth."

“It has been a long journey since the foam was used in the early 90s and I suspect there is a long way to go, but it seems that the Government hasn’t properly engaged in this," Deputy Morel continued.

“So, I want to push the Government to look into this so people can be assured that we are on their side. Getting to the truth is vitally important, not just for Sarah and those living in the plume area, but all islanders.

“Her research has taken the issue beyond the purely anecdotal but a more official line of enquiry is still needed, which she is campaigning for herself.”

Since Express first reported on Miss Simon’s concerns in the summer, a number of islanders have also shared their conviction that their health has been affected by drinking PFOS-contaminated water.

The Government recognises that PFAS is in ground water, particularly in the bay and Pont Marquet in St. Brelade, a water catchment area which flows from the eastern end of the Airport into St. Aubin’s Bay. The Environment Minister is asking for money in the Government Plan, which is being debated this week, to carry out studies to establish the extent of contamination.

The official line from Health is that there is no evidence to link PFAS to poor health, which is something strongly disputed by Miss Simon.

Posted by Steven Simon on Dec 15th, 2020
I read this with interest as somebody who has tested positive for PFOS in my blood.
Health might claim it doesn’t affect your health. But I’ve emailed the Health Minister to clarify who said Toxicologist we supposedly have access to as reported in the press. I’ve also asked for confirmation if we should be donating blood to the blood bank at the hospital, also should we be on the organ donor list.
Anyone who does research into this properly would soon realise that it does affect your health & I for one wouldn’t accept any blood from somebody who has tested positive for PFOS? Time to wake up SOJ
I am still waiting for a response from Health since 23rd November. Haven’t even acknowledged email.
Posted by Peter Garrett on Dec 15th, 2020
Surely the cheapest and obvious way forward is to establish whether or not PFOS in the blood is detrimental to health
If it is we need to do something
If not, what’s the problem
Perhaps I’m looking at it too simply ?
To place a comment please login Login »