ST. HELIER SOUTH HUSTINGS: A quiet 'night out' with the candidates 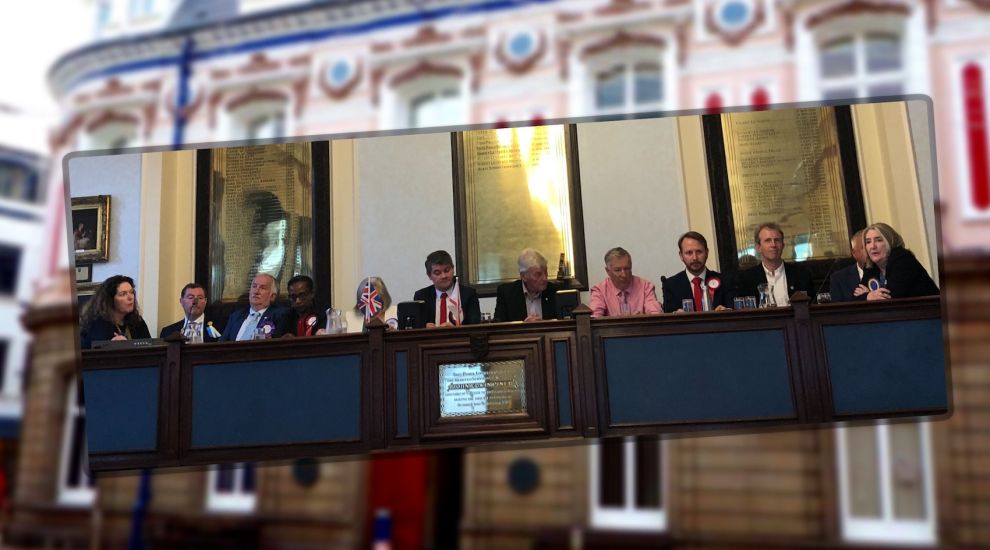 ST. HELIER SOUTH HUSTINGS: A quiet 'night out' with the candidates

The good news is that, on the face of it, the turnout at St. Helier South’s hustings on Friday evening would suggest that more young people than usual will be heading to the polls next week.

The bad news is that Statistics Jersey would likely deem the Parish Hall sample invalid for making such a claim due to its exceedingly small size.

And a good helping of those were not constituents. 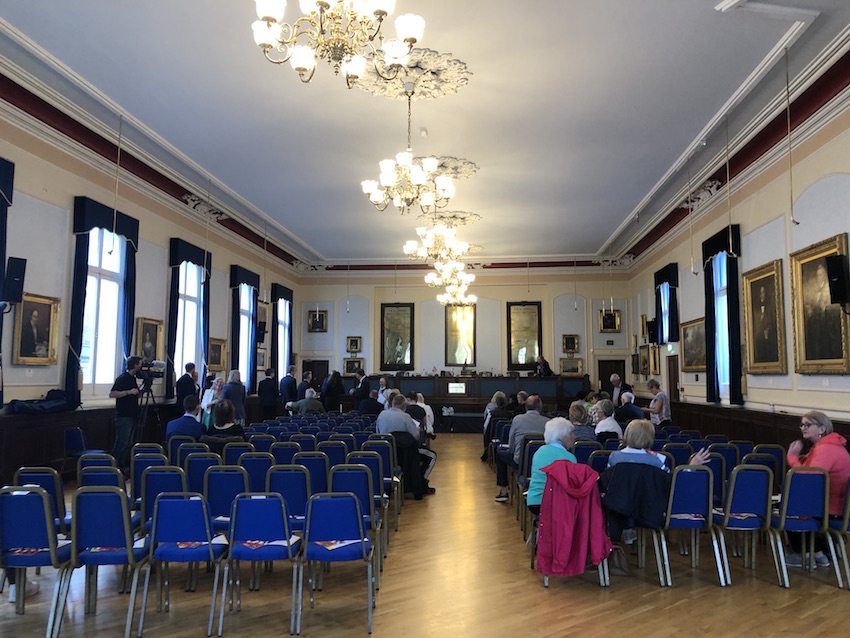 Pictured: The scene at 18:58, two minutes before the hustings began.

One was a cameraman filming the proceedings for Vote.je, and two were reporters.

St. Brelade Deputy candidate Karl Busch was inexplicably present (perhaps taking the chance to get to know his future potential colleagues or pick up some talent for his tea dance classes).

Chief Minister hopeful of the western super-district, Senator Kristina Moore, was also there to support colleague of the ‘Better Way’ movement, David Warr.

Presumably filled with Warr’s Cooper and Co coffee, the silver flask carried by the Senator no doubt became an object of jealousy for some attendees as the night wore on. One young girl rested her head on another’s shoulder as she scrolled through clip after clip of fluffy potatoes on Instagram (a squint confirmed that this was the algorithm’s answer to #pugs). 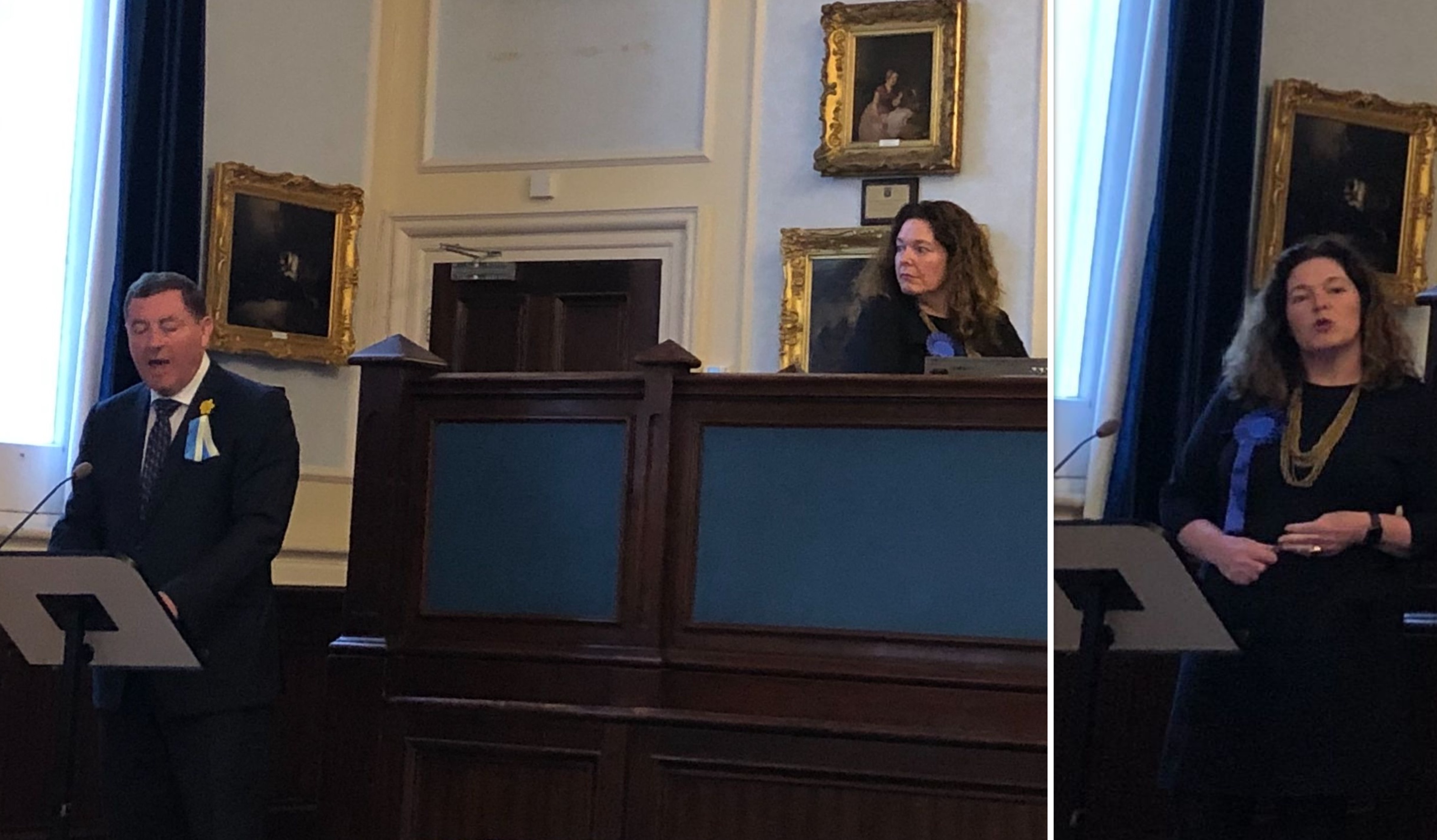 Pictured: Nick Le Cornu spoke from a stand, which Jo Luce also decided to use.

Even local blogger Mike Dun packed away his video camera and started reading the manifestos left on his seat cover to cover, while some of the candidates themselves were at points transfixed by the grand oil paintings adorning the hall’s walls.

That is no discredit to the candidates, but rather the symptom of having no crowd.

Without any audience to play to, there was little of the ‘hear hear’ and ‘boo-hiss’ drama that usually injects life into the election ritual.

So why were there so few in attendance?

Sure, it was a Friday night, as a passing car pumping Mufasa and Hypeman reminded us, but let’s remember (those offended by the C-word, look away now)...

There’s a housing crisis. A cost of living crisis. A recruitment crisis. The government is about to take on its most expensive ever capital project, and we’re going to be paying for it for a long time. There’s war in Ukraine. Oh yes, and we’ve just emerged from a soul-destroying pandemic, and now we’re being warned to ‘stay alert’ (again), lest we catch the pustule-ful monkey plague.

There’s an argument that, Occupation aside, things have never been so bad… so surely it’s time to act?

No? Fair enough, probably better to grab a pew and wait for it to all blow over. Mine’s an IPA, ta.

Rather than wringing hands over the Friday night scheduling fiasco, perhaps our candidates should have leaned into it - after all, the district holds nearly the entirety of the island’s nighttime economy.

Think drinking games à la ‘Never have I ever… (voted for…)’. Or perhaps karaoke at The Office? “If you wanna be my Member…”

These are the places to which this correspondent’s mind wondered, as thoughts began to engulf the vast emptiness of the Parish Hall as the clock edged closer to 19:00… Having each worked the room in about 30 seconds, most of the candidates spent the final five minutes clustered on the left, chattering amongst themselves.

The small showing was, perhaps, a sign that some people had already made their minds up on their chosen four representatives. Maybe they felt they had little more to gain from hearing their candidates speak. Has the advent of online manifestos and party politics really made decision-making that much more efficient?

Indeed, there were no shocks and surprises, positive or negative.

Reform Jersey trio, as to be expected, diagnosed the island as suffering from a cost of living issue and carefully described the antidotes their party believe will bring about a more equal society: introducing the Living Wage, removing GST from food and essential items and working towards affordable healthcare. Party leader Senator Sam Mézec was hot on his facts and figures, while there was sincere input from Central Market business owner Beatriz Porée on business struggles, while Tom Coles shone on how cost of living issues were forcing families apart and the failings of the mental health system.

David Warr was the eloquent voice of “it’s the economy, stupid”, promoting a narrative of diversification (agritech, FinTech, hemp…). He also queried whether zero-ten was still fit for purpose, and raised the question of whether GST should be removed from food (something he said he is not necessarily against, despite previous Twitter commentary, so long as the implications for Government revenue are carefully considered). 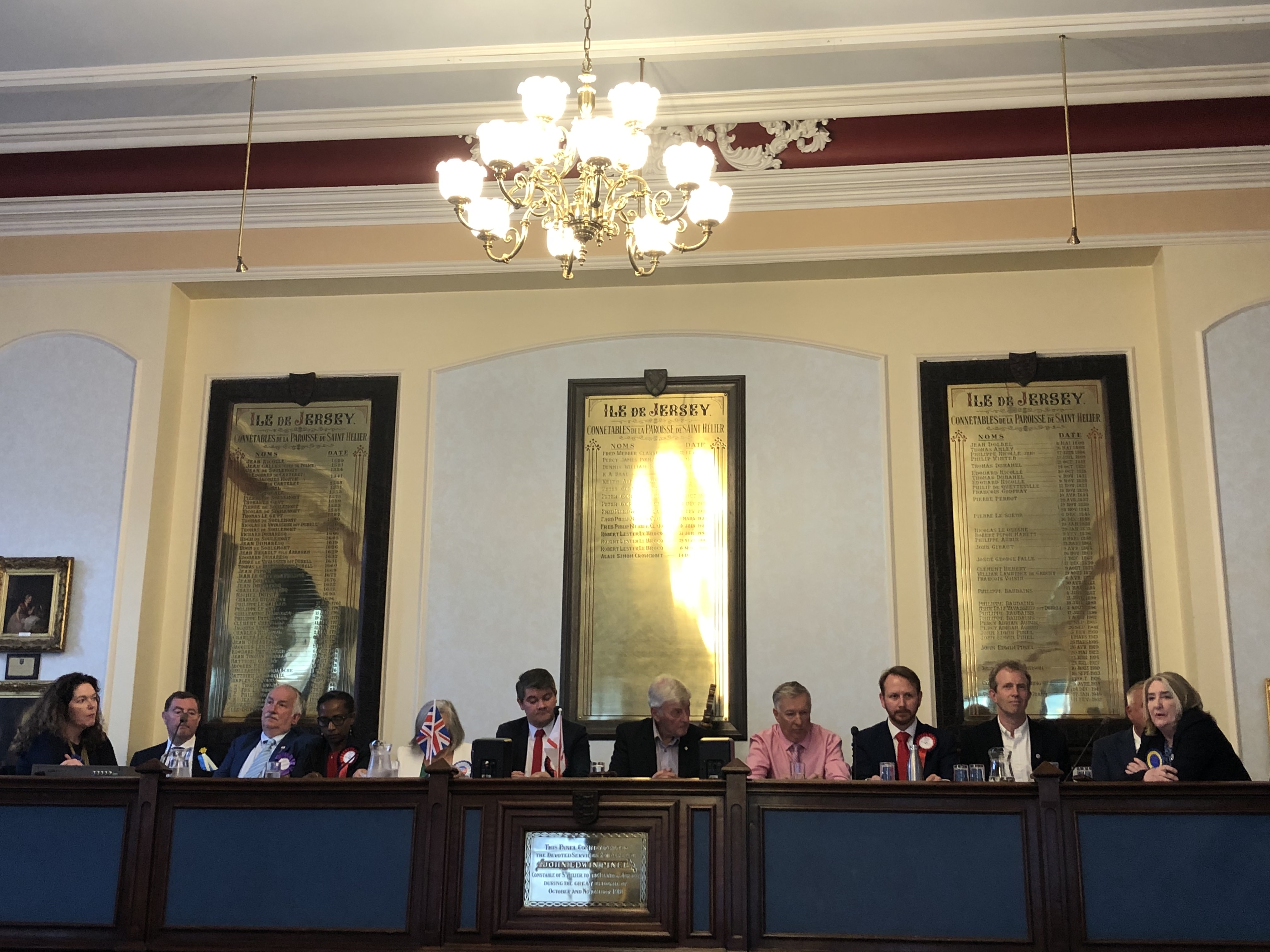 Pictured: Angela Jeune was partially covered by a flag.

Judy Martin, first elected in 2002, touched upon her long service - even harking back to the days of serving on the Tourism Committee and discussing the Opera House in the early noughties with musical former Deputy Imogen Nicholls - and her most recent milestones as Social Security Minister, such as increasing parental leave.

Under questioning, serving Deputy and Housing Minister, Russell Labey linked several island issues back to the underlying issue of housing affordability. He made the case that he should be able to continue the work he had begun when he picked up the Ministerial portfolio less than a year ago, including reinstating a Rent Tribunal.

The JLC-Progress coalition’s Angela Jeune - or, to those sitting on the right-hand-side of the hall, a talking Union Jack with a New Zealand lilt, as a flag was obscuring view of her - spoke strongly on accountability and cutting bureaucracy and management, specifically the “superstructure” in Health, which she said would “sink any ship”.

Chris Hopkins agreed, unhappy at the “massive waste” on locums. The former police officer and Traffic officer, who spoke with a cynicism and tone that somewhat echoed the outgoing Environment Minister, also firmly opposed the wastage in relation to public buildings.

True to form, Bernie Manning - founding Chair of the St. Helier Millennium Town Park Group, which sits in St. Helier Central - called for an extension to the town park, saying it should be allowed to continue onto St. Saviour’s Road.

Campaigner for a £15-per-hour minimum wage, Nick Le Cornu, was adept at bringing the ‘bigger picture’ with each question - the high cost of healthcare was the “price of hosting the finance industry”, he said, while Brexit was the fault of right-wing Tory ideologues who have complicated our access to French patés and saucissons secs.

He was yet more adept at providing eyebrow-raising moments:

Mrs Luce, of the ‘Party of Government’, was full of ‘badabingbadaboom’ energy. Cut the red tape!!!! “More talking, less walking!” Renegotiate with the French! Entente cordiale! Let’s get it done!!!! So energetic, in fact, that she nearly toppled a glass of water over Chris Hopkins at one point.

While there were different energies to their answers, the message from all candidates was broadly similar: addressing housing prices and the rising cost of living which is driving so many people away and fuelling cross-sector recruitment difficulties, and restoring a sense of true accountability must be the priorities of the next Government. Wouldn't we have still come to this conclusion sans hustings?

What was perhaps more revealing were the questions asked by those in the audience and accounts provided alongside.

Translating a question on behalf of her father, a young islander eloquently described the struggle of staffing a small scaffolding business - something fuelled, perhaps ironically, by the housing supply shortage.

One St. Helier-based mariner could barely conceal his ire as he noted how France seemingly had the upper hand in the fishing licence dispute - despite blockading Jersey’s harbour and threatening to cut electricity - as they had been given authority to fish in island waters freely, while Jersey fishers have been denied such a privilege by political figures across La Manche.

One lady spoke, voice near-trembling, of children’s lacking mental health support, and the tragic recent consequences of this.

Some attendees appeared to simply be on the hunt for factual answers to questions: How is it that the Government’s pension scheme seems to be so much greater than the private sector? How much is Health costing us? What is happening to the Opera House, is there a plan?

Such factual queries were carefully fashioned into a more answerable format for candidates by the Chair, the legendary figure of Roy Le Hérissier, courteous yet unafraid of cracking the whip if candidates spoke for too long (fortunately, this only happened once).

Another islander, drawing the only hearty applause of the evening, just wanted the doors open to Government again. Literally. When can we speak to a human again? Candidates, will you pledge to open up to the public?

Perhaps, that is the lesson to take away. In an island with some of the world’s lowest engagement levels, maybe there ought not only to be more listening, but more effort to make people feel listened to.

Posted by Scott Mills on Jun 13th, 2022
last supper springs to mind. More empty seats than taken. That's jersey politics for you....absolutely pathetice. Lee Cornick.....come on stick to DJ's, entertaining and radio. Mezec needs to do one as well. I'll always miss the IT and education Tsar of Jersey, Scott Wickenden. I've heard he's branching out in the wine industry....tip...don't drink you own stash. Pot is the pot people
To place a comment please login Login »