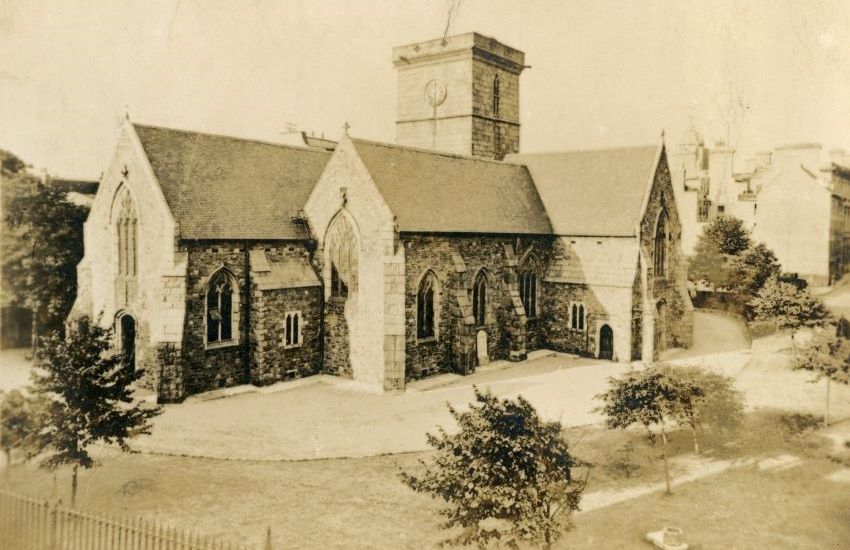 At any given point in time, local news outlets have never been short of reports of tavern brawls, public disturbances and general drunkenness in the area surrounding the Town Church.

A possible reason for this is that, since the mid-19th century, there has always been a high density of public houses and other licensed premises in the area, particularly along Mulcaster Street.

This is reflected in the St. Helier Honorary Police incident books of the early 20th century, which contain countless entries relating to individuals being fined and arrested for drunkenness, being incapable and causing public disturbances.

Rarely did such incidents escalate any further.

However, on the evening of 13 December 1845, “a respectable house in Mulcaster Street, generally frequented by the better class of seamen” was the scene of what the 'Jersey Times' described as “one of the most appalling murders which probably ever took place within the circle of the Channel Islands”.

CLICK TO ENLARGE: Patrick Welsh (30) is recorded as having been drunk and incapable on Mulcaster Street, 10 January 1910 in a St. Helier Honorary Police incident book.

The incident followed a brawl between two sailors – John Noon, of the Comus, and Thomas Hodge, of the Siren – at an inn kept by William Le Gros.

Hodge is said to have been having supper with his fellow lodgers and sailors when Noon intruded upon their “innocent hilarity” and started to cause a scene. The landlord made exception to Noon’s use of foul language and ordered him to leave. When he refused, Hodge attempted to escort Noon off the premises.

In the fracas that followed, Hodge was stabbed in the thigh with a large knife, and a brawl broke out, during which Noon scarpered.

When Constable’s Officer Jean du Parcq arrived on the scene, he found Hodge lying dead on the floor.

Centenier George Le Cronier, who himself was murdered just two months later during an unusually violent period in the island’s history, went out in search of Noon with Constable Pierre Le Sueur and others, eventually finding him asleep aboard the Comus.

Noon denied all involvement and resisted attempts to take him ashore, and when eventually placed in a cell, he became extremely violent.

A long French blade was found in Noon’s cabin and with numerous eye-witness statements placing him at Le Gros’ tavern and identifying him as the assailant, Noon was charged with murder and brought before the Royal Court. 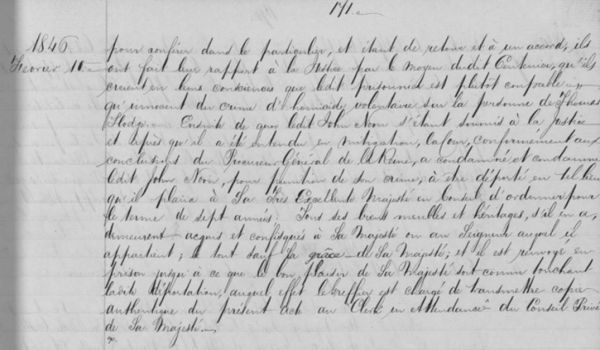 CLICK TO ENLARGE: A jury found Noon innocent of the crime of wilful homicide.

An inquest report heard on 15 December 1845 concluded that Hodge’s death was caused “by stabbing, deliberately, by John Noon”.

At the trial, which commenced that day, Noon, represented by Advocate Godfray, entered a plea of not guilty. Constable Le Sueur proceeded to set out the case for the prosecution over the course of five hearings up to 19 January 1846.

During the trial, multiple witnesses were called, including the landlord, Le Gros, and his wife, Hephzibah Nesbitt, and the evidence presented to the Court included Hodge’s bloodstained clothes, the knife said to have been used in the attack, and items of clothing identified as Noon’s, found at Le Gros’ inn. 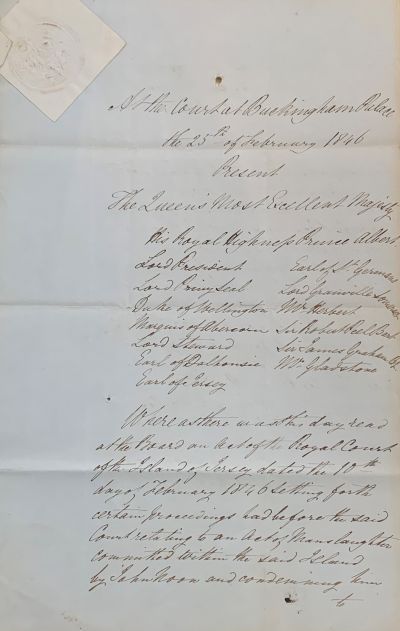 CLICK TO ENLARGE: The trial was recorded at the Court of Buckingham Palace, with Queen Victoria and Prince Albert present.

On 10 February, a final hearing was heard before a Grande Enquete of Jurats, and a thirteen-man jury.

Noon admitted to stabbing Hodge but denied that he meant to kill him. His defence was accepted, and he was found innocent of the “crime of wilful homicide”, but guilty of manslaughter. The Court sought to petition the Queen for a sentence of transportation for seven years.

Two weeks later on 25 February 1846, a report on the legal proceedings in the trial was recorded at the Court of Buckingham Palace, with Queen Victoria and Prince Albert present.

The Royal Court’s findings were upheld and the Queen ordered that Noon be transported for seven years from Jersey to Van Diemen’s Land, now known as Tasmania, or an adjacent island, for the manslaughter of Thomas Hodge. 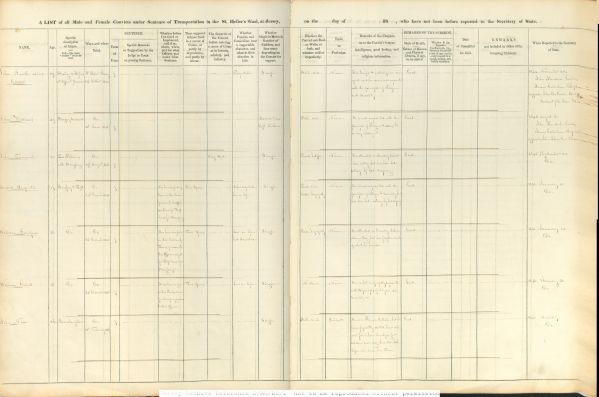 CLICK TO ENLARGE: The transportation register shows Noon left the island and reported to the Secretary of State on 7 March 1846.

An entry in a transportation register records that Noon was transported for the crime of manslaughter and reported to the Secretary of State on 7 March 1846.

What became of him after that remains unknown.

This article, put together by Trainee Archivist Harry Le Feuvre, touches on just some of the many stories about the Town Church and surrounding area.

If you would like to find out about more stories from the Town Church and its surrounding area, Jersey Archive will be hosting a free online talk about the area at 19:30 on Wednesday 25 August as part of its ongoing 'What's Your Town's Story?' series. CLICK HERE to register to listen.

Pictured top: A view of the Town Church from Bond Street (c. 1900). (All images courtesy of Jersey Archive)