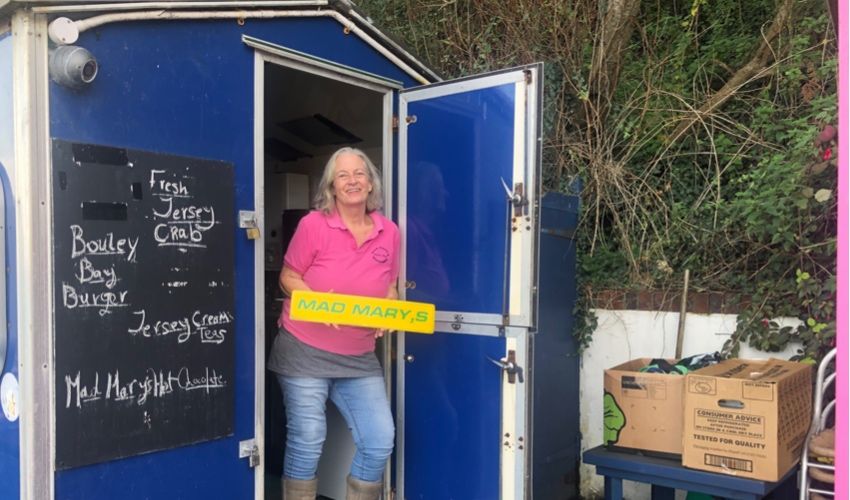 The owner of a much-loved café in Bouley Bay, who feared her business would be forced to close by the redevelopment of the Water’s Edge Hotel, has said she is overjoyed after being offered a new lease.

Mary Tunney, who has run Mad Mary’s Bouley Bay Beach Café for the past 18 years, said that the new arrangement was a “lifeline”, allowing her to stay by the eastern steps down to the beach for another six years beyond her current lease, which expires next September.

Her kiosk has been the only place to buy food and drink in the bay for a number of years.

Mrs Tunney’s future has been uncertain since plans were submitted to redevelop the nearby hotel. The owner first put in plans in 2012 to create 25 self-catering apartments. This was approved but a new application was submitted last year to knock down the hotel and build a single luxury residence, with dive centre and café.

The Planning Committee is due to decide that application on Thursday. It is recommended for approval by its Planning Officer and has been deemed compliant with the Bridging Island Plan, against which all planning decisions are judged.

Mrs Tunney said: “I am totally overjoyed and relieved beyond words that, owing to the applicant, Mary Mary’s will be here for many years to come, obviously subject to the decision of the Committee. Thank you to all, locals and tourists alike, for your amazing support.”

Pictured: An artist's impression of what the new development will look like from across the across Bouley Bay. (MS Planning)

It is understood that her landlord, which is group of tenants who own the local fief, and the prospective owner of the hotel, have come to an arrangement to offer Mrs Tunney a lease, and also stabilise the rock face above her café, which has subsided in the past.

This is subject to the application getting permission and a majority of the tenants agreeing to sell the strip of land to the prospective owner.

The planning application includes a commitment by the owner to keep the dive centre open and maintain the cliff path to and from White Rock, which runs through the hotel’s land.

A second application has been submitted to construct a temporary dive centre on parking spaces by the bus stop while building works take place, if they are approved.

Again subject to permission, spaces will be created in front of the wooden chalets further up the hill to replace those lost by the dive centre's temporary move.

The Water’s Edge application has been controversial. Previous Environment Minister John Young ordered that it be subject to an independent planning inquiry, but this was overturned by the Royal Court.

Current Environment Minister Deputy Jonathan Renouf then said that the matter should be determined by the Planning Committee, a group of politicians who decide contentious applications but not to the level where an inquiry is deemed appropriate.

Committee Chair, Trinity Constable Philip Le Sueur, will not take part in deciding this application on Thursday, having already expressed his support for the project in his role as head of the parish.