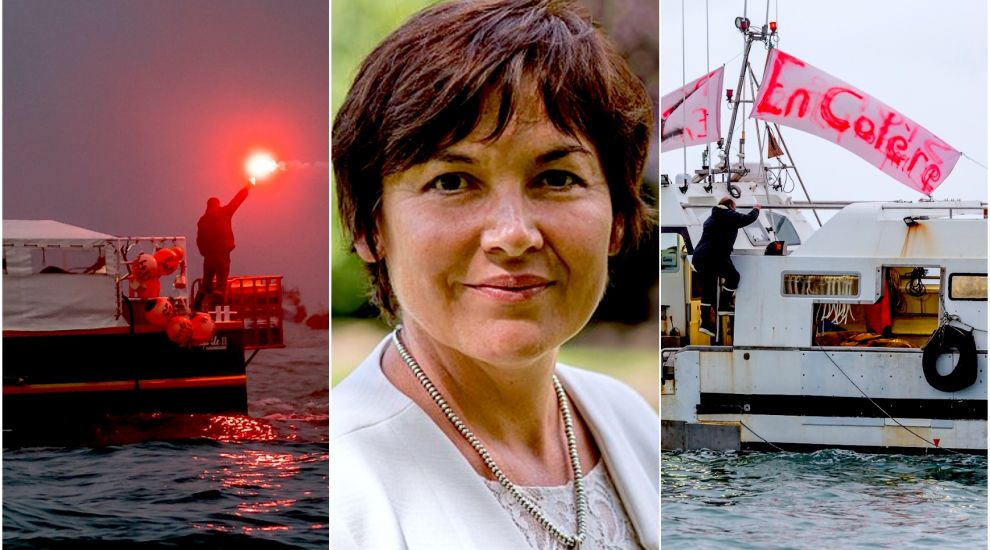 The fishing row between Jersey and France appears to have narrowed to 13 boats and whether their owners acquired the right to work in local waters in vessels that have since been replaced.

She added: “And of course, we also want a precise calendar to tackle all the other topics, such as temporary licences and technical measures.”

On Monday, France delayed taking retaliatory measures against the UK and Jersey – due to come in yesterday – until UK Brexit Minister Lord Frost and France’s Europe Minister Clément Beaune meet on Thursday.

However, Mme Girdard told the Assembly that she wanted to UK response, by last night, on a document detailing the conditions for obtaining licences for the 14 vessels in the 6-12 nautical mile zone.

“We want to have a conclusive meeting organised tomorrow [Wednesday], presided by the European Commission – that’s its role – on replacement vessels,” she said.

It is not yet known if she received a UK response by last night. 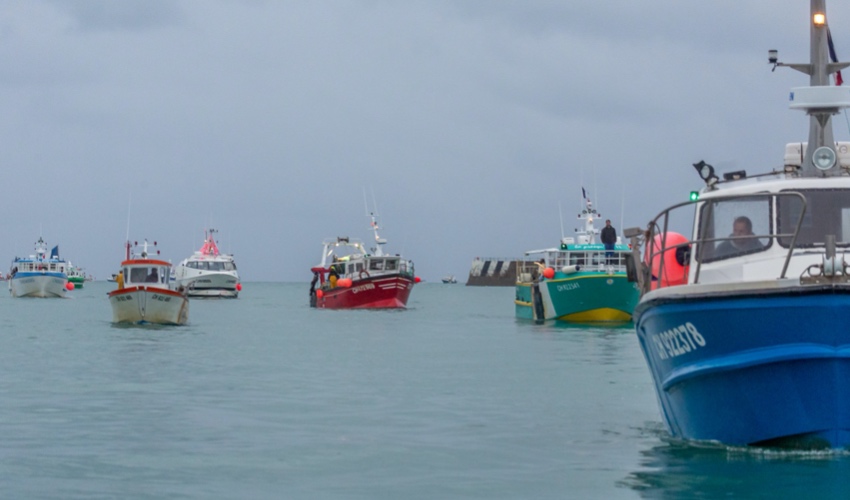 Pictured: French fishermen protested outside the Harbour in May.

External Relations Minister Ian Gorst confirmed to the Guardian yesterday that the issue of replacement vessels was a sticking point.

However, he added that he hoped for an early resolution.

“There are some issues around replacement vessels that we can sort out earlier than we might have envisaged, that is for both us and the UK,” he said.

“I think that would be quite a good way to move things forward and allow more time. Of the vessels that the EU is asking us to reconsider, at least a handful, about five or six, are replacement vessels …

“The French have taken the view that it is better to try to deal with the individual vessels than trigger countermeasures whereby everybody will become entrenched.”

“For boats less than 12 metres, which required the most work from our regional committee, 48 Norman boats, out of 79 licences, have permanent access, 20 remain in the provisional ‘orange’ category, out of a total of 49, and eight had to stop fishing on Sunday because they had no licence.

“The British only seem to want to accept ships that are identical in all respects, while new or recent boats can only present technical developments.

“But some shipowners have acquired rights through prior fishing experience with their old vessel. And there are also young people who have just moved in, and they don't have any.

“With Jersey, this is the case with about 15 boats. You would expect that Jersey will line up with London’s position.”

Pictured: UK Prime Minister Boris Johnson briefly addresses the fishing issue at the end of a press conference in Glasgow on Tuesday.

Mr Johnson told a reporter: “On our relations with France, I really renew what I’ve said before: we are working very closely with our French friends and partners on the things that matter most to the people of the world, which is tackling climate change and reducing CO2.

“By comparison with that hugely important issue, the ones you mention are vanishingly unimportant, but since you ask whether the UK has changed its position on the fishing issue, the answer is no.”

A European Commission spokesperson told Express last night: "Talks continued today. It is positive and reassuring to see contacts aiming at a solution. Technical meetings to resume on Wednesday."

Yesterday, Chief Minister John Le Fondré told Times Radio that he found it “difficult to understand” why many French boats hadn’t been able to produce the required information because the previous Bay of Granville agreement “laid down requirements for them to record their fishing records.”

During May’s flare-up in fishing licence tensions, which resulted in scores of French fishers storming St. Helier harbour, Home Affairs Minister Deputy Gregory Guida said that the paperwork sent to Jersey up to that point was full of “horreurs”, including missing and duplicated documents.

Both Ministers confirmed the island had resorted to buying commercial information to plug gaps in the information provided by France.

I was going to cover EACH of GIRARDIN,s WANTS on this article and quickly realised I had set myself a massive task regarding the plethora of her WANTS!

May have been needy as a child? < - delete if necessary.

WHAT Annick wants is NOT down to ANNICK as it IS Jersey Waters and she should be less bullish & try a bit of reasonable action rather than antagonistic behaviour!

Maybe Jersey/Gsy/Uk should bombard WANTER Girardin with a "raft" of wishes which are in no way a legal or moral entitlement!

This should send her into a frenzy for some time & we can all get back to fishing our respective waters?
Posted by Donald Grigg on Nov 3rd, 2021
I wonder if once a licence is awarded whether the owner can then sell that licence to another boat. If so it would explain the number of small boat requests
To place a comment please login Login »