Looking back: King George II statue accused of being a fake 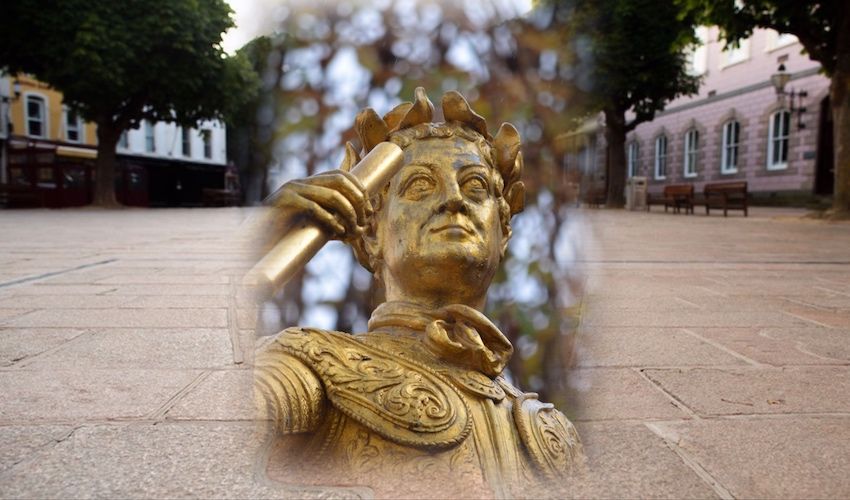 Looking back: King George II statue accused of being a fake

The Royal Square's statue of King George II could in fact be a cheap repurposed rendering of Julius Caesar, according to a diarist.

The accusation came from W T Morley in his 1700s 'Diary of a Visit to Jersey' - and is one of many controversies and incidents to have surrounded the familiar figure over the centuries.

Over the 268 years that it’s been on display, King George II (if that's who he really is...) has not only been denounced as fake, but been shot at, and tarred and feathered too! Historians look back at the life of Jersey’s oldest piece of public sculpture…

"The statue of George II has been in place since 1751, when it was unveiled at a grand public occasion attended by the Lieutenant Governor, the Militia and a large crowd.

Pictured: The well-known Royal Square fixture is the oldest piece of public sculpture in the island. (Jersey Heritage)

Designed by John Cheere of London, a designer and manufacturer of lead and plaster statues, his George II is dressed as a Roman Emperor with heavy, ornate robes, a laurel leaf crown and staff of office. The only things that signify that he is a King of England are the Garter decoration and his name inscribed on the plinth.

The statue’s first ordeal is thought to have been the Battle of Jersey, fought in the Royal Square in 1781. The statue appears in John Singleton Copley’s famous painting The Death of Major Peirson surrounded by the swirling action and smoke of gunfire.

When the sculpture was being restored in 1997, several bullet marks were discovered under the many layers of paint and filler, and it seems likely that the statue was an unwitting victim of that day’s musket fire.

Pictured: The Royal likeness features in John Singleton Copley's famous portrayal of The Death of Major Peirson at the Battle of Jersey. Pictured here is William Holyoake’s version of the painting. (Jersey Heritage)

Having survived its first taste of actual warfare, it was then subjected to some ridicule in the years that followed. The authenticity of the sculpture was questioned as early as 1798, when diarist William Taylor Morley recounted that the public had been duped into believing this was George II, and that it was in fact a cheap lead copy of an old figure of Julius Caesar (W T Morley’s Diary of a Visit to Jersey, Sept 1798).

In 1842, the portrait was even likened to having “the fantastic attitude of a ballet master” (Guide to Jersey, Kandich 1842).

The poor statue’s low spot may have come in 1876, when the British Press and Jersey Times reported that the statue had been tarred and feathered – a sign of the esteem in which the public held the sculpture. Lillie Langtry, in her autobiography, 'The Days I Knew', wrote that it was her brothers that carried out this escapade “tarring and feathering this royal and stony individual”.

Pictured: Lillie Langtry said it was her brothers who tarred and feathered the statue. (Jersey Heritage)

It is perhaps no surprise then that the sculpture has required some maintenance and restoration over the years. It was re-gilded in 1897 and sent to London for repairs in 1910. Nothing more was done until 1997, when it went through a period of major restoration. The specialist restorers found that the sculpture had up to 37 layers of various materials including gesso, undercoat, gold size, gold leaf, two dark, almost black layers and one containing fine copper cuttings.

These layers were removed using solvents and some remaining residue was removed using a laser. A damp, crumbling core was extracted from inside the sculpture, as was its heavily corroded internal iron support frame that was replaced with a stainless steel one. The whole sculpture was then gilded and re-gilded again some years later.

Now restored to its former glory, it will hopefully have nothing worse than pigeons to deal with in the years to come!"