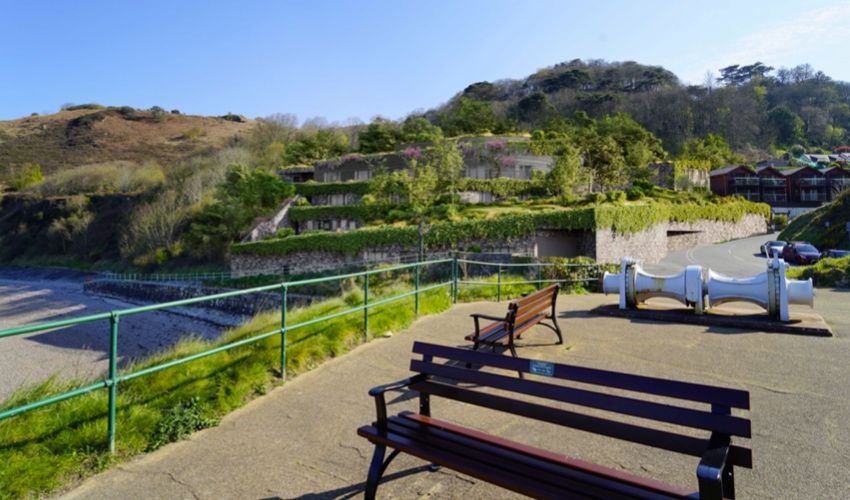 Plans to demolish the Water’s Edge Hotel in Bouley Bay and build a large single luxury home in its place have been approved, drawing to a close a long period of public and political debate.

This morning, the Planning Committee – a group of politicians who decide on more controversial applications – passed the scheme by four votes to two.

It paves the way for the hotel – which first opened more than a century ago but was expanded significantly in the 50s and 60s – to be knocked down. Replacing it will be a single home for a family who will buy the hotel now that the scheme has been approved.

The stepped house will include separate accommodation for guests and staff, a tennis court, swimming pool with pool house and an office at its highest point.

The owner has also committed to build a dive centre and café on the ground level of the property. He has also signed up to legal obligations guaranteeing that hill climb will not be affected and the cliffpath to and from White Rock, which runs through the hotel’s land, will be maintained.

Separately, the owner has signed a legal agreement with owner of Mad Mary’s Beach Café, Mary Tunney, to offer her a six-year lease beyond when her current lease expires next September.

Pictured: An artist's impression of what the luxury development will look like coming down the hill.

The kiosk sits on land currently owned by a group of tenants of a north-coast fief; however, it is understood that a majority of those landowners support selling the land to the prospective owner.

The chef tenant, Dame of Rosel Emma Lemprière-Johnston, spoke in favour of the development at the Planning Committee meeting.

One member of the public, Naomi Stirling, spoke against the development at the meeting, expressing her concern that a large part of the bay would be owned by one individual.

Although not against the scheme, Deputy Andy Howell, who lives above the bay and was a frequent visitor, said she had a number of concerns that she wished to be addressed through the signing of planning obligations, including access to the eastern stairs to the bay and controls on where construction workers could park.

Reading a statement from the family who will build and live in the luxury property, planning consultant Mike Stein said that the intention was “not to build a fortress but build a home”.

“We want to part of and live in harmony with the whole Bouley Bay community; we want to open up the bay not close it out,” read Mr Stein.

Chairing the meeting, Deputy Steve Luce raised a number of concerns – including the proposed building’s use of both brushed and Jersey granite – but said that, on balance, he approved of the scheme.

The single-home development will replace an already-approved scheme to knock down the hotel – which has been closed for ten years – and build 25 self-catered holiday apartments. This was given permission in 2012 but has never been taken up.

A second application to move the dive centre into temporary accommodation while the hotel site is redeveloped was rejected by the Planning Committee over concerns about the proposed location: the parking spaces next to the bus stop.