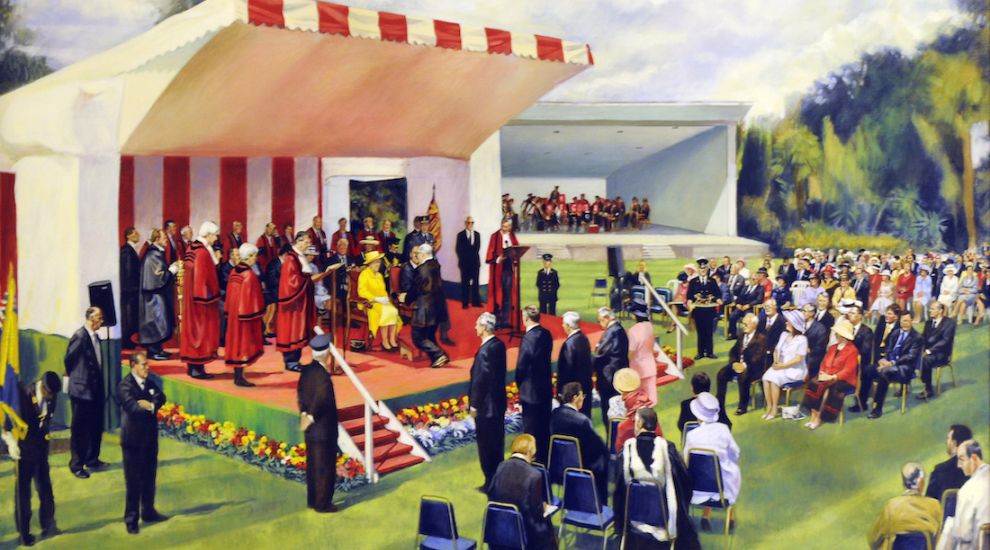 By the time the Queen made her fifth visit to Jersey in 2001, a year before her Golden Jubilee, the Queen’s personal world, and that of the wider world, had changed dramatically from that of her first visit in 1949.

This week, Express has been looking into each of Her Majesty's visits to Jersey.

By the time the Queen made her fifth visit to Jersey in 2001, a year before her Golden Jubilee, the Queen’s personal world, and that of the wider world, had changed dramatically from that of her first visit in 1949.

During that time, all four of her children had been married, three had subsequently been divorced, and one of them remarried.

She herself had dubbed 1992, the year of her Ruby Jubilee, her annus horribilis, marked as it was by the press’s revelations of the ‘scandalous behaviour’ of her children and a fire which had destroyed her beloved Windsor Castle.

In the wider world, the end of Communism in Europe had followed the fall of the Berlin Wall in 1989, whilst in Jersey the sixth post-war Bailiff was Sir Philip Bailhache. He had been just three years old when Elizabeth first visited.

Perhaps reflecting her age, the ever-increasing pace of life generally, or maybe a sign of how busy the Queen’s agenda had become, this was a whistle-stop visit, lasting just six hours.

In a break from her previous four visits, this time the Queen arrived in the island by air.

2,000 people gathered to witness the Royal helicopter touch down in the People’s Park at 10:00 on 13 July. After having travelled more than a million nautical miles, the Queen’s beloved Royal Yacht Britannia which had brought her to the island on two previous occasions had been retired in 1997. The government announced the cost of refitting her was prohibitive. Flying was also faster. 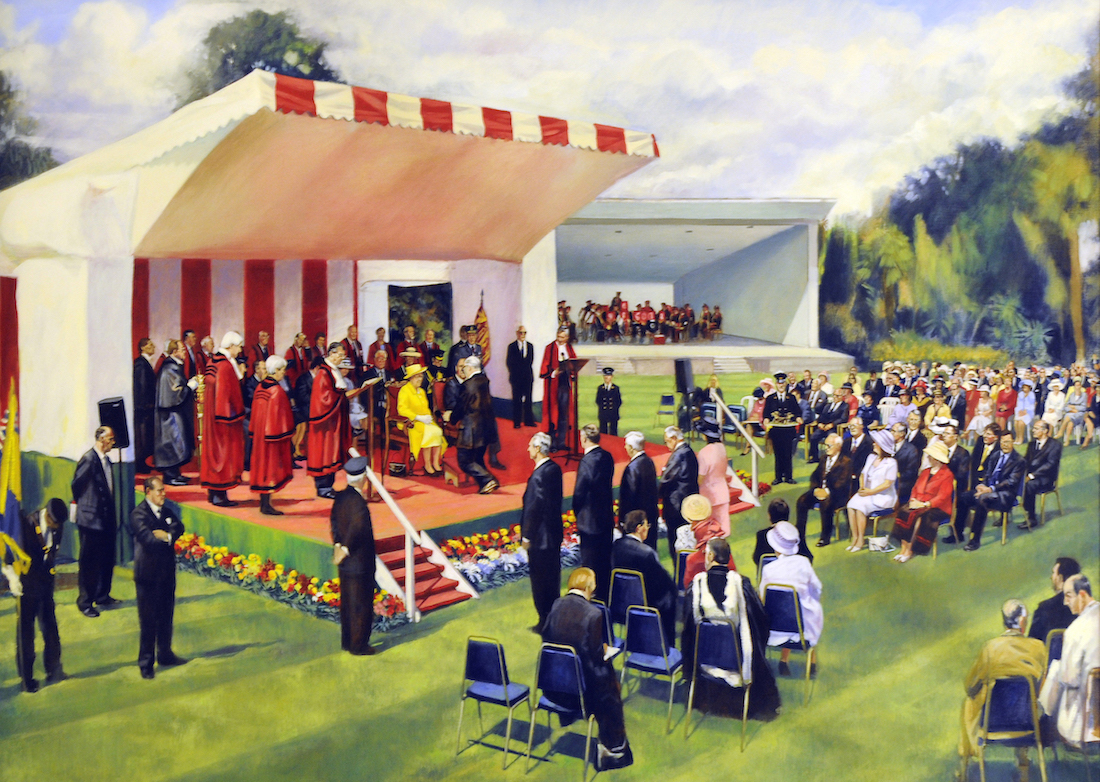 Pictured: The ceremony at Howard Davis Park was commemorated in a special painting by Jason Butler. (Jersey Heritage/GoJ)

In 2001, there was an outbreak of foot and mouth, a highly contagious viral disease that cattle are particularly prone to, across the whole of the British Isles, so like all visitors to the island at the time, as the Queen alighted, she had to clean the soles of her shoes by walking through a tray of disinfectant.

As protocol dictates, the Queen was then met by the island’s Lieutenant Governor, the ninth since the end of the Second World War, Air Chief Marshal Sir John Cheshire, and the Bailiff.

Once again, following tradition, she was presented with bouquets, this time from seven-year-olds Emma Beckford and Robert Wallis.

Also in-keeping with tradition, there was a special sitting of the States Assembly, and the island’s Seigneurs, or lords of the manor, swore their allegiance to the Crown. But, unlike the earlier more formal and stuff ceremonies of 1957 and 1978, which had been held in the Royal Court Building, these were more relaxed affairs and followed on from the 1989 ceremony which had been held in the grounds of Gorey Castle. This time, it was staged in Howard Davis Park.

Jason Butler was commissioned to produce a commemorative painting of the gathering in the park by the then-States of Jersey's Royal Visits Community.

The new location did not mean doing away with the new Seigneur of Trinity, Steve Morgan, having to perform the seemingly bizarre age-old duty of having to present her with two dead mallards on a silver tray, however.

This was something the national press made great play of, prompting Senator Pierre Horsfall and Deputy Imogen Nicholls to say it was time to bring the ceremony to an end. By way of a defence and an apology, it was pointed out that the birds had come from France, they are a protected species in the island.

In his Loyal Address, Sir Philip proudly proclaimed that in 2004 the island would be celebrating the 800th year of the emergence of its unique constitutional status and was proud of its strong links with the Crown, adding: “The loyalty felt by islanders towards the person of the Monarch burns as brightly now, as it did in medieval times.”

Before leaving the park, the Queen paused briefly to unveil a granite monolith marking her visit and the ceremony, before going on to meet some of the Islanders who had been patiently waiting in the background.

Next stop for the Queen, as it had been on a number of previous visits, was Victoria College.

For the Queen, it was then a short hop – although she travelled by car – across the road to officially open the new Jersey College for Girls complex, which, although extended and modernised, had once been College House, Victoria College’s dormitories.

During her visit, the Queen watched a short drama performance, and was given a bouquet. In a short speech, the College’s new Head Girl, Suzie Hughes, explained about the school’s book of pledges in which students and teachers had written down their promises to devote five hours of their time to helping the community.

The Queen was then invited to sign the book’s front page and unveil a plaque to mark her visit. The Queen also asked the school’s headmistress to give the students Monday 16 July as an extra holiday.

Whilst the Queen was visiting some of the island’s educational establishments, the Duke had his own duties to perform.

The first of these involved visiting the New North Quay to meet islanders who had taken up the challenge of his Awards scheme, including gold medal recipient Tye Nicholson. This was followed by visits to the lifeboat, the sea protection vessel and various historic boats before going to the Maritime Museum and nearby Occupation Tapestry Gallery.

Again, perhaps in a sign of the more relaxed and less aloof approach which the Queen and Duke had been steadily developing over the years, there was a break with the tradition of hosting lunch at a renowned gastronomic venue, which in the past had included the Grand Hotel, West Park Pavilion, the Hotel L’Horizon, and Jersey Potteries.

A ‘Grand’ feast at Highlands 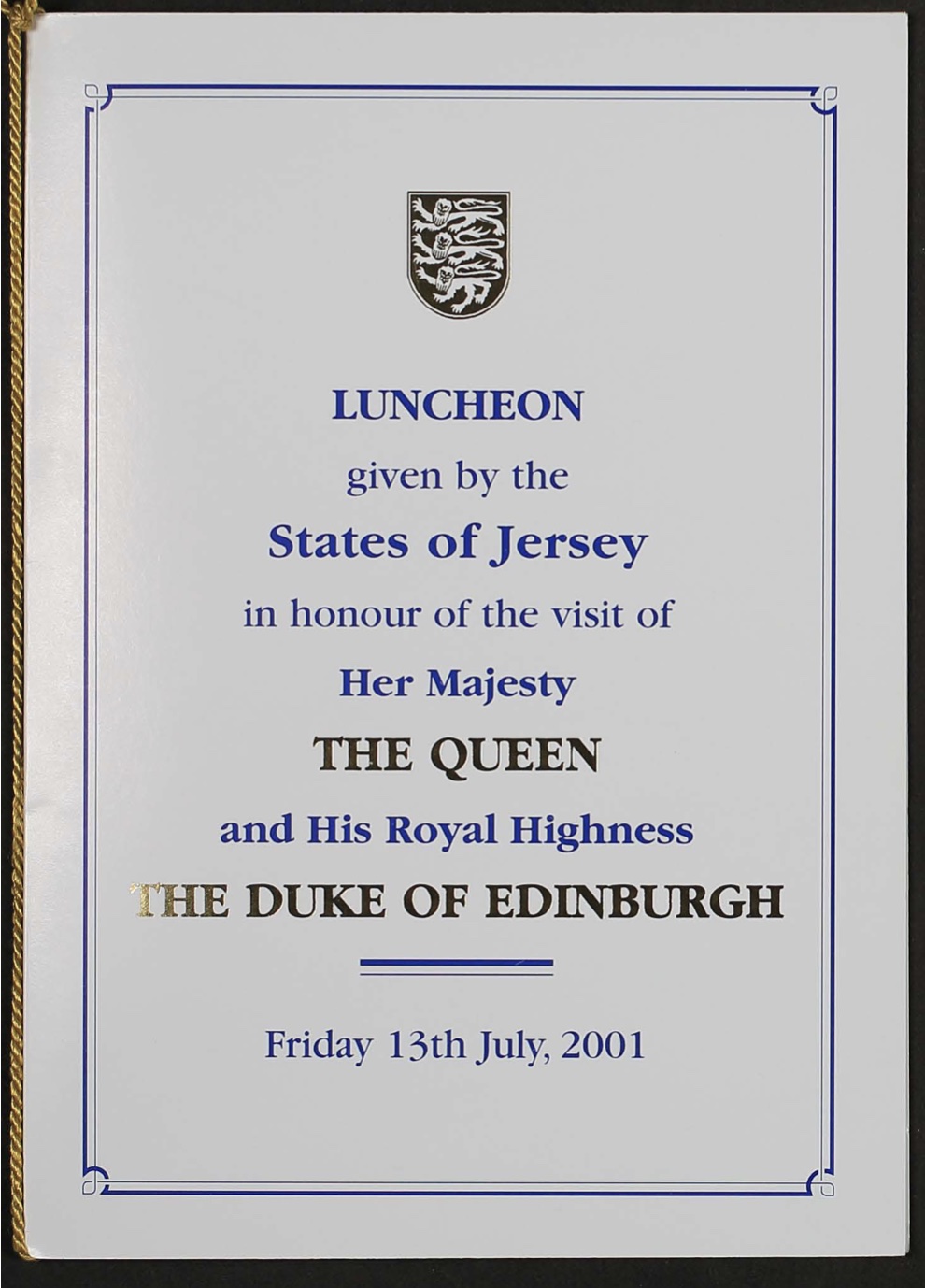 Pictured: The menu for the Queen's luncheon at Highlands - look at the gallery at the bottom of this article to see the full menu and guest list.

Instead, it took place in the Grand Hall at Highlands College – but that did not mean standards were compromised.

The feast of a starter of smoked salmon filled with Jersey crab, a main of half a lobster salad with Jersey Royal potatoes, and a desert of summer pudding, had all been prepared by a team of 52 staff under Longueville Manor’s award-winning chef Andrew Baird at the hotel and had been delivered to the venue.

In the afternoon, the Queen officially opened the Royal Jersey Agricultural and Horticultural Society’s new headquarters in Trinity.

The society apologised that, because of the foot and mouth outbreak, they could not stage a cattle show for the Queen as they had on most of her previous visits, but did promise, as they had done in the past, to give her a cow once the pandemic was over. 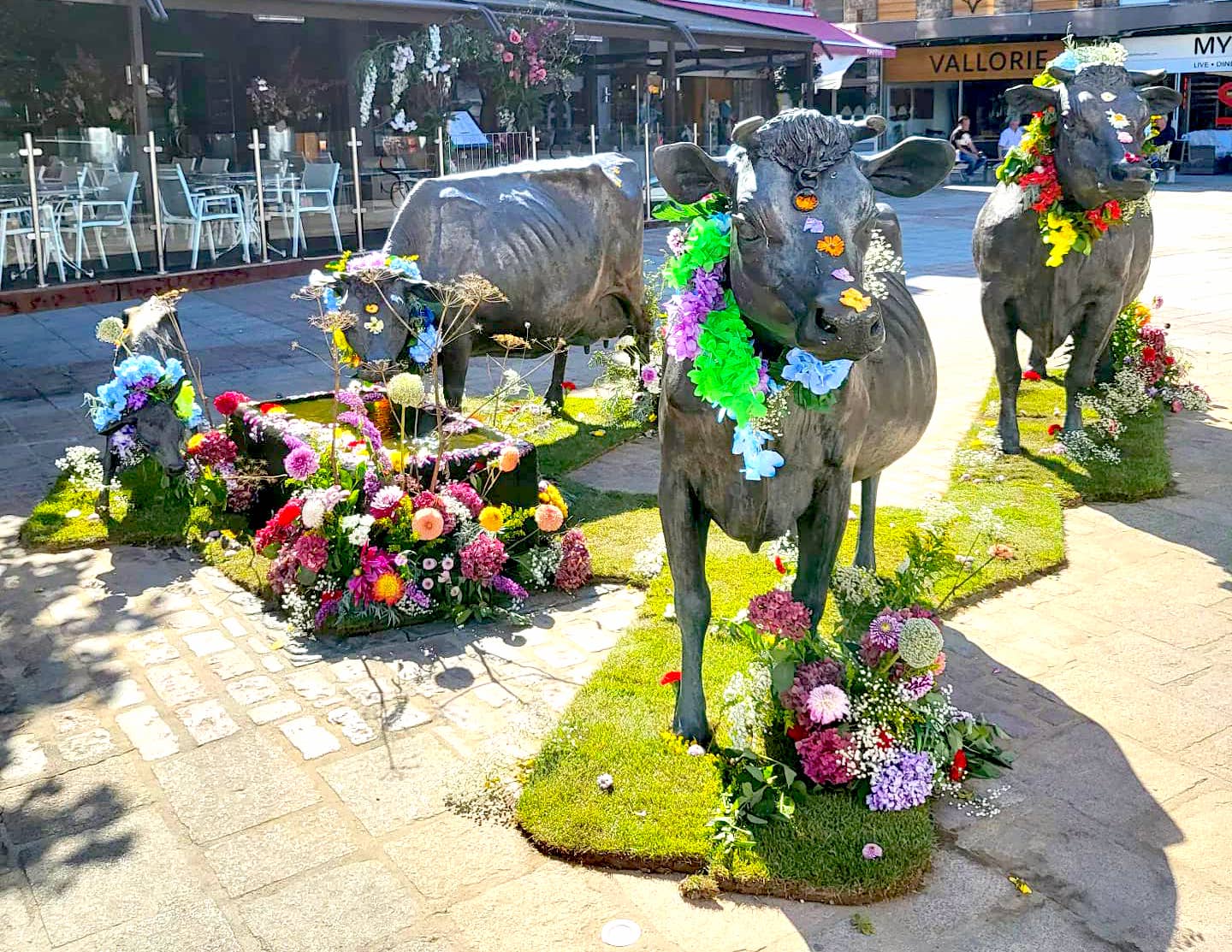 Pictured: The bronze cows, which were first shown to the Queen a the RJHS before being installed at West's Centre, remain a much-loved fixture of town today. (RampArts)

In the meantime, she seemed happy to make do with a pen and ink drawing of a Jersey cow sketched by five-year-old Charlee Hutchison, the winner of a local competition held to present the Queen with a work of art.

The Queen also came face to face with another work of art, the first in a series of bronze cows being cast to mark the fiftieth anniversary of the World Jersey Cattle Bureau, which were to be unveiled in West’s Centre in the centre of town later in the year.

The Queen and Duke were driven to Jersey Airport and left at five minutes to four in the afternoon.

Scroll through the programme below to find out how Her Majesty was welcomed at Highlands College, and what she ate. With thanks to Jersey Heritage for providing access to this document... 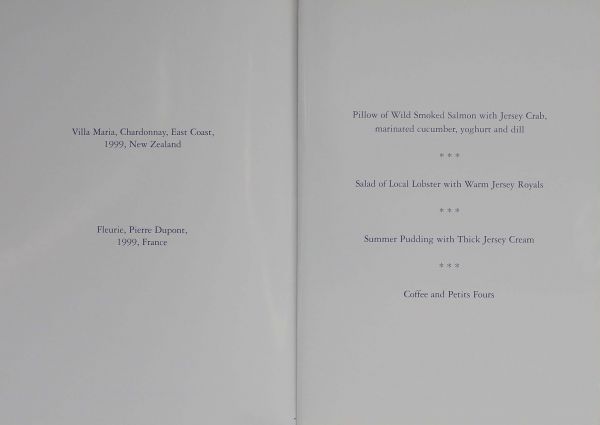 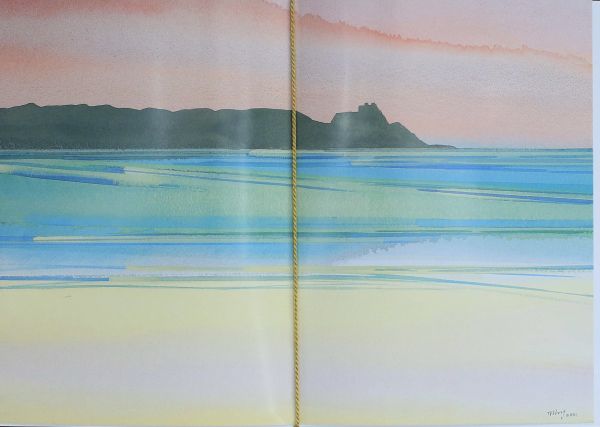 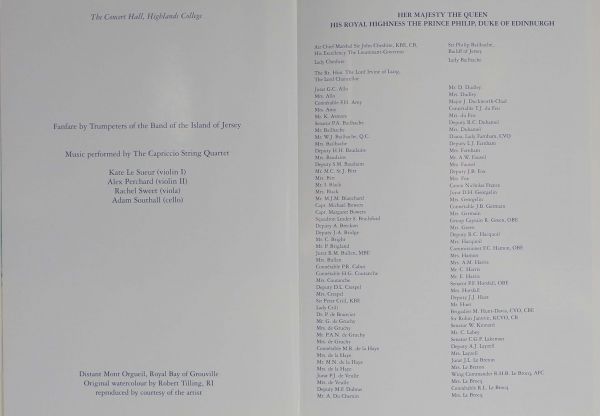 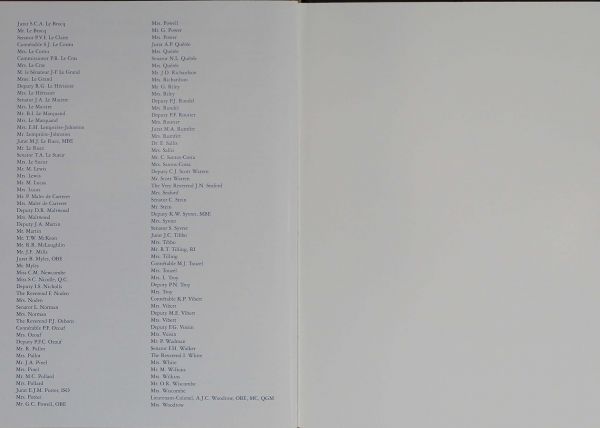