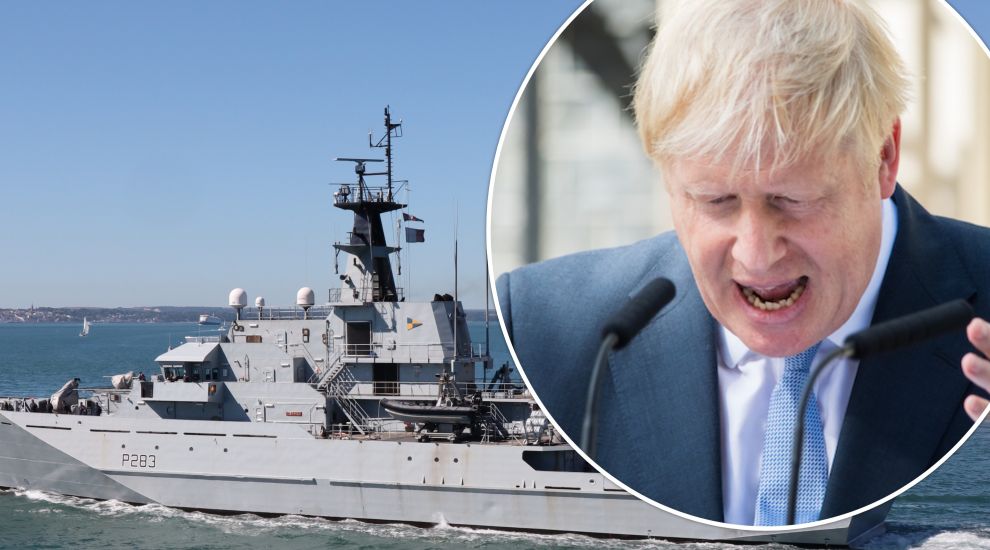 It’s understood that up to 100 boats were planning swarm the harbour at 06:00 – potentially preventing the movement of the cargo-carrying Condor Clipper – to demonstrate French mariners’ fury over restrictive fishing permit conditions they claim Jersey “unilaterally” imposed on them.

Express understands the island's Ports authority has been holding emergency meetings of its Strategic Command Group to draw up plans if the threat does come to fruition. The UK Government stepped in to offer its support.

A Downing Street spokesperson said just before 20:00: “This evening the Prime Minister spoke to the Chief Minister of Jersey, Senator John Le Fondré, and the Minister of External Relations, Ian Gorst, about the prospect of a blockade of St. Helier.

“The Prime Minister and Chief Minister stressed the urgent need for a de-escalation in tensions and for dialogue between Jersey and France on fishing access.

“The Prime Minister underlined his unwavering support for Jersey. He said that any blockade would be completely unjustified. As a precautionary measure, the UK will be sending two Offshore Patrol Vessels to monitor the situation.

“They agreed the UK and Jersey Governments would continue to work closely on the issue."

The Chief Minister and External Relations issued an official response in a statement just after 22:00, saying they expected tomorrow's demonstration outside St. Helier harbour by French fishermen to be "peaceful".

They said that Ministers and Government officials had met this evening "to ensure that the very best plans are in place to ensure islanders' interests are properly protected at all times" and that they remained "confident in our ability to do this."

They added that they "welcomed the ongoing support from the Prime Minister and UK Government to achieve a diplomatic solution" to the row, adding: "...We are aware that the UK are sending two offshore patrol vessels as a precautionary measure to monitor the situation in Jersey waters."

HMS Severn has already set a course for Jersey, while HMS Tamar is soon expected to be deployed.

HMS Severn and HMS Tamar are deploying to Jersey to conduct maritime security patrols. This is a strictly precautionary measure and has been agreed with the Jersey Government.

According to the Royal Navy, HMS Severn is a 1,700-tonne, 80m ship that has a top speed of more than 20 knots. It is equipped with one 20mm cannon and two general purpose machine guns.

The deployment to Jersey will be its first major outing since it became the first Royal Navy warship to undergo a major camouflage paint job since World War Two. 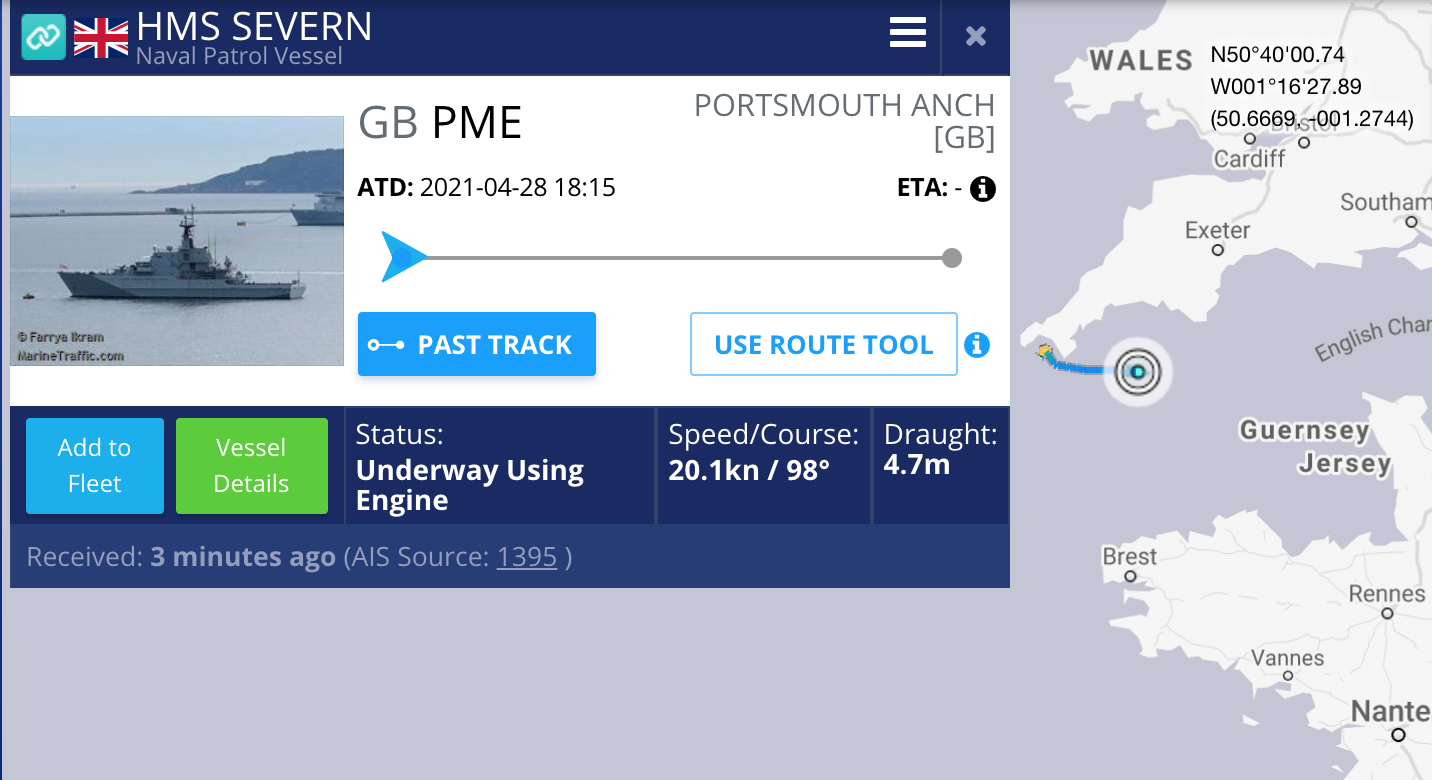 Pictured: HMS Severn on its way to Jersey. (Marine Radar)

The last time Royal Navy ships were deployed to resolve tensions between the Channel Islands and France over fishing was in 1993, when they were called to keep a watch on Guernsey's waters in a saga now known as 'The Cherbourg Incident'.

Following the Prime Minister's confirmation that the ships were on their way, Chief Minister Senator John Le Fondré immediately tweeted: "Grateful to Prime Minister @BorisJohnson for speaking with @Ian_Gorst and me this evening, and offering his wholehearted support in de-escalating the tensions between Jersey and our French neighbours over fishing access."

Grateful to Prime Minister @BorisJohnson for speaking with @Ian_Gorst and me this evening, and offering his wholehearted support in de-escalating the tensions between Jersey and our French neighbours over fishing access.

Senator Gorst tweeted: "My thanks to Prime Minister @BorisJohnson for his support and reassurances during our discussion this evening.

My thanks to Prime Minister @BorisJohnson for his support and reassurances during our discussion this evening. We will continue to work closely with the UK Government in order to resolve the current challenges diplomatically and avoid any unnecessary escalation

But not everyone is happy about this development - Assistant Economic Development Minister Deputy Kirsten Morel described the Navy's imminent arrival in Jersey waters as "so disappointing."

"A massive overreaction. Jingoism that Jersey does not need," he added.

So disappointing. A massive overreaction. Jingoism that Jersey does not need. @SkyNews https://t.co/fjoRSyvnoe

The move follows a threat by France's Minister of the Sea, Annick Girardin, to cut the island's electricity in "retaliation" at some of the conditions applied to French fishing permits, which included limits on the number of days at sea and restrictions on the zones they could visit.

“In the [Trade and Economic Cooperation Agreement signed in December], there are retaliatory measures… and we are ready to use them,” she told France's parliament, the Assemblée Nationale, yesterday.

"...Concerning Jersey, for example, there’s the transmission of electricity by under-sea cable, so we have the means - and I am sorry if it comes to this, but we will if we have to."

Jersey Electricity has assured, however, that, should this threat come to fruition, the island is still able to generate its own power.

The Government also maintained this evening that the island's "essential infrastructure will not be disrupted as local facilities are able to meet our power requirements in the event of any external interruption."

Following enquiries from our customers regarding the French fishing dispute, JE can reassure customers that in the unlikely event electricity supplies from France are disrupted, La Collette Power Station and Queens’ Road has capacity to supply Jersey’s electricity requirements pic.twitter.com/2W0WR3lGTf

The heightened rhetoric from the Maritime Minister followed a decision from the Manche and Normandy regions to sever their ties with Jersey by closing their office of 25 years, and Granville blocking Jersey fishermen from landing their catch there. French regional fishing committees are also calling on local businesses to stop buying Jersey products.

The Chief Minister and External Relations Minister said this evening that "diplomatic efforts" were continuing to "resolve the outstanding issues relating to fishing licences and to de-escalate the situation, and we will continue to liaise closely with the UK and French officials over the coming hours and days to achieve a pragmatic solution."

News of the Royal Navy making its way to Jersey has captured the attention of thousands of social media users - many of whom have begun posting '#JeSuisJersey' in solidarity with the island's plight.

Among them were controversial politician George Galloway, who shared the sentiment to his 366,000-plus followers, and TV presenter of documentary series 'Coast' and author of 'The Story of the British Isles' Neil Oliver.

Some have expressed fears that Jersey could set the scene for "the next Falklands".

Others accused Prime Minister Boris Johnson of a cynical ploy to boost opinions ahead of the elections across the UK tomorrow.

Presenter of GB News Colin Brazier joked that it was "a fitting way for the Royal Navy to mark the 200th anniversary of Napoleon's death".

A fitting way for the Royal Navy to mark the 200th anniversary of Napoleon's death. #jersey https://t.co/BxF9hWWcli

'Jersey' was trending in the United Kingdom on Twitter last night - the second most popular topic after the Champions League match between Chelsea and Real Madrid.

Numerous national UK newspapers are leading with the news on their front pages tomorrow, including the Telegraph, Guardian, Daily Mail and Metro.

CLICK TO ENLARGE: Some of the news outlets carrying the story on their front pages tomorrow.

Pictured top: An example of a Royal Navy Offshore Patrol Vessel (HMS Mersey) - two are being sent to Jersey to protect the island from a potential blockade tomorrow.