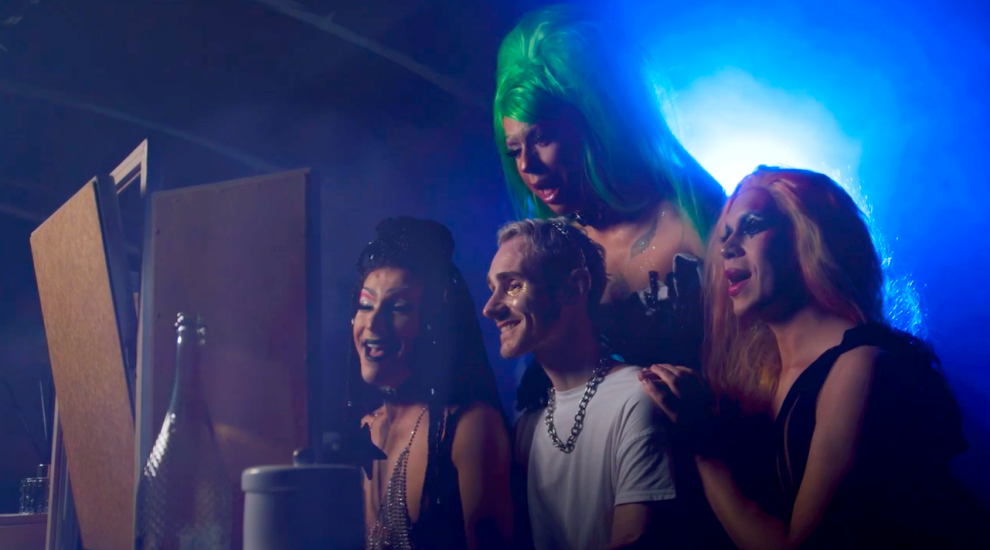 A local singer-songwriter has called on Cupid, his "fairy dragmothers" and other local creatives to get over a break-up.

Shea wrote 'Love & Lessons' after a relationship ended last spring and the music video for it was released this week.

At the time of his break-up, Shea was already working on a song with fellow local singer, songwriter and producer Le Montais (Rebecca Lewis).

“When I turned up to her studio I burst into tears!” he explained. “We talked through it and she said I should put it all into a song.

“She asked me the kind of vibe I wanted for the track and for the next hour she worked her music production magic and I wrote lyrics. At the end of the hour, we put them together and BAM! We had the foundations of ‘Love & Lessons’.”

“I knew I didn't want to write a sad song or ballad, I wanted something that said, ‘Thank you for this relationship, for the lessons and experiences. We are going separate ways but I'll take part of you with me.’ And I think we nailed it!"

Video: Shea worked with filmmaker Will Jack Robinson of Submarine Creative on the music video.

When it came to producing the video, Shea wanted to keep the positive vibes going.

“My background is in theatre as I trained as an actor, so I've always been a very visual artist,” he said. “I intend to create music videos for every single I release, and I love to challenge myself to produce something that people have never seen before.

“I started with the idea of being at a party post breakup and the ‘ex’ walking in. How would friends react? How could we create theatre in that moment?”

Having previously worked with filmmaker Will Jack Robinson of Submarine Creative on the music video for his first single, 'Superstars', Shea reached out to him again.

He also reached out to his close friend and “opposite” Kingsy, with whom he worked on for ‘Superstars’ and performed at the Channel Islands Pride 2021. The pair say they have a 'villain' and 'hero' dynamic when it comes to making music, with Kingsy's a "darker" take on pop. 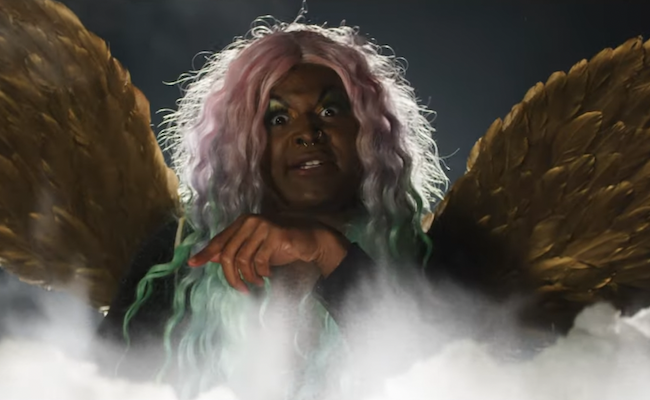 Pictured: Kingsy features as a "Cupid of breakups".

But Kingsy didn't carry that darkness into the ‘Love & Lessons’ video - instead appearing on a cloud as a "Cupid of break-ups".

Shea said he wasn't quite sure how he arrived at the idea - “Sometimes you don't question creativity, you just roll with it!”

“I knew I wanted to showcase their choreography so asked them if they wanted to do the video and they were all up for it!,” Shea said. “In fact, everyone I asked said yes - I got super lucky with the local talent!” 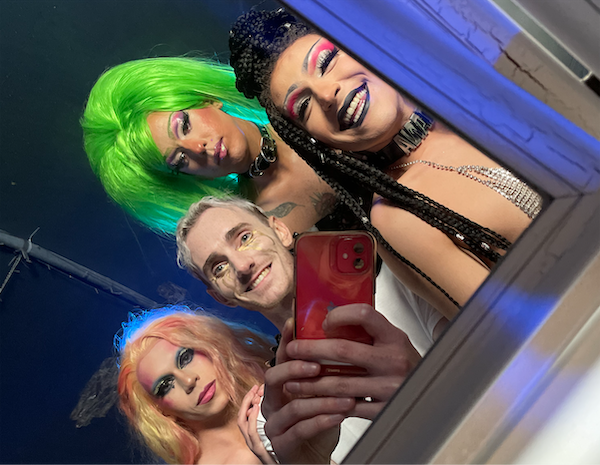 “I had the party goers in their pyjamas and dressing gowns, me at a dressing table mirror and even me on a bed with my ‘ex’, who was played by local personal trainer and performer Matti McGhee. He had a challenge as we dressed him in a morph suit that covered his entire body - even his face!”

The original idea behind Matti’s suit was to echo the album cover, an acrylic painting from Croatian artist Mario Romoda, which shows Shea hugging a figure made of blue and purple colours.

Pictured: The video was inspired by the album cover, an acrylic painting from Croatian artist Mario Romoda.

“I wanted to use the morph suit as a green screen and apply a galaxy of stars to his body,” he explained. “In the end we simplified the concept and leave audiences with a figure that is intriguing, disturbing and neutral, anyone can imagine their ex in the role.

“I knew I wanted to use the album cover colours, hot pink and blue, in the lighting and Will achieved this beautifully.

“I contrasted blue lights on the verse visuals, which are flashbacks into the past, with pink lights on the chorus visuals to celebrate the present moment.

“The final shots in the party make me smile because everyone there was really dancing and having a good time and singing along to the track - even before Will started filming!

“Overall, I love the video and have received some fantastic feedback on it.” 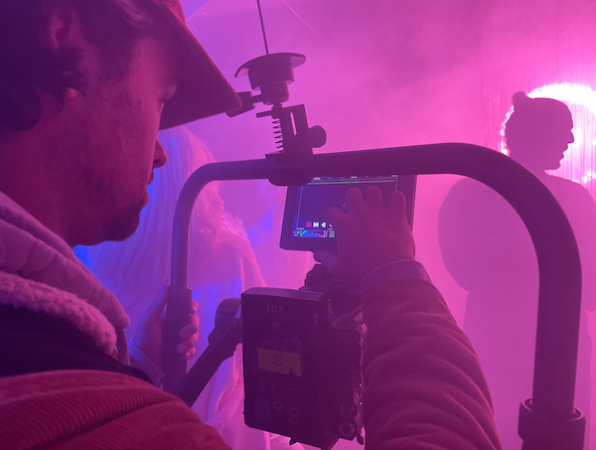 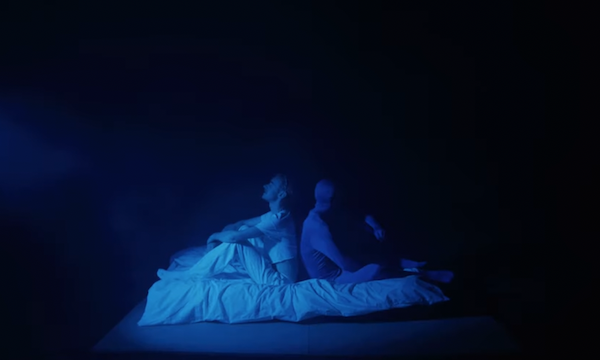 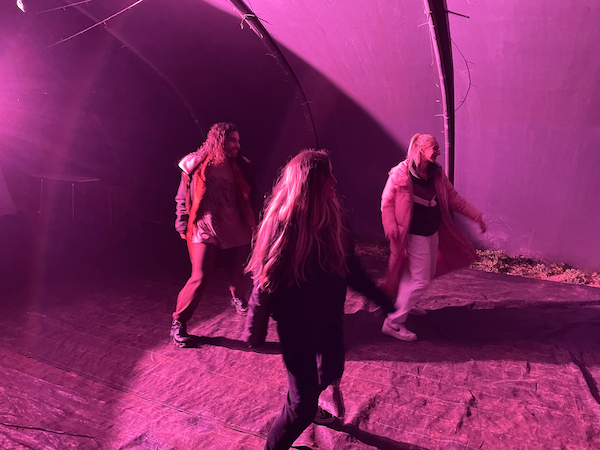 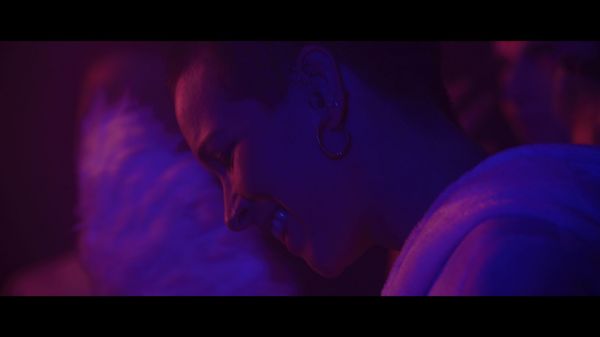 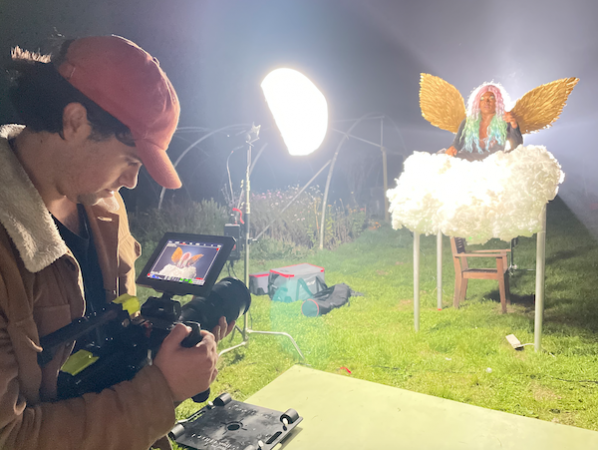 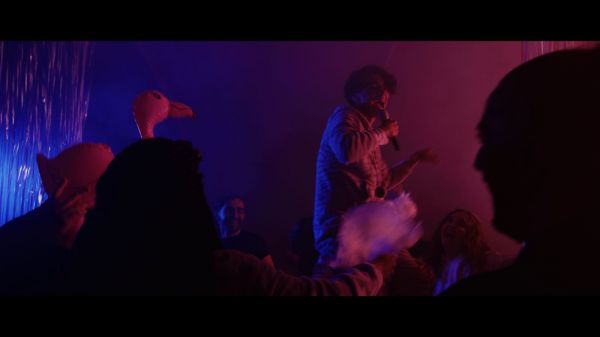