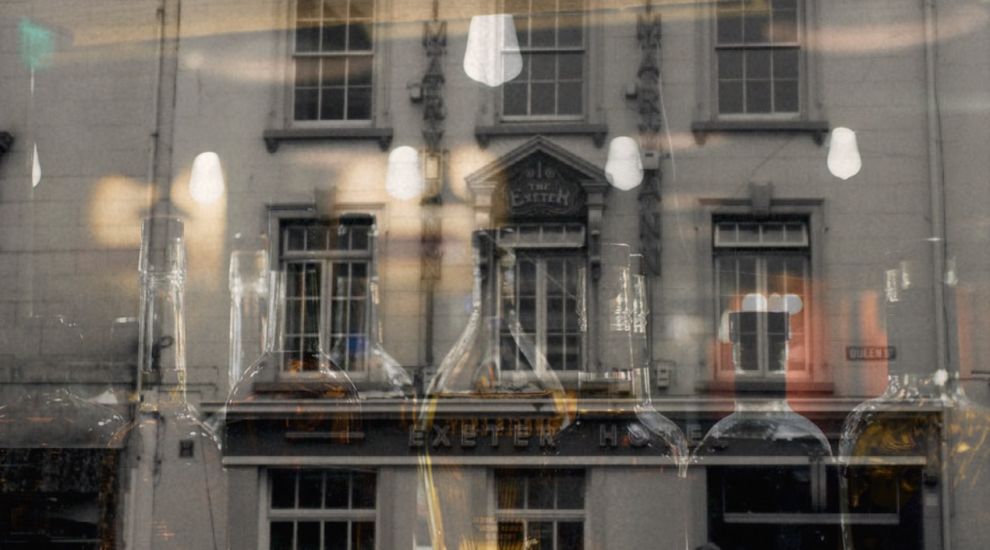 Having run as a public house for at least 190 years, it’s no surprise that 22 Queen Street – the Up and Down Café and Bar, formerly known as the Exeter Inn – has many tales to tell.

During the Occupation, Hilda Le Cocq held the licence for the Inn and her registration card shows that she was living at the property with her husband, Reginald, who was listed as the Hotel Manager, and her son, Kevin.

Before the Le Cocq family took over the management of the Inn, the Picot family were the licence holders. In the 1911 census, Samuel Picot is named as living at 22, Queen Street and described as a 45-year-old licensed victualler.

In 1900, Mr Picot’s licence renewal came before the licensing bench when Centenier C S Renouf stated that he objected to the application after the Constable of St. Helier received an anonymous letter complaining about the way in which Mr Picot conducted his tavern. 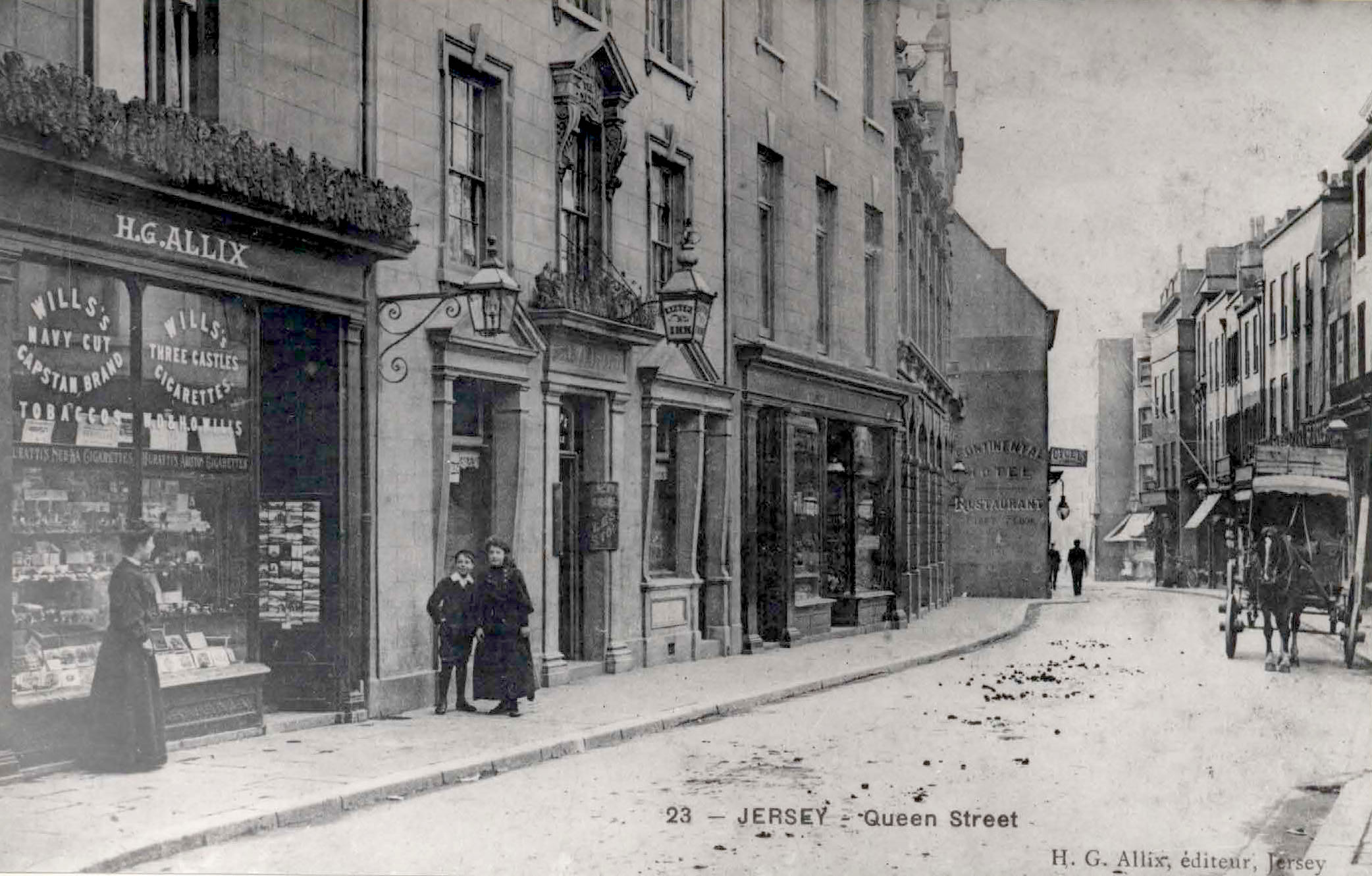 Advocate Nicolle replied that no official complaints had been made against Mr Picot and that he had a letter from Mr Picot’s next-door neighbour who declared that “he had never seen persons leaving the house after hours, except workmen who were effecting alterations on the premises”.

In summing up, the President of the licensing bench said that the Assembly could not take any notice of statements made by the Constable and granted the application.

In 1891, 54-year-old Henry J Boyce was the licence holder at the Exeter. Maria Little, aged 24, was the barmaid at the Inn and was also living at the property. Three years later, in July 1894, Henry and Maria married in St. Helier’s Church.

Just a few months later, the Exeter Inn and the Boyces were central to a libel case brought by the Attorney General against Philip Mourant de la Mare, part owner of the Jersey Times and British Press newspaper.

On Friday, 26 October that year, the Jersey Times and British Press had published an anonymous article criticising the paid police force of St. Helier and using a recent case involving the Exeter Inn as an example of their “manifest defects”.

The paper said that at around 03:00 or 04:00 on a Wednesday night, Mrs Boyce was awakened at the property by hearing noises downstairs. She woke her husband, who went downstairs to investigate and found a man wandering around in his kitchen with a box of matches. The paper reported that the untimely visitor was found to be “none less than PC Machon”. 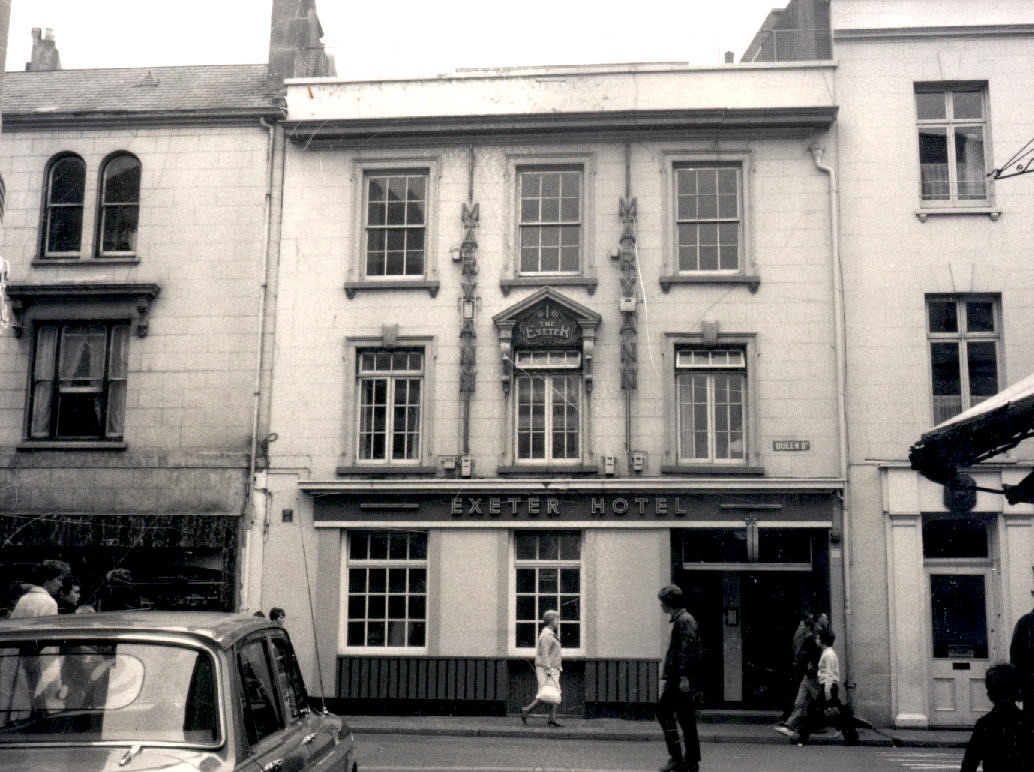 On questioning PC Machon, Mr Boyce found that he had got into the property through the top half of his bar window, which gave direct access to Queen Street. Boyce said that PC Machon was not in uniform and “seemed confused”. PC Charles Coutanche was standing outside the window keeping guard.

The officers explained that they had seen the shutters open and thought it their duty to inform the Boyces. They said they had tried to knock at the door but when they had no reply, PC Machon decided to climb through the window. Mr Boyce let the policer officer out through the door and went back to bed.

The paper reported that the following morning Mr Boyce was “astonished to perceive that six bottles of valuable liquor had disappeared”. The Jersey Times and British Press highlighted a second case where a hotel had been entered at night, again by PC Machon.

Mr de la Mare pleaded not guilty to libel charges in the Royal Court and the case was committed for trial at the next Assizes. The case was heard on 7 January 1895 and called on a number of witnesses to examine the truth behind the libel accusations.

In summing up the case, the Bailiff said that the jury had to decide on a case that was “far from easy….. if Mr de la Mare was found innocent, and the jury decided that there was no libel in what he had published, then Machon and Coutanche should themselves be at the bar where he (Mr de la Mare) now found himself”.

He referred to Advocate Durell’s speech, which defended de la Mare, saying: “Advocate Durell had truly said that the press should be permitted to exercise free liberty. But while the press had its privileges, is also had its responsibilities and liberty should not degenerate into license.”

Mr de la Mare was eventually found innocent of libel and discharged by the court. On 11 January, just after the case was heard, PC Machon was dismissed from the Police Force and PC Charles Coutanche suspended while the Attorney General decided whether a prosecution should be instituted with regards to the Exeter Inn incident.

Pictured: An extract from the 1895 court case. (Jersey Heritage)

Mr Boyce had purchased the Exeter Inn in March 1871 from Gilbert Rowe, who had bought the property just a few years earlier from Sarah Hutchings, wife of Charles Henry Mann.

Both Sarah and Charles were born in England and are recorded as running the Exeter Inn in 1861 and 1851. The couple married in Jersey in 1843 and in the marriage register, Mrs Hutchings place of birth is listed as Exeter. It seems sensible to assume that this is where the Exeter Inn got its name.

Prior to her ownership, 22, Queen Street still appears to have been run as an inn, with Vincent Albites, Manufacturer of Liqueurs, insuring his stock and utensils in trade in his dwelling house there on 27 September 1833.

This article, put together by Director of Archives and Collections Linda Romeril, touches on just some of the many stories about Queen Street. To find out more, sign up for Linda's free online talk at 19:30 on Wednesday (22 September) HERE.

The talk is part of Jersey Archive's ‘What’s Your Town’s Story?’ series and you can catch up on previous talks HERE.

Posted by Keith Marsh on Jun 16th, 2022
Love these short but interesting articles, Thank You.
To place a comment please login Login »