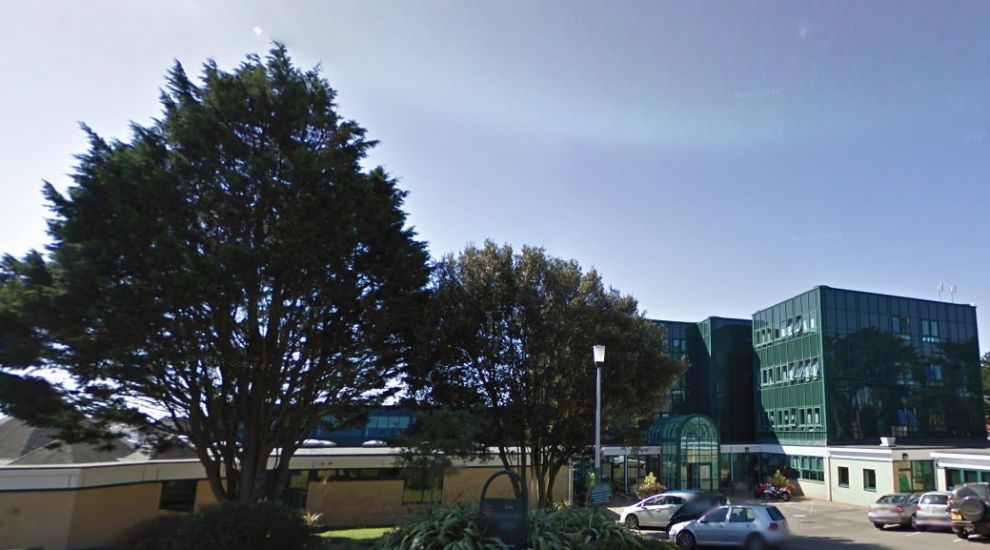 Work to turn the former Les Quennevais School into a temporary hospital will start this summer before planners have approved its full conversion.

Enabling works to strip the building of asbestos, fix broken doors and windows, repair leaks in the roof and divert a mains water pipe will begin soon after the planning application has been submitted, which is expected to be imminently.

However, the construction team behind the Our Hospital project, which includes building the temporary hospital at Les Quennevais as well as the main campus at Overdale, say these early works are necessary for health and safety, as well as as maintenance reasons, and have been approved by Planning.

It means that residents living around the former school will soon see workmen on site and scaffolding being erected.

Pictured: The flagged triangle of grass could partly make way for parking to allow buses to access the new temporary hospital.

Addressing a meeting of residents at Communicare last week, Gary Maguire, who is overseeing the building’s conversion for main contractor Rok FCC JV, said: “In order to make the scheme efficient and effective from a timeline point of view, and to support the overall project, we are going to carry out some enabling works.

“These will happen before the planning application has been determined because they are mainly health and safety or maintenance issues.

“For example, there is asbestos in the building. We would all agree that it’s a good thing to remove asbestos from any building, and this gives us the opportunity to do that in a safe and controlled manner.

“We know that people are breaking into the school, wandering around and doing things they shouldn’t be doing, and that is a danger to those people. So, as a society, we need to get the asbestos out of that building. That is a good thing, I believe.

“The regulation and control of asbestos is among the most onerous in the construction industry, in public health terms, so it will be very heavily scrutinised to make sure we do it safely.

“Also, some of the windows and external doors are in a bad state of repair, with locks, hinges and panes of glass that need repairing or changed.”

Mr Maguire added that scaffolding would be built up to some of the roofs to provide access to them. A handrail would then be erected around the perimeter of the roofs, allowing contractors to inspect them and repair any damaged sections to make sure the building is watertight.

A water main, which is damaged and needs upgrading, would also be diverted and a high-voltage electricity supply will be ordered from the JEC, he said.

A perimeter fence around the site will also be erected.

“It is important to say that no construction work will take place before the planning application is submitted,” added Mr Maguire.

“We have tested [the enabling works] with the Planning Committee and they have confirmed to us that it is all suitable and within the conditions of the planning rules.

“The main works will then start in January, once we hopefully have planning permission, and we look to complete next September, when we will engage with the clinical team to discuss when teams currently at Overdale will start to move in.”

The meeting also heard that, when the temporary hospital is open, the 12A bus will divert from Route Orange up Clos des Sables to the former school and back.

In order for buses to travel up and down Clos des Sables, parking on that particular street will be prohibited during the five-years that the hospital will be there.

A pinch point has been identified near a row of six houses to the east of the Clos des Sables road, whose residents have to park in the street as access to the front of their properties is blocked by a triangle of grass.

One proposed solution is to pave over part of this triangle, to allow these residents to park in front of their homes. Possibly requiring the relocation of a tree, this has yet to be finalised by the parish and planners on the project.

30 spaces at the Les Quennevais Sports Centre will be allocated to hospital staff parking during the day, while in the evening, it is hoped that residents will be able to park in the former library to the south-west of the school car park.

Mr Maguire told the meeting that the 'decant' project was currently on budget.

Posted by Scott Mills on Jul 29th, 2021
erm has or is anyone going to ask if it'll get a fire certificate, or will it be given well after it opens it's doors (siimilar to our wonderfullly expensive nightgale hospital). Lovely beaches close by though
Posted by Paul Troalic on Jul 29th, 2021
They are just trundling on aren't they seemingly oblivious to all the normal regulations that you and I have to adhere to.
You have to laugh at the audacity of this government and the project Team.
It is clear to most people that that don't give a snot about what we, the public, think or say. Farnham has signed his own death warrant. As Politician he is finished in my opinion. I have never considered him very good snd he has shown his naivety on his handling of Overdale.
He may think he is getting away with it but memories are long in Jersey.
The immigration population may not give a damn but we, the real Islanders do care and when they are long gone we will still be here picking up the pieces, and the debts of this infamously stupid government.
Posted by John Sheen on Jul 30th, 2021
Sorry Paul, are you suggesting you need planning permission to remove asbestos or fix a leaking window? Your comment clearly demonstrates your lack of understanding of such projects.
And what an offensive comment to make regarding the ‘immigration population’. Imagine they all upped and left, as you predict. There would be no one to work in the supermarkets, hotels, healthcare, finance industry, care homes etc. They most certainly ‘give a damn’, especially those in our healthcare workforce, who struggle on in a 1970’s hospital caring for and looking after all islanders.
The majority of people don’t care where the hospital goes, they just want it built as quickly as pods before we lose any more of our health workforce due to the conditions they have to work in.
To place a comment please login Login »