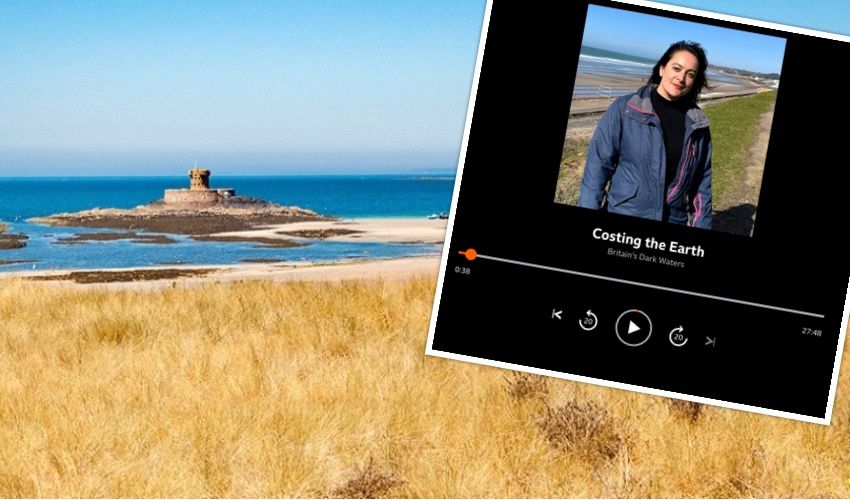 Contamination of Jersey’s water supplies by a toxic chemical has received national prominence this week.

The polluting of groundwater, boreholes and reservoirs with PFAS – a chemical that was an ingredient of firefighting foam sprayed at the Airport – features in the latest edition of ‘Costing the Earth’ – BBC Radio 4’s flagship environment programme.

Entitled ‘Britain’s Dark Waters’ – a reference to a Hollywood film based on a real-life story about PFAS contamination in America – the programme broadcasts from St. Ouen’s Bay and features interviews with islanders campaigning for more action to remove the chemical for water and for greater acknowledgment of its impact on health.

A BBC team visited the island last month to research and record the parts of the programme. The Government refused an invitation to be interviewed.

Recorded in St. Ouen’s Bay and with the sound of breaking waves in the background, reporter Leana Hosea begins the half-hour programme: “The waves are gently breaking along this idyllic stretch of beach on the Channel Island of Jersey.

“Blue skies, powdery white sands: you can see why it is a popular holiday destination. But I am here because under the surface there is a darker story to be told: a toxic chemical has contaminated the ground water in this entire bay. It’s called PFAS, the umbrella name for thousands of man-made chemicals.

“In this week’s ‘Costing the Earth’, I am finding out what happened here in Jersey and asking if it could be going on in the UK elsewhere.”

The programme features interviews with St. Ouen’s Bay residents Sarah Simon and Jeremy Snowdon, who have both campaigned for more government action.

There is positive recognition, however, that the Government has commissioned and funded a blood-testing programme for islanders who have lived and/or worked in known areas of contamination.

Reflecting on the programme, Miss Simon said: “I am happy that these types of broadcasts help people understand the extent that forever chemicals are in our environment resulting in a massive detriment to human health.

“Awareness of how damaging PFAS are is key to reducing their production, cleaning up our environment and protecting future generations.”

The programme, which is on BBC Sounds, can be listened to here.