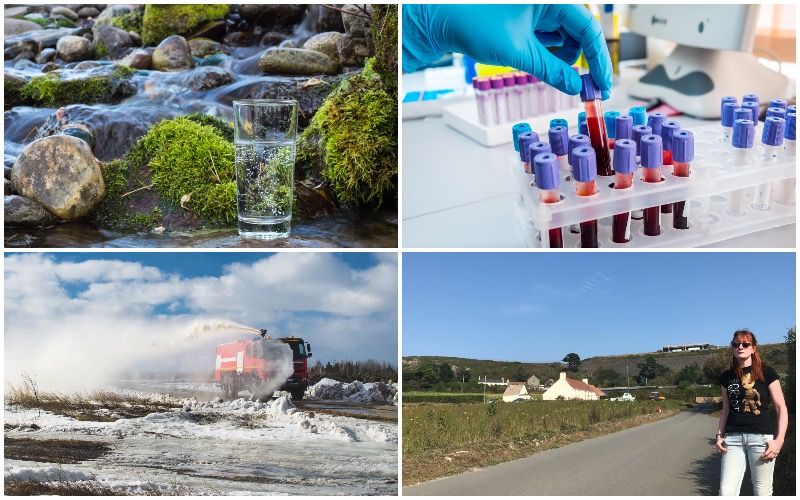 A detailed study of St. Ouen’s Bay and the Pont Marquet area of St. Brelade will soon begin to assess the impact of a man-made chemical that has been linked to cancer and liver disease.

It is hoped that the ‘hydrogeological’ study will increase understanding about the impact of ‘PFAS’ in Jersey – which has been found to varying degrees around the whole island but particularly to the west and south of the Airport runway.

This is because a primary source of PFAS contamination in the island was a brand of firefighting foam used at the Airport until the early 1990s, which contained a now-banned substance called PFOS, which is part of the PFAS family of carbon-based chemicals.

PFOS was particularly effective at suppressing fuel-based fires but subsequent studies have linked it to adverse health effects in humans, including cancer, liver damage, immunity problems and birth defects.

The PFAS family, with its tight chain of carbon atoms, also does not break down easily, leading it to be branded a ‘forever chemical’.

Pictured: A Government map of the “plume area” in St. Ouen’s Bay which is contaminated by PFOS.

High levels have been found in a large area of St. Ouen’s Bay and also in streams around Pont Marquet, which flow in to St. Aubin’s Bay.

Residents living in these areas, particularly those close to the runway, believe that PFAS is responsible for illnesses they have experienced.

One of them, Sarah Simon, has called for the Government to commission an independent committee of inquiry to determine the impact of PFAS contamination on islanders’ health.

The Government is unable to claim costs from the manufacturer of the firefighting foam, 3M, having signed a deal with them in 2004, in exchange for £2.6m, which went towards cleaning up the contaminated Airport training ground and building a new rig on the site.

St. Ouen’s Bay and Pont Marquet are two important catchment areas for Jersey Water, who are currently unable to fully access the boreholes and streams there because of the contamination.

This, the company says, threatens the long-term sustainability of water supplies in the island.

The Government has former a ‘technical group’ to assess the level of PFAS contamination and money has been allocated to fund its work.

As well as the hydrogeological study, whose need has been identified in two previous reports by the group, it has also been decided to fund a new round of testing of private boreholes.

In a recent ministerial decision, Environment Minister John Young said: “Several of the recommendations [of the technical group] relate to undertaking a hydrogeological survey of the St. Ouen’s Bay and Pont Marquet catchments.

“Government Plan funding has been secured and the appointment of consultants to undertake the work is being progressed. Phase 1 of the survey will likely involve further sampling of streams and groundwater from boreholes and wells.

Pictured: Sarah Simon, who lives in St. Ouen’s Bay under the western end of the Airport runway, is campaigning for an independent committee of inquiry into PFAS.

“Further recommendations include establishing a procedure whereby private households or landlords are able to test their private water supplies.

“Due to the technical sampling procedures this needs to be done by experienced officers.

“Due to the need for data by the Government as part of the general understanding and the hydrogeological survey mentioned above, I consider it practical to sample private water supplies and to fund or part-fund the analysis costs.

“This will be for households or landlords whose properties are connected to private water supplies - boreholes and wells - to supply drinking water.”

Households will have to apply for testing, which will then be approved by the technical group.

All 16 chemicals in the PFAS family will be tested for in the St. Ouen’s Bay and Pont Marquet catchments for free.

Those outside of those catchments will be tested for two types – PFOS and PFOA – for free, however, households can request the full suite of 16 tests. If they do, they will have to pay the difference in cost, which has not yet been published.

The Government say that, before making an application, households or landlords should telephone the Environmental Department on 441600 to see if previous sampling covers the area and so further testing is not needed.