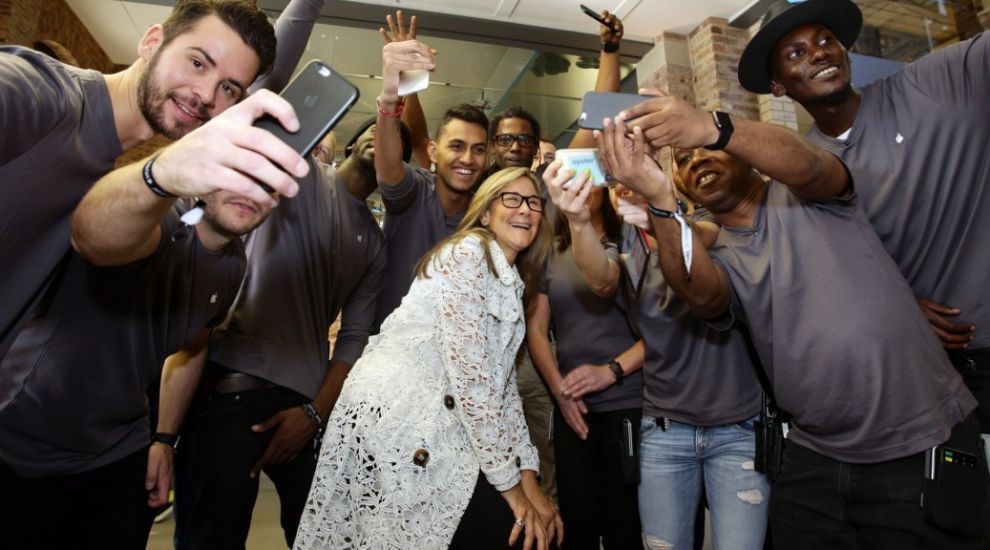 The most senior woman at Apple says the firm’s “culture” is the reason hundreds of people queue for new devices on the day they launch.

Angela Ahrendts, Apple’s senior vice president of retail and online stores, said the company was different to anything else she had seen in the industry, having previously been chief executive of Burberry, before leaving to join the technology giant in 2014.

“I always say this isn’t retail. No retailer in the world would spend as much as we do on servicing and training,” she said during a surprise visit to the Apple Store in Covent Garden as the firm launched its latest iPhone – the 6s – for the first time.

“The team has just been telling me there’s been four workshops a day here to teach staff, and that’s the fun part – it’s an experience. You can be curious forever, you can continue to learn and I think that’s what makes Apple so different.”

Ahrendts also spoke about the fever Apple product launches have a history of creating, as once again hundreds queued outside overnight in order to be among the first to buy the latest smartphone. The first person in line had been camping outside the store since Monday night.

Though criticised in some quarters for being cult-like in its fandom, Ahrendts said the “energy” the launches created was undeniable.

“You know it’s funny because at Apple there’s such a positive energy every day in the stores, but launch day it’s amplified about 100-fold.

“I think just having customers so excited about the new products, and the teams are so energised – they’ve been working, learning and training for the last couple of months and when all of that just comes together – this is what the stores were born to do.”

Ahrendts also lifted the lid on some of the possible changes to Apple’s retail stores that are currently being trialled. A new store in Brussels features a new layout, as well as trees placed inside the building.

“We are starting to test some new concepts in some of the new stores. I haven’t spoken publicly at all about it because these are pilots and these are tests.

“We’re just piloting some things, and I think the overarching thing is I think you can expect the stores to become hopefully a little calmer, but yet a little more dynamic, and maybe slightly more aligned to the same feeling you get when you go into our products. Because maybe the store is really just a giant product.”

Since joining the iPhone maker, Ahrendts has overseen a change in how some Apple products are sold; most notably altering the launch of the Apple Watch so that few were sold in stores on day one, cutting queues and instead pushing customers online.

The traditional crowds have returned, however, with this latest iPhone launch.

When asked why she thinks this happens with Apple product launches, Ahrendts said the famous Apple “culture” was a key factor.

“I think above and beyond anything else, Apple’s whole vision has always been to enrich people’s lives with the products that we make,” she said.

“I think that our people also feel a very strong responsibility to touch and to enrich people’s lives, and it’s those two together I think that make people trust Apple and feel very comfortable and want to be a part of this. We’re not just selling products, we’re changing people’s lives forever.”