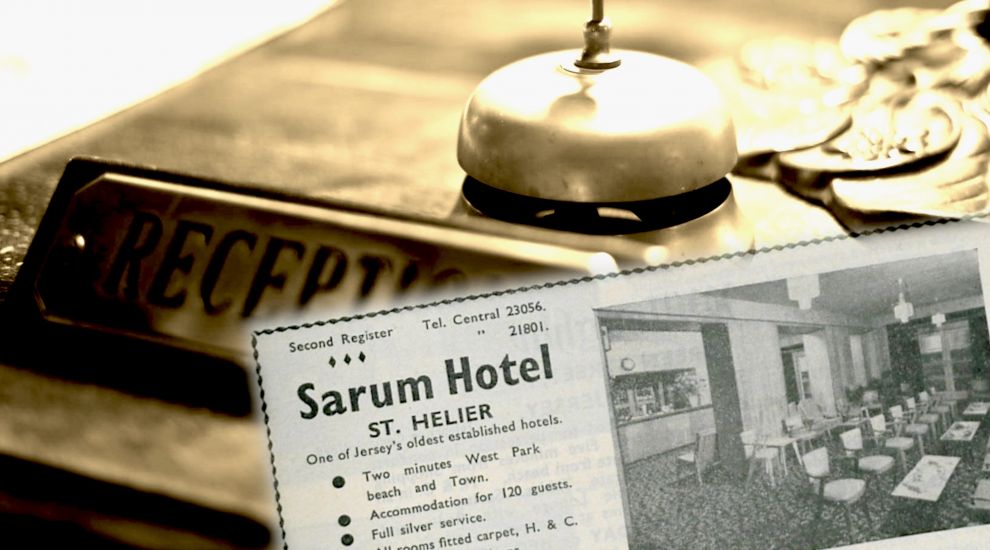 There are, and have been, a number of hotels in the Old and New St. John’s area. One of these, the Sarum Hotel, has been a fixture on New St. John’s Road for almost a century.

For the first edition of Jersey Archive’s ‘What’s your town’s story?’ series this year, Senior Archivist Stuart Nicolle delved into its history…

Sarum Hotel Limited bought the property from Florrie Emily Soloman, widow of Francis Bert Spencer, in 1970. Florrie and her husband had themselves bought the Hotel from Edward Boxwin Arthur in 1960.

Arthur was the owner of the Sarum Hotel during the Occupation but before this troubling time began, he is quoted in newspaper articles about the prospects of the summer season for tourists in Jersey. 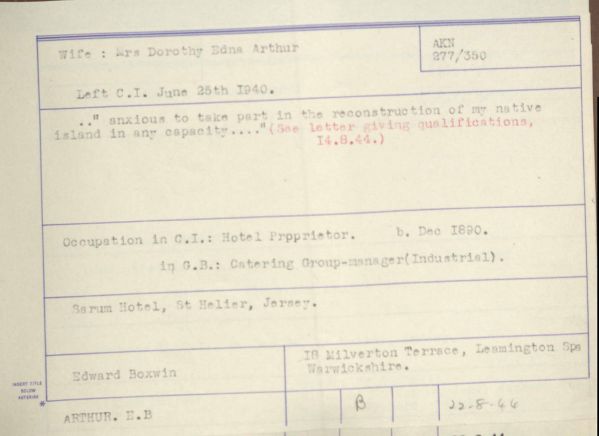 CLICK TO ENLARGE: Edward Boxwin Arthur's application to return to the island after WWII. (Jersey Heritage)

At that time, the hotel was the local headquarters of the Workers’ Travel Association, which was a group that had been set up in the UK in 1921 by the Trade Unions and the Co-operative Movement to offer organised, affordable overseas travel to working class people.

In March 1940, Arthur told the Evening Post that the Workers’ Travel Association had informed him that a specially chartered plane was due to arrive in Jersey with a full complement of visitors for the Easter holidays and that bookings, both by boat and plane, were coming on very satisfactorily. Numerous enquiries were also being received at the Association’s offices and it was hoped that a regular air charter could be established.

They weren’t to know that a few short months later, the Occupation was to begin. 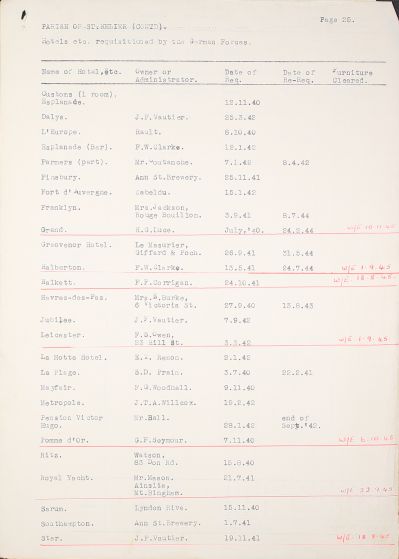 CLICK TO ENLARGE: A list of hotels - including The Sarum - requisitioned by the Germans during the Occupation. (Jersey Heritage)

As it was, Arthur made the decision to evacuate from the Island with his wife, Dorothy Edna. On his application to return to the Island in 1944 it was noted that he was “anxious to take part in the reconstruction of my native island in any capacity”.

Having been vacated, Sarum Hotel was requisitioned by the Germans in November 1940. Requisition orders relating to the hotel show that of items were taken from and transferred to the property so that the occupying soldiers could use them.

The Evening Post reported that Arthur returned to the Island on the mailboat on 24 July 1945 and he began to put appeals in the newspaper asking that silver-plated articles marked Sarum be returned to the hotel.

Arthur had bought Sarum House from George Eason Stolworthy in 1933. He then went on to expand the business by buying Septah House next door in 1937 from Henry Edmund White and Valencia Cottage from George Edward Grant in the same year. 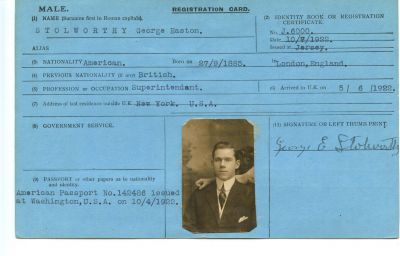 He was born in London on 27 September 1885 and his wife was born in St. Peter but there are Aliens Registration cards for both of them in the Archive. It seems that he left England from Liverpool in October 1905 on the ship Columbia and was naturalised as an American Citizen on 20 June 1914 in the Southern District of New York.

The couple applied for a US Passport in January 1919 in order to travel back to the UK. The reason on the application form was noted that Alice’s father and brother had died and her mother was unwell.

After their trip to Jersey, they returned to America and appear on the 1920 census in New Jersey. They applied for a passport once again in 1922, by which time George was listed as a Superintendent, in order to visit their parents for a few months. 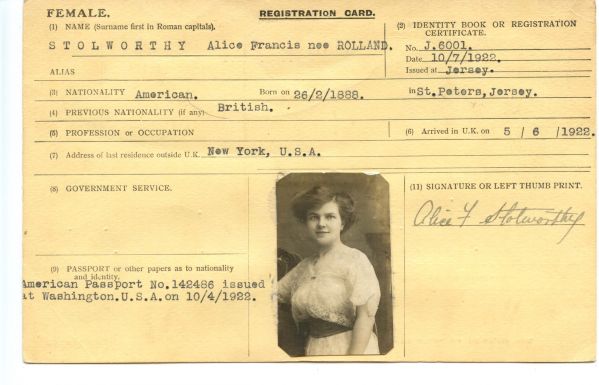 CLICK TO ENLARGE: Alien Card of Alice Stolworthy, who bought Sarum House with her husband, George, in 1925. (Jersey Heritage)

Evidently their plans changed during their time in the island and they decided to stay. Their Aliens Registration cards note that they moved to 21, New St. John’s Road in March 1925 and then they bought the property from William Charles Jones and Augustine Nouguier, his wife, on 2 May of that year. It’s noted in the contract that the property was also known previously as 3, York Place.

Stolworthy died during the Occupation in January 1942 at The Limes. His obituary said he was 57 years old and that he was a former proprietor of the Sarum Hotel. It went on to say that he had sold the hotel to Edward Arthur a number of years previously after the death of his wife. He maintained a connection to the business as a guide and sports manager and was very popular with the visitors.

Pictured: An advert for The Sarum Hotel in a 1960s tourism brochure. (Jersey Heritage)

The three properties – 17, 19 and 21, New St. John’s Road – that were later amalgamated together as the Sarum Hotel started out as a terrace of houses together under the name 1-3, York Place. On 9 June 1855, George Le Gros gave one of the properties to each of his daughters.

It's not entirely clear when the houses were originally built but they appear on the Le Gros Map of 1834 and 3, York Place is mentioned as being occupied by a surgeon, John Paddock, in a Fire Insurance Register dated 1831.

Jersey’s Heritage’s new series of ‘What’s Your Town’s Story?’ (WYTS) monthly talks begins this weekend with a look at the history of Old and New St. John’s Road.

The series follows on from last year’s popular WYTS programme, which focused on tales about the centre of St. Helier.

Having barely scratched the surface of the stories available, the Jersey Archive team who research the talks are now looking at areas on the outskirts of Town.

Book your place for the talk by calling 833300 or emailing archives@jerseyheritage.org. The Archive will also be open from 09:00 until 13:00 for general research.