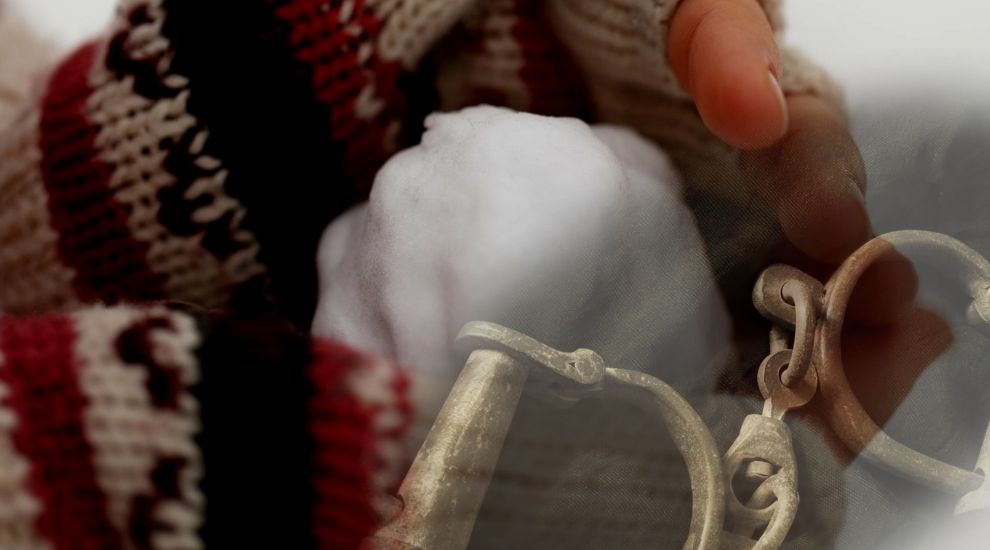 The festive misdemeanours of a teen who picked a snowball fight with the wrong crowd, and a man carrying three birds who kicked a hole in a hat, landed them before the Magistrate's Court at Christmas.

Throughout 2021, the team at Jersey Archive have been telling stories about different areas of St. Helier for the ‘What’s your town's story?’ series of talks.

It seems only fitting that the final talk of the year, which takes place on Wednesday, has a suitably festive theme – ‘Christmas Stories in St Helier’.

As a taster for what’s to come, what better place to start than with some snow balls being thrown?

While it is unusual for Jersey to celebrate a White Christmas, islanders did enjoy some snow for the big day in 1869. Onslow Clarke, who was aged about 16, took full advantage of the situation but managed to get himself into trouble at the same time. 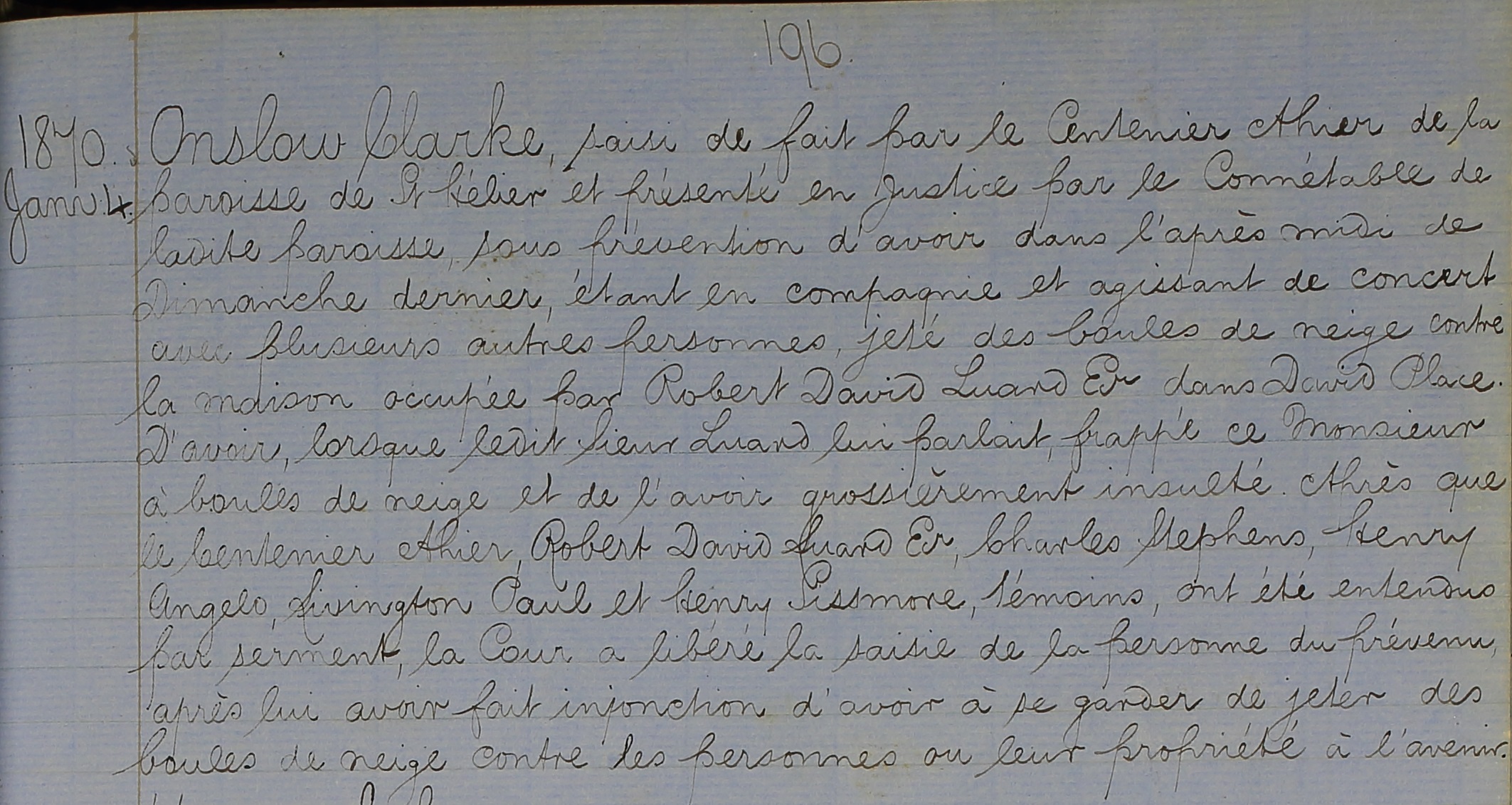 CLICK TO ENLARGE: Onslow Clarke was brought before the Magistrates Court after going on a snowball spree.

On Boxing Day, he was arrested for throwing snowballs at a house in David Place. Evidently, he picked the wrong residence for target practice, as the house belonged to a gentleman called Robert Luard, who used to work in the Indian Civil Service.

Mr Luard took exception to Onslow’s language and told him that if Onslow didn’t stop and hit his windows, he would come right down and shoot him!

It seems that Onslow didn’t pay heed and was also accused of pelting two soldiers with snowballs at Fort Regent. The unfortunate men were on guard duty and so were unable to fight back.

Onslow was brought in front of the Magistrate’s Court on 4 January 1870. He was released without charge but warned to refrain from throwing snowballs at people or their property in the future. 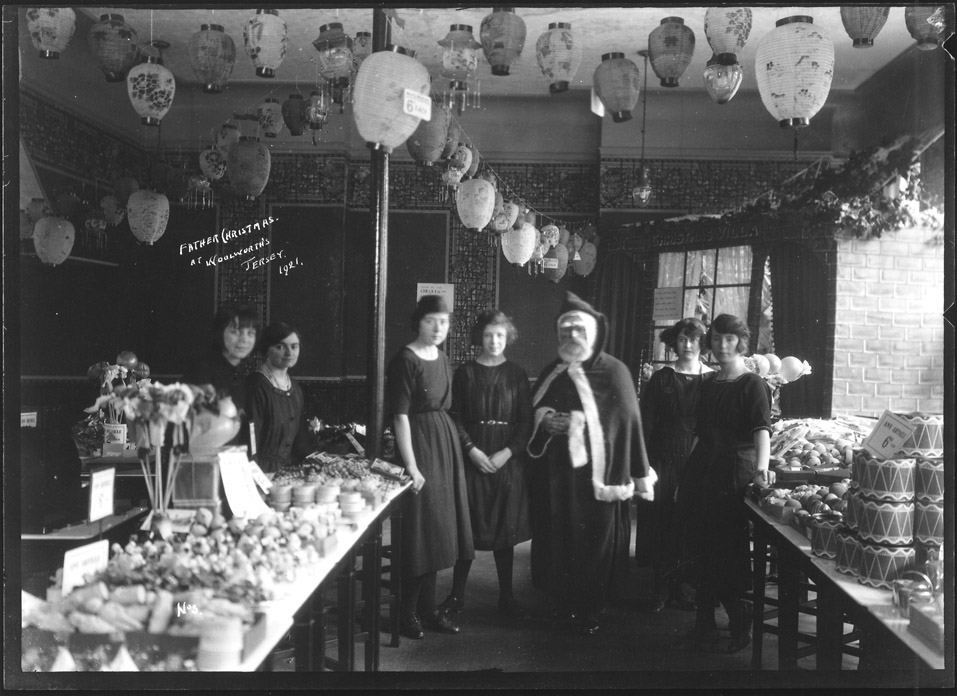 The Court records tell other stories of Christmas-time shenanigans, many involving drink.

On Tuesday, 27 December 1881, Kate Ryan, who was described as “an old offender”, wandered into the police station in a state of intoxication.

She was obviously looking for somewhere to stay on a cold night as she asked PC Noel, who was on duty, for a night’s lodging. She was turned away but was later arrested and the next day brought before the Court.

Thinking he was teaching her a lesson, the Magistrate gave her a sentence of eight days in prison, to which she replied: ‘Thank you sir’. The Court erupted into laughter and she was led off to prison.

Oswald Puckridge was another familiar name in the Magistrate’s Court in the 1880s. He appeared once more on 1 January 1885 having committed an assault on Philip Journeaux in Springfield Road. He had only been freed from prison the previous Monday.

CLICK TO ENLARGE: Oswald Puckridge got into a scrap the night before New Year's Eve shortly after being released from prison.

A newspaper reported that between 09:00 and 10:00 on 30 December, Puckridge approached Journeaux and asked him to go for a drink with him at a public house. When Journeaux refused, Puckridge grabbed Journeaux into an embrace, knocking off his hat and kicking a hole in it. The accused claimed that all he had asked Journeaux to do was help him move some furniture from his house.

Bizarrely, at the time of the incident Puckridge was accompanied by a tame sheep on a lead. He also carried a bag containing a turkey, a goose and a duck. He claimed that he was planning to send the turkey to the Magistrate, Mr Gibaut, who was prosecuting him; the goose to Centenier Seymour, who had arrested him; and the duck to somebody else as Christmas presents.

Despite laughter from the crowd, the Magistrate didn’t see the funny side of it and told Puckridge that his troublesome behaviour needed to come to a halt. He ordered him to give bail of £10 for his future good conduct and to pay Journeaux 5 shillings, the value of his hat, in default of which he would face two weeks’ imprisonment. 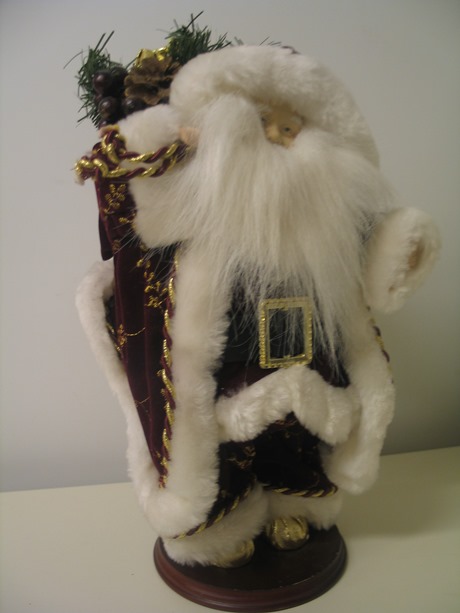 Pictured: A musical Father Christmas from circa. 1900. (Jersey Heritage)

Christmas entertainment was something of a tradition in St Helier and in 1908, the Cinemata-Vaudeville was opened at St Thomas’ Hall, New Street. The programme was generally a mix of live acts and moving pictures.

The Boxing Day show from that year included a variety of films, including one called ‘The Juggling Maniac’, as well as comedienne and singer Winnie Morris and local female impersonator Jack Soper.

Christmas 1925 saw the annual visit of Santa to the children at the General Hospital in Gloucester Street. This particular year, Santa had gone modern and set off from Browne’s store in Hilgrove Street in a motor car. He arrived on 17 December in great style.

When the big hospital gates were flung open for him, they drove through and he and his helpers were escorted by the nursing staff to deliver presents to delighted children on the wards. 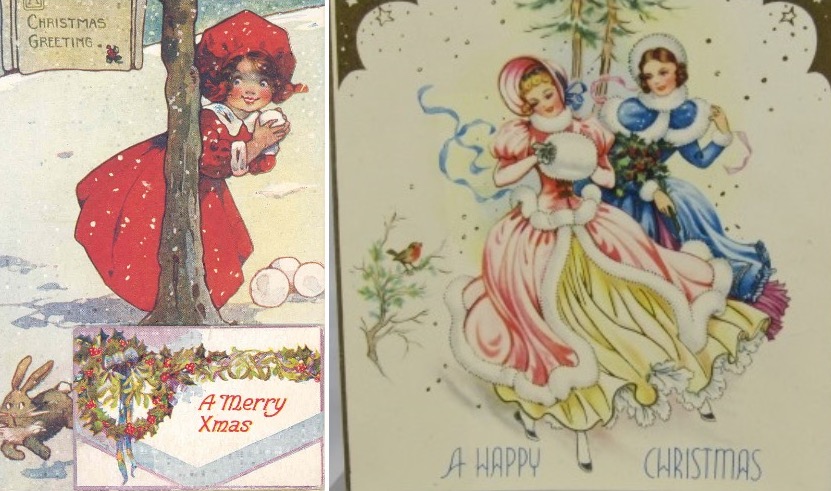 On 17 December 1888, residents of St Helier were treated to a show of Christmas lights that nobody was expecting. At 10.25pm, a rare event occurred. A lunar rainbow, or moonbow as they are known, appeared in the sky.

It was reported to be in a perfect half ellipsis with bright colours. This phenomenon is said to occur when the moon is full or almost full and on the day referred to, the moon would indeed have been full.

This article, put together by Archivist Trude Foster, touches on just some of the stories of Christmas time in St. Helier.

If you would like to find out more, join Jersey Archive for a free online talk at 19:30 on Wednesday 22 December, as part of the ‘What’s Your Town’s Story?’ series.

To register for ‘Christmas Stories in St. Helier’, click HERE.

You can also catch up with previous talks in the series by clicking HERE.

A hotel and civil strife in King Street