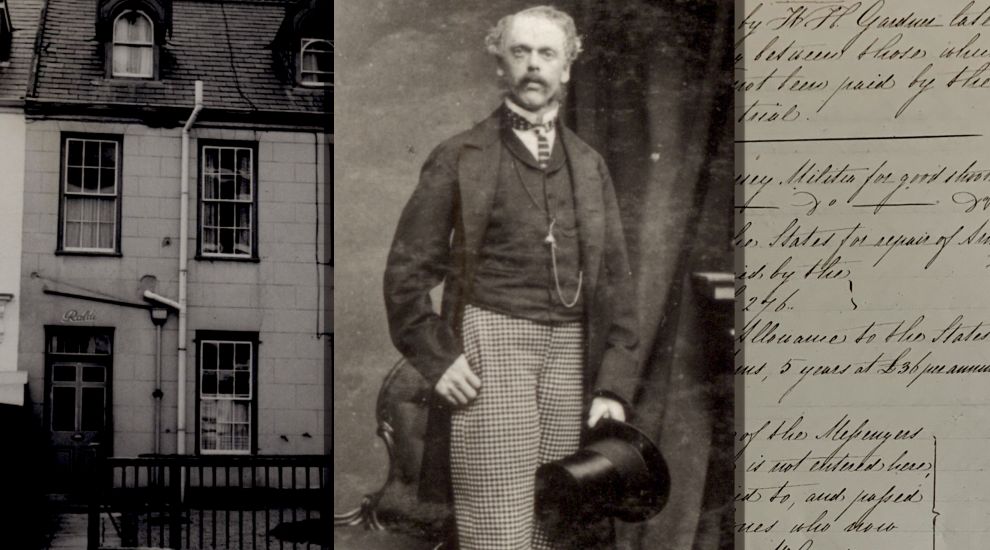 How did a man described as being of "superior abilities" go from holding the prestigious position of secretary to the Lieutenant Governor, to being an inmate at one of the most infamous prisons in England?

Jersey Archive's Harry Le Feuvre reveals all for the latest in the 'What's your town's story?' series, which this month focuses on Ann Street...

For lots of people, Ann Street in St. Helier is associated with beer and the former well-known brewery that was located there.

However, for much of the 19th century, it was where you would have found the office of the Secretary to the Lieutenant Governor. 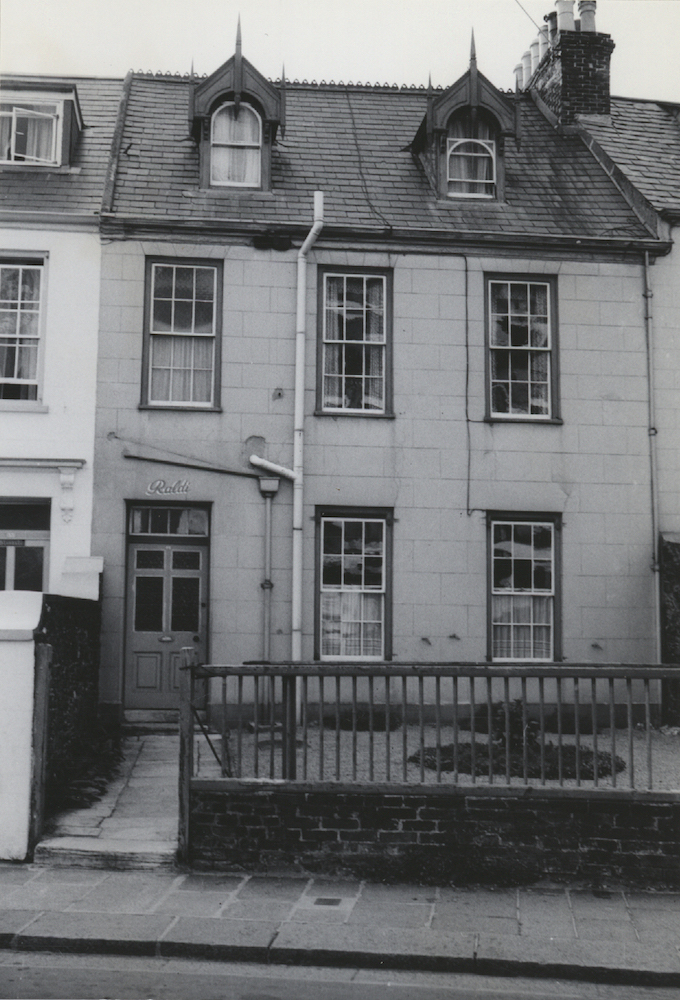 Records show that when Ann Gardner died at the Governor’s Office in 1861, her husband, John, had been Secretary to the Lieutenant Governor and had lived on Ann Street ‘for many years’.

The Gardners lived at 35, Ann Street and in Coghlan’s 1843 Hand-Book to the Channel Islands, the building is referred to as ‘Governor’s Office, Ann Street’, and was where passports were issued ‘to persons going to France’.

At the time of his own death in 1863, John (82) had already passed on his duties to his son, William Henry Gardner.

On the 1861 Census, John is listed as retired, and William, living at 8, Elizabeth Place, is named ‘Government Secretary’. 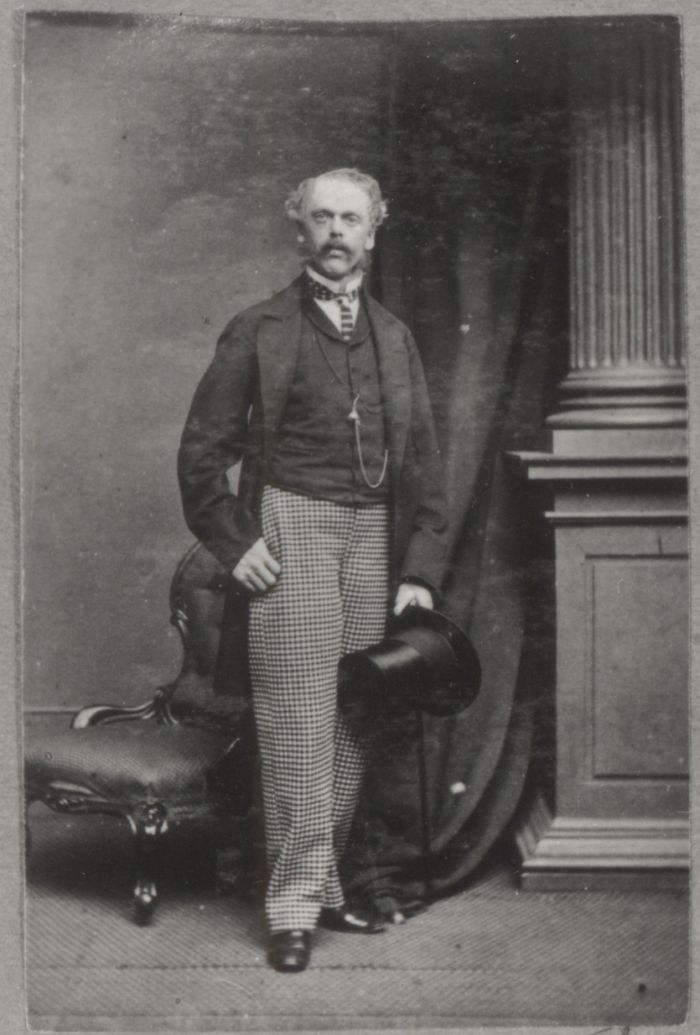 However, 10 years later, life had taken a different turn for William.

Rather than being in the employ of His Excellency and living at the Governor’s Office on Ann Street, he had found himself at Her Majesty’s pleasure as an inmate at Dartmoor Convict Prison.

In September 1867, an irregularity was spotted in the Jersey Militia accounts. The annual prize money given by the UK government to the best marksmen had not been distributed. In fact, irregularities in the prize accounts appeared to go back to 1863. 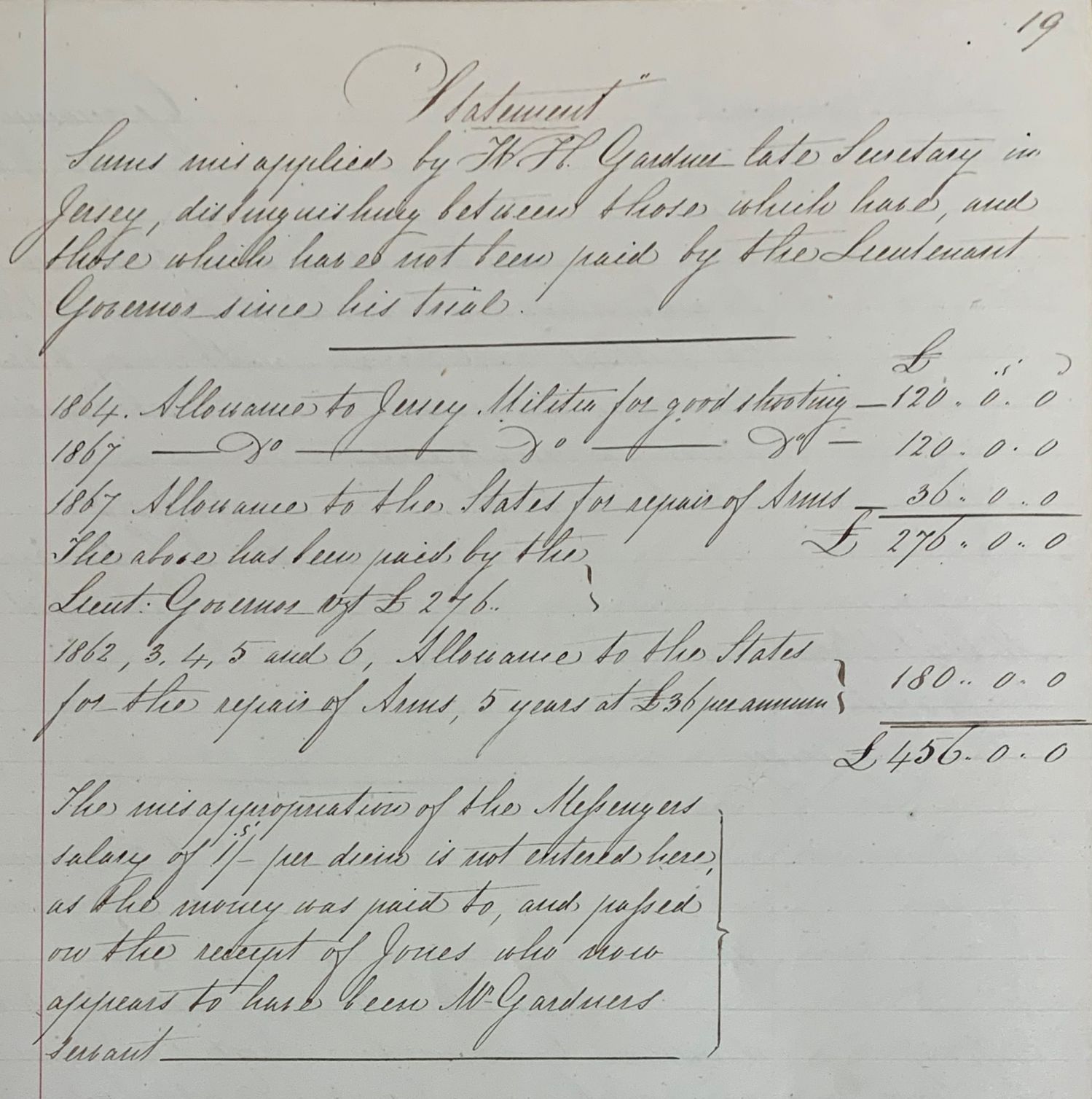 When the Lieutenant Governor, Major General Burke Cuppage, put this to Gardner, he affirmed that he had distributed the monies. As secretary, Gardner held considerable responsibility, and is described as the ‘Government Accountant, the Adjutant General, and Pay Master, and entire manager of all the Appointments, Clothing, Ammunition and Material of the whole Island Militia’. Cuppage ordered an investigation into the ‘mysterious affair’. 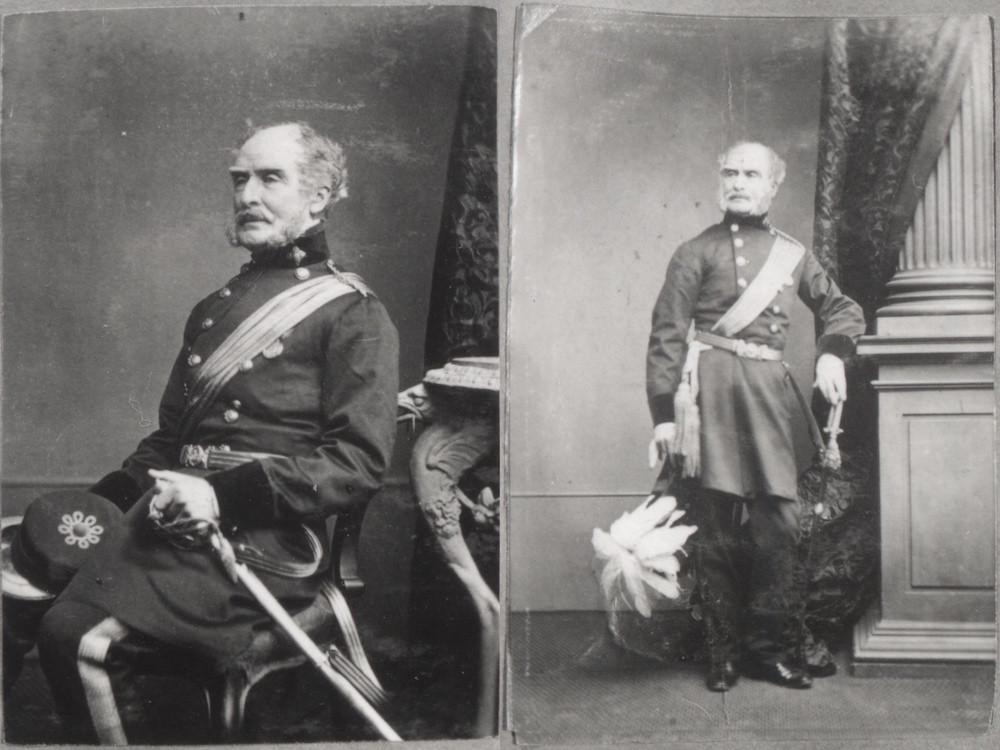 On 14 October 1867, William was charged with embezzlement and mutilation of books, and sent to prison to await trial. The investigation revealed a number of irregularities; books had been altered and amounts changed, pages torn out and signatures forged. It also transpired that William was heavily indebted to his brother-in-law and the subject of bankruptcy proceedings.

It became clear that shortly after Cuppage took office in 1863, William began embezzling money. In addition to the prize money for the best marksmen, a portion of the annual grant given by the UK government intended for the repair of the arms of the militia from 1862 to 1867 was also missing. In total, £456 was estimated to have been stolen. 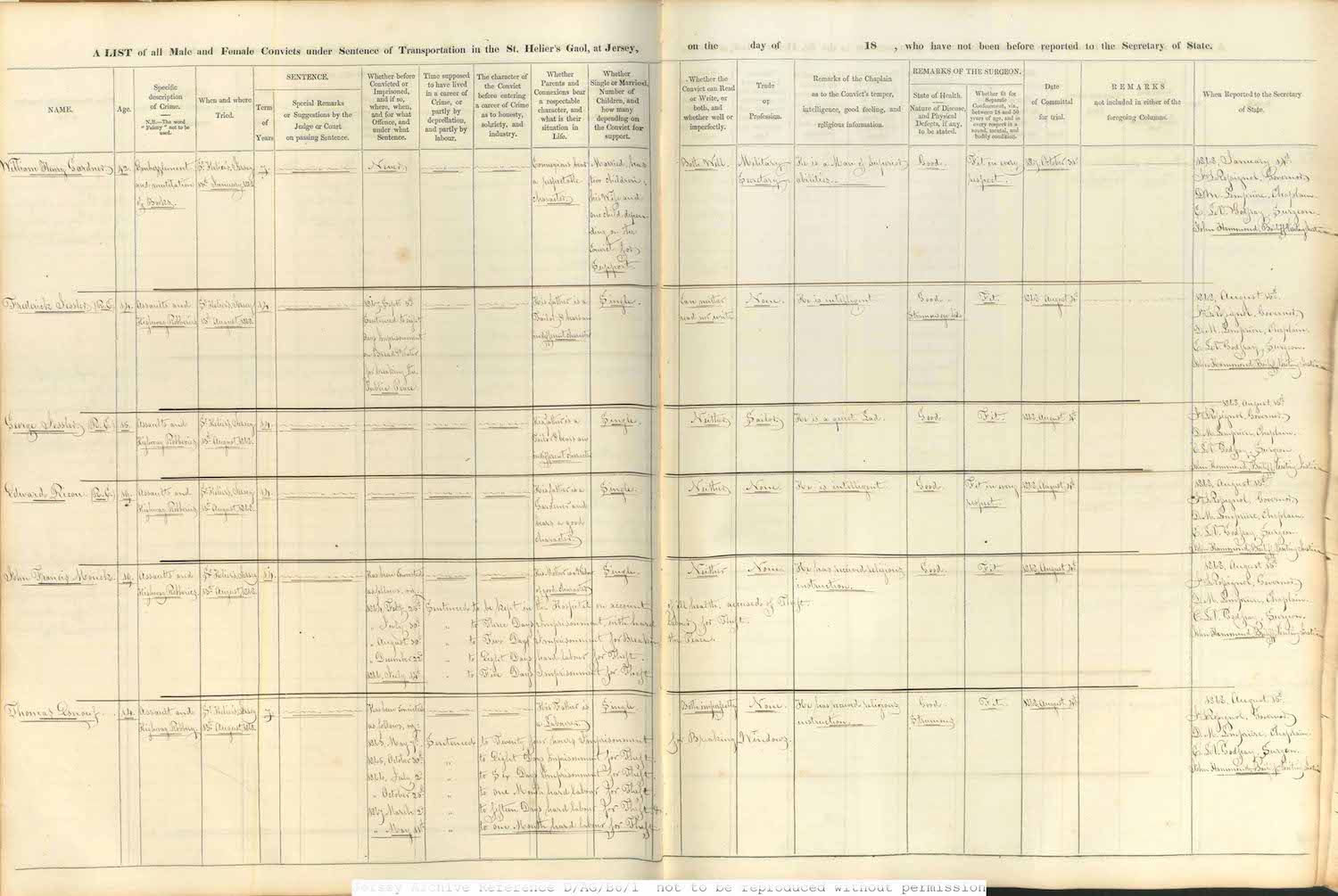 Pictured: Transportation register showing W H Gardner (top) described as a "man of superior abilities" and being deported for seven years for "embezzlement and mutliation of books" (Jersey Heritage).

William was tried before the Royal Court in January 1868, and after four days, was found guilty of all charges against him. The Court sentenced him to seven years’ transportation, and he was sent to Dartmoor to serve his sentence. In August 1969, the Home Office informed the Lieutenant Governor of the decision to commute Gardner’s sentence to four years.

Despite the scandal, the Gardner family continued to serve within the Lieutenant Governor’s Office. Lieutenant Colonel J F Murray was appointed ‘Government Secretary’ following William’s suspension in October 1867, but William’s brother, Edward, was living at 35, Ann Street in 1871 and 1881, listed as ‘Principal Clerk’ of the Government Office in 1871, and as ‘Lieutenant Governor’s Clerk’ ten years later. 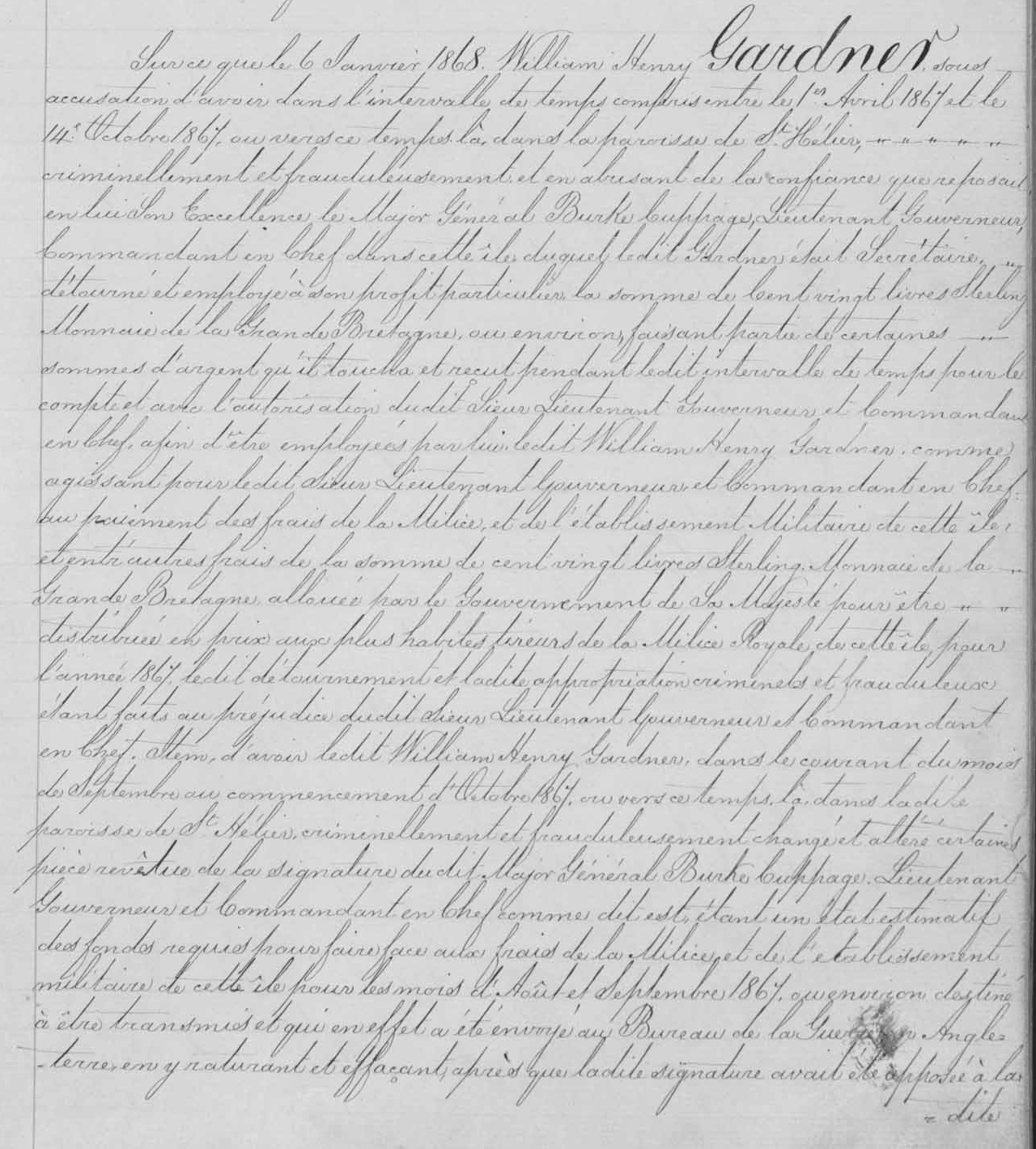 This article, put together by Trainee Archivist Harry Le Feuvre touches on just one of the stories of Ann Street and forms part of Jersey Heritage’s ‘What’s Your Town Story?’ series.