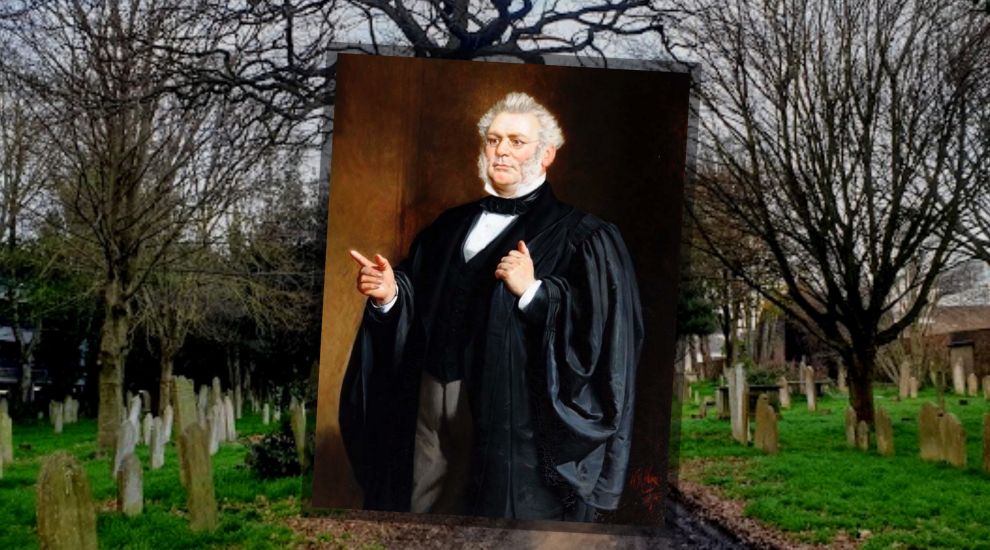 Numerous people have been laid to rest at the cemetery behind Green Street car park... However, the story behind it became anything but peaceful when a new Seigneur demanded payment for the land.

Le Clos de la Colomberie, the land on which the Cemetery was to be built, was purchased by the Parish of St Helier on 18 March 1826.

The sellers were the daughters of the late Thomas Lemprière. The cost of the land was £748. The parish set about laying out the cemetery and mapping space for about 1,000 plots.

The cemetery was well-established by the 1850s, at which time a court case was brought against the Parish relating to the land. The cemetery is situated in the Fief de la Fosse. At the time of the purchase of the land in 1826, Mr Hammond was the Seigneur. When he died, his son, James John Hammond, took over his title.

There was a mechanism for Seigneurs to claim an indemnity from organisations when a piece of land was held in perpetuity by the Parish or the Church. At no time did either Mr Hammond claim this money. However, in 1837, Francois Godfray, a leading Advocate and politician, purchased the Fief de la Fosse from Hammond for 60 quartiers of wheat rente and £500, roughly equivalent to £1,500 when added together. 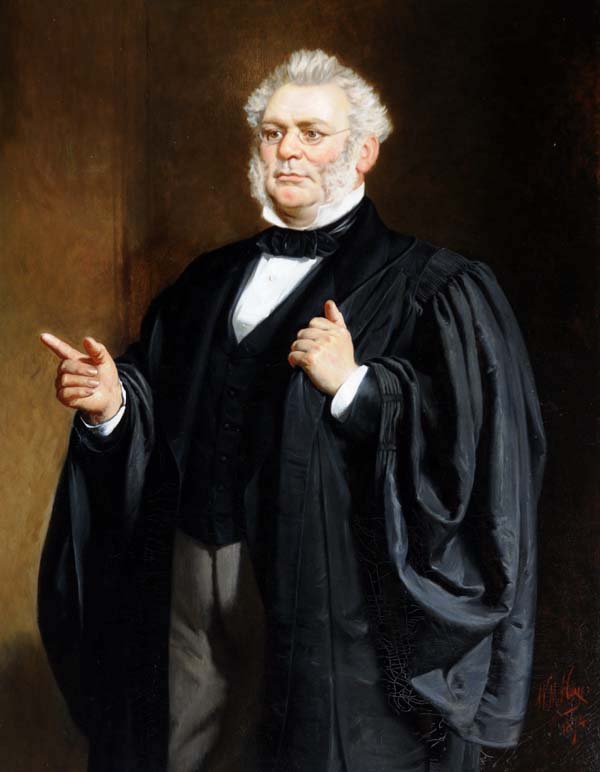 Pictured: A portrait of Francois Godfray portrait from 1874. (Jersey Heritage)

Soon afterwards, he claimed £1,700 from the British Government after the death of William IV, without heirs, saying that he had a Seigneurial right to enjoy Fort Regent for “a year and a day” as it fell within the Fief de la Fosse. The Government paid this fee without hesitation, an act that the Jersey Independent and Daily Telegraph claimed fueled his appetite for claiming money from Great Britain.

A number of years later, after the death of Pierre Le Sueur, the former Constable of St Helier and leading Advocate, Godfray started making his move against the Parish of St Helier.

He claimed that he was owed money because Green Street Cemetery had been sold in perpetuity and as the Seigneur, he was entitled to a payment for this. Both the local media and the parish were outraged at this claim.

His case was initially heard by the Royal Court in 1855. The Jurats concluded that the Parish was liable to pay him 2% of the amount paid for the field. The Parish was, however, granted permission to appeal this verdict.

In April 1858, the Jersey Independent wrote that Godfray had been complaining about attacks but that it was he making an assault upon society and what he was receiving was well-deserved.

They went on to say that the previous Seigneurs had made no claim against the Parish authorities, “but the Hammonds are gentlemen, not mere bleeders and suckers-with an appetite like the horse-leech ever crying “Give, give!”.” 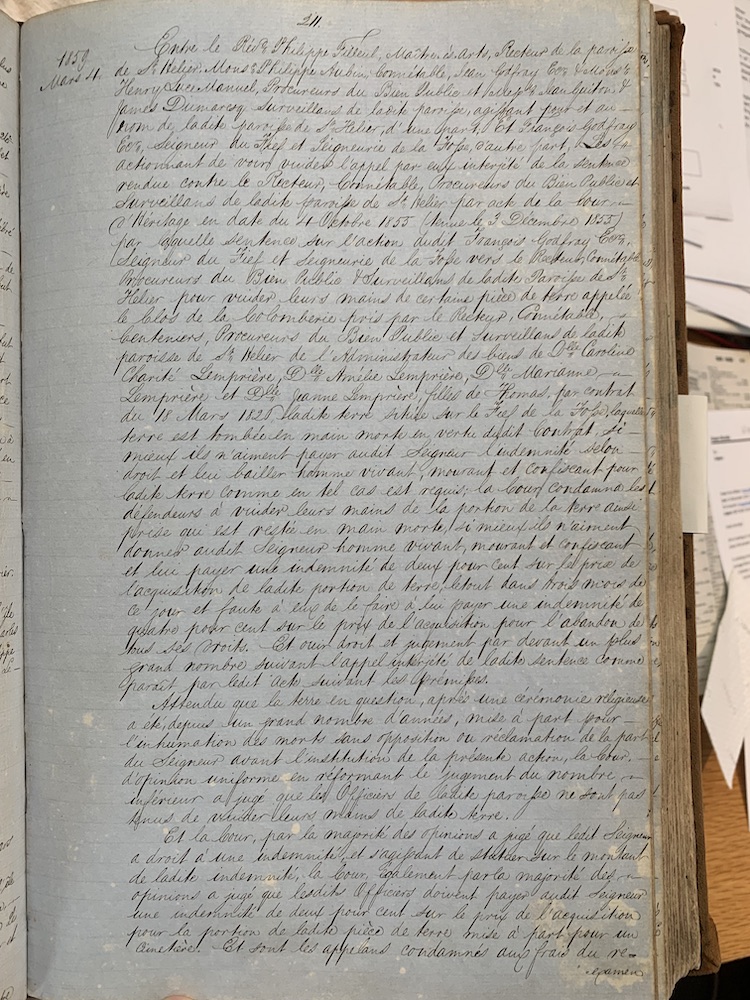 Pictured: Royal Court Appeal in March 1859 in which they agreed that the Parish should pay 2% to Godfray. (Jersey Heritage)

The Parish’s appeal was heard in 1859 with judgement being reached on 4 March. Seven Jurats heard the case and the Court came to a split decision, with four believing the Seigneur was entitled to an indemnity and three thinking that he wasn’t. They backed the original decision of the Court setting the amount owed at 2% of the cost, although some were pushing for 4%. This amounted to £14, 19s in total, a small amount but obviously more expensive as a result of legal costs.

The media, Parish and public were all enraged by this decision. The Jersey Independent editorial from 9 March read: “The Royal Court would seem to be bent upon committing suicide.”

It went on to say: “The people of Jersey have well nigh ceased to feel surprise at anything the Jurats can do; but certainly Friday’s Judgement in the matter of Lord La Fosse versus the Parish of St Helier is of an astonishing character-astonishing in its audacious contempt for Justice and its impudent defiance of Public Opinion.”

The newspaper wrote: “Last Friday’s judgement shewed that there is no more regard for decency than there is for justice in that whited sepulcher which has so long and so loudly called for thorough reformation or utter extinction.”

One of Godfray’s arguments was that the ground had not been consecrated properly and as such was still subject to feudal obligation. The newspaper pointed out the irony of this argument considering his own parents were buried in the graveyard: “Judge then of the religion of this man, who has not scrupled to endeavor to disprove the “sanctity” of the earth where the remains of his own parents’ repose, for the chance of gaining £14 19s or say £15!”

The Parish of St Helier called a meeting to discuss the case and voted by a great margin to appeal the case to the Privy Council, despite the small sum involved. However, the following year, in March 1860, the Jersey Independent reported that no progress had been made in bringing the case and asked Parish authorities if they could clarify what was happening with it. 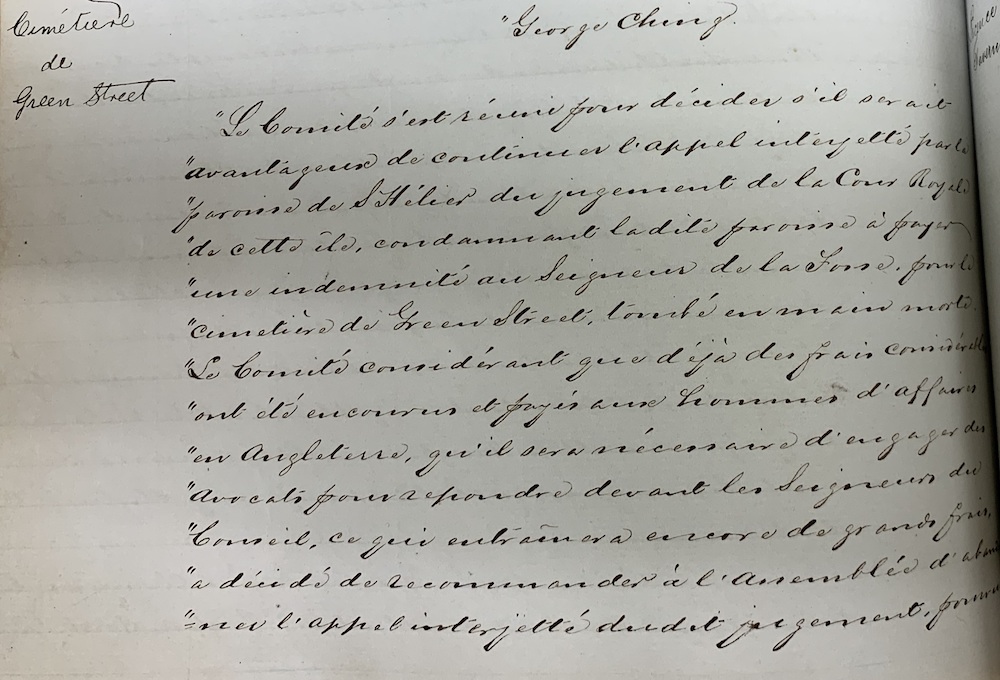 Pictured: Parish Meeting in 1864 to discuss whether to take the case to the Privy Council. (Jersey Heritage)

Finally, on 27 January 1864, a Parish Assembly was held at which the lawsuit was discussed. It was noted that since the original appeal, over £400 had been paid by the Parish towards lawyers’ fees.

This would increase if it were taken to appeal again. A Committee recommended that the case be abandoned and Godfray paid the amount.

George Ching said that when the Royal Court judgement was first heard, there was mass indignation against it. If they agreed with the Committee’s suggestion to forego the case, it “would be the greatest indignity that could ever have been offered to this parish. It would be a great humiliation and a dishonour to the members”.

Unfortunately, the majority of the Assembly did not agree with him and backed the Committee’s suggestion that the Privy Council appeal be dropped and that the Seigneur was paid his indemnity.

Ching declared that “this is a disgrace to the town!”.

This article, put together by Jersey Archive's Senior Archivist Stuart Nicolle touches on just one of the stories of Green Street and forms part of Jersey Heritage’s ‘What’s Your Town Story?’ series.

Islanders are also being asked to nominate homes to explore in next year's version of the series.

The corner of town favoured by doctors

The secrets of the private members' club