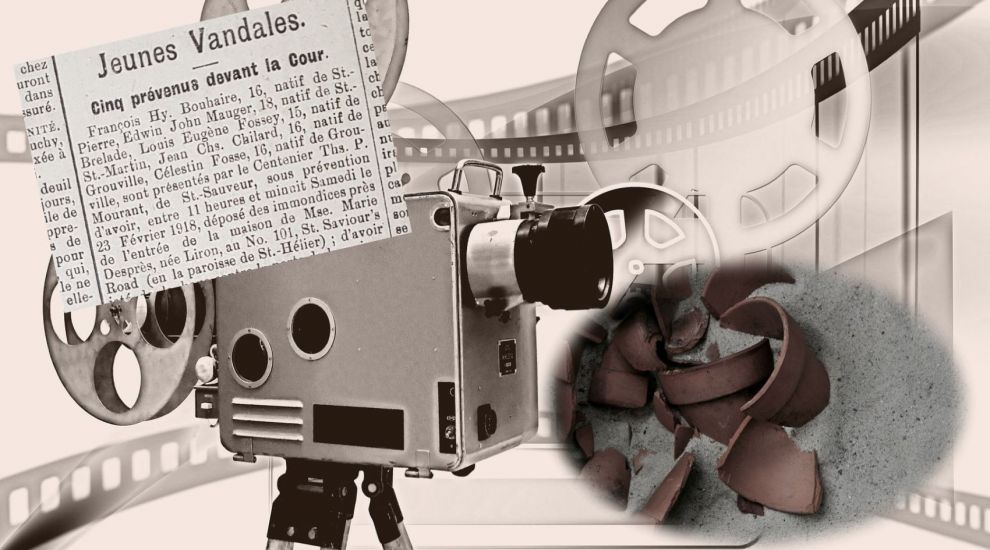 In March 1918, five young men went on a night-time rampage, leaving a trail of destruction behind them as they threw mud, damaged property and killed livestock.

According to documents from Jersey Heritage, one of their defence lawyers told court that sensational films on the big screen had influenced the boys, appealing to their spirit of adventure - an excuse that could quite possibly be seen in the court records of today, more than 100 years later.

The boys in question were François Henri Bouhaire, Edwin John Mauger, Louis Eugene Jean Fossey, Jean Charles Chilard and Celestin Louis Fosse. They were arrested after a night of destruction carried out between Saturday and Sunday, 23- 24 February. 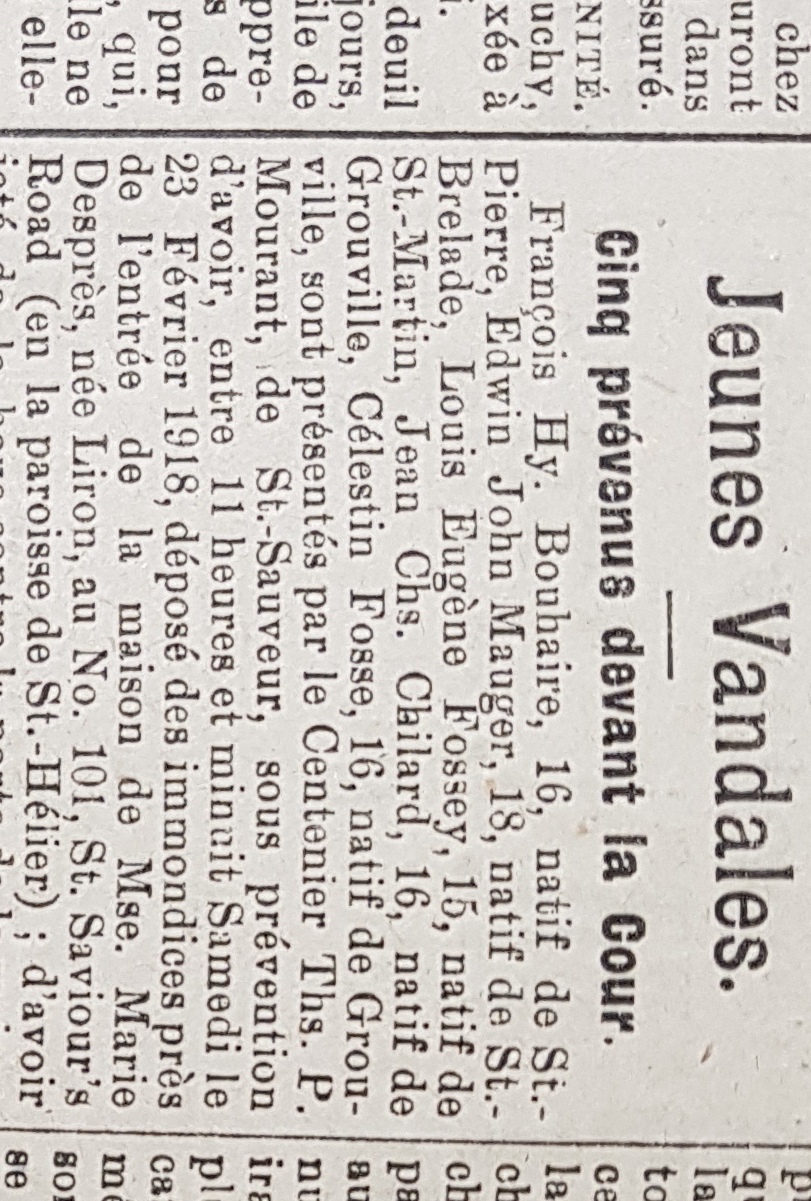 Aged between 15 and 18 years old, the boys were accused of a multitude of crimes that covered three pages of the Honorary Police Register for St Saviour and were recorded in detail.

It is likely that the group of young men had enjoyed an evening out in St. Helier as the story of their disruptive walk home started between 23:00 and midnight, when they committed “a nuisance” at the gate of the house of Marie Despres, of 101, St. Saviour’s Road.

They went on to throw mud at the house occupied by Walter Charles Le Boutillier and then moved up to the Five Oaks area, where they stole cider from Philip Gallichan, of Le Geyt Farm.

The young men continued on their way to La Hougue Bie, demolishing a wall along the Grande Route de St. Saviour, placing 15 wooden logs across the public road, breaking a small two-wheeled cart and throwing a skirt and shawl onto the road from the property of Jean Allo. 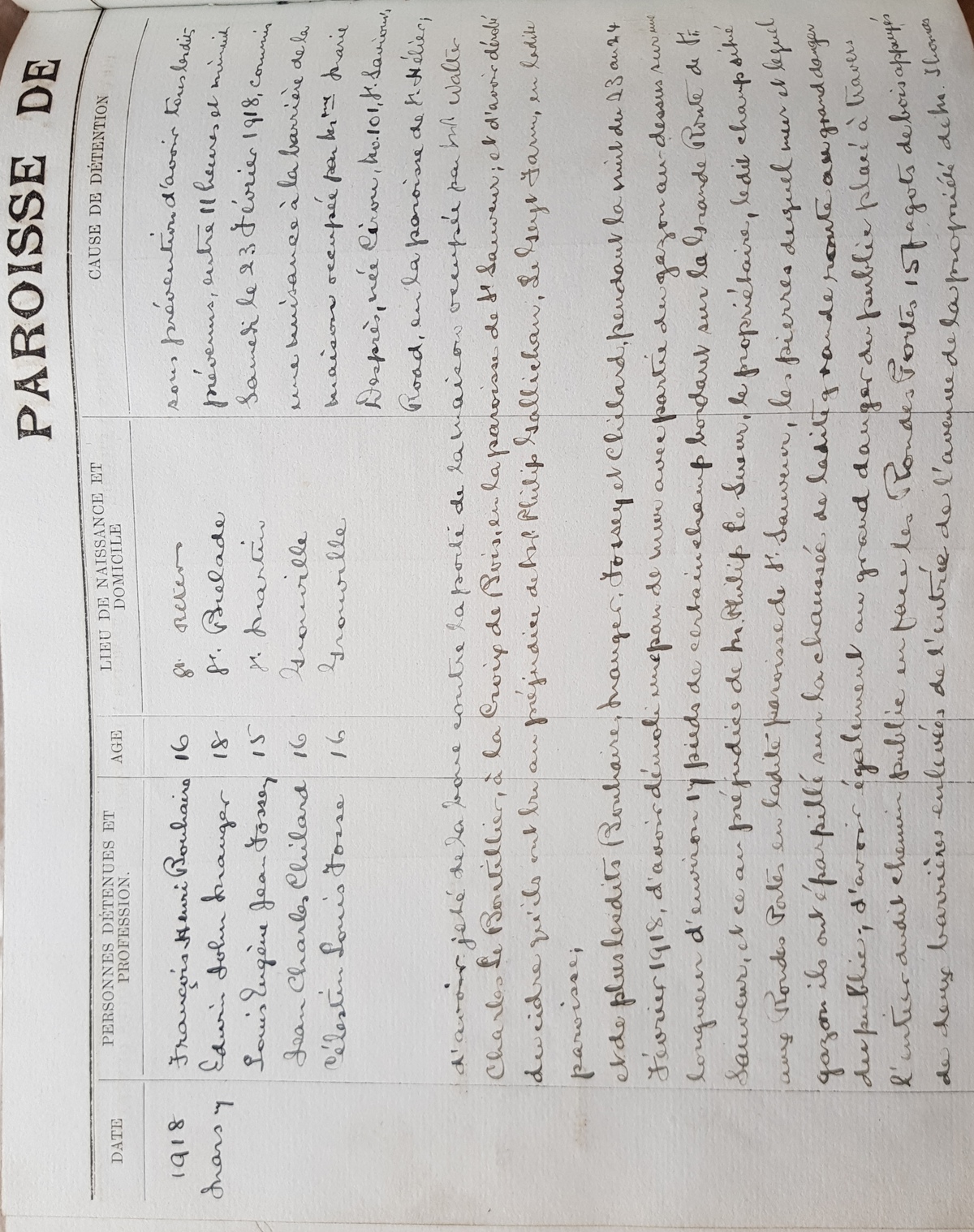 Pictured: "The boys were accused of a multitude of crimes that covered three pages of the Honorary Police Register for St Saviour and were recorded in detail."

At La Hougue Bie, they broke into a greenhouse belonging to Mrs Logan and broke a number of pots and flowers, demolishing the trellis on the property and throwing it into the road.

Carrying on towards Maufant, the boys broke seven young apple trees in the fields of Thomas Perchard and threw more wood into the road. Finally, at the property Le Mourin in St. Saviour, which was occupied by Alfred Thomas Starck, they killed four chickens and let out all the pigs.

The young men all appear in the prison register for 1918 under the offence of theft and wanton damage. Francois, Louis and Edwin are sentenced to one month’s hard labour, with Jean and Celestin given lesser sentences of a fine or two to four days in prison.

During the court case, Advocate Giffard, defending one of the boys, stated: "Unfortunately there are sensational films in the cinema, which can sometimes give kids completely foreign ideas taken from the film they saw on the screen, appealing to their spirit of adventure.”

While his mitigation for the crimes might be something we would hear in a court case today, his suggested punishment would not. According to court records, Advocate Giffard felt that “the best punishment to be inflicted would be a whack on the backside”.