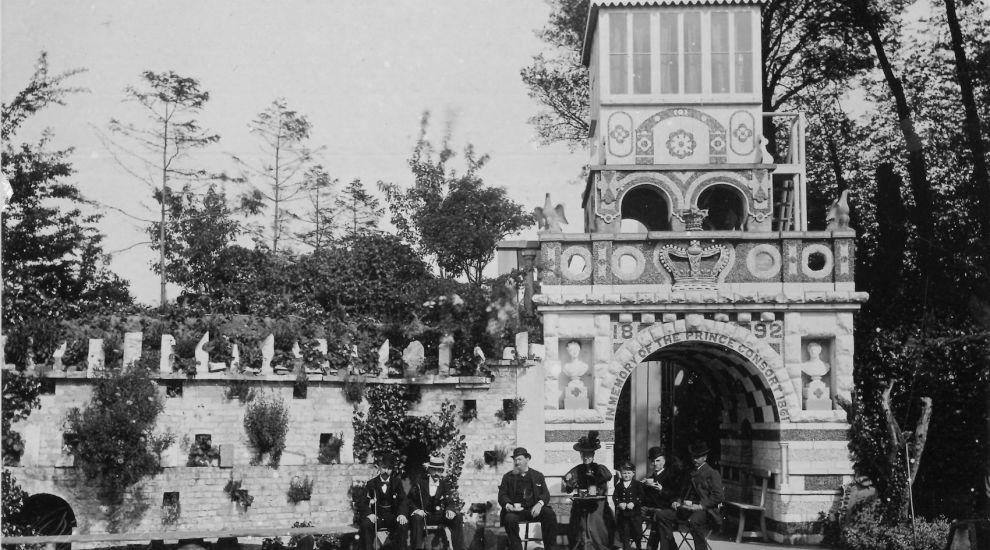 Tourists are attracted to Jersey for many reasons, including the island's sandy beaches and beautiful countryside - but 140 years ago, it was the ‘Troglodyte Caves’ of St. Saviour that drew in the crowds.

The Caves opened as a new attraction in the Five Oaks area on 23 September 1878 and were the idea of brickmaker John Champion.

He carved the Caves out of a disused clay quarry that he owned and they became a popular visitor site for a number of years for both tourists and locals alike.

The opening of Champion's Caves, or the 'Troglodyte Caves' as they came to be known, was marked by a grand gala with numerous dignitaries present, including the Lieutenant Governor, Sir William Sherbrooke Ramsey Norcott, who attended from the nearby Government House. 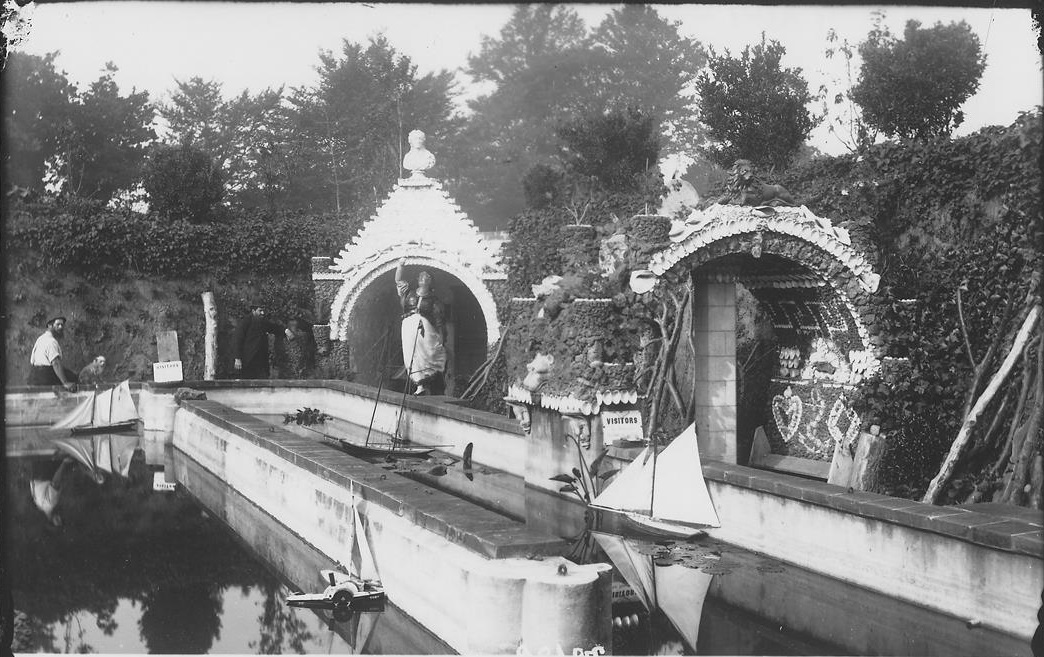 Pictured: The boating lake and the caves at Five Oaks, taken by Ernest Baudoux. (Société Jersiaise)

Professor Mortram was employed to give a grand display of fireworks, including shells, rockets and various devices and Mr McKee's band were in attendance to entertain the guests.

Newspaper reports later claimed that Champion had started constructing the attraction as early as Valentine's Day 1875, although there was no announcement of work taking place at the time. He lived next door to the site in Aylesbury House, so perhaps wanted something more attractive on his doorstep than a run-down quarry.

The Caves proved extremely popular, with crowds of people venturing to Five Oaks to examine its displays and ever-changing exhibits. 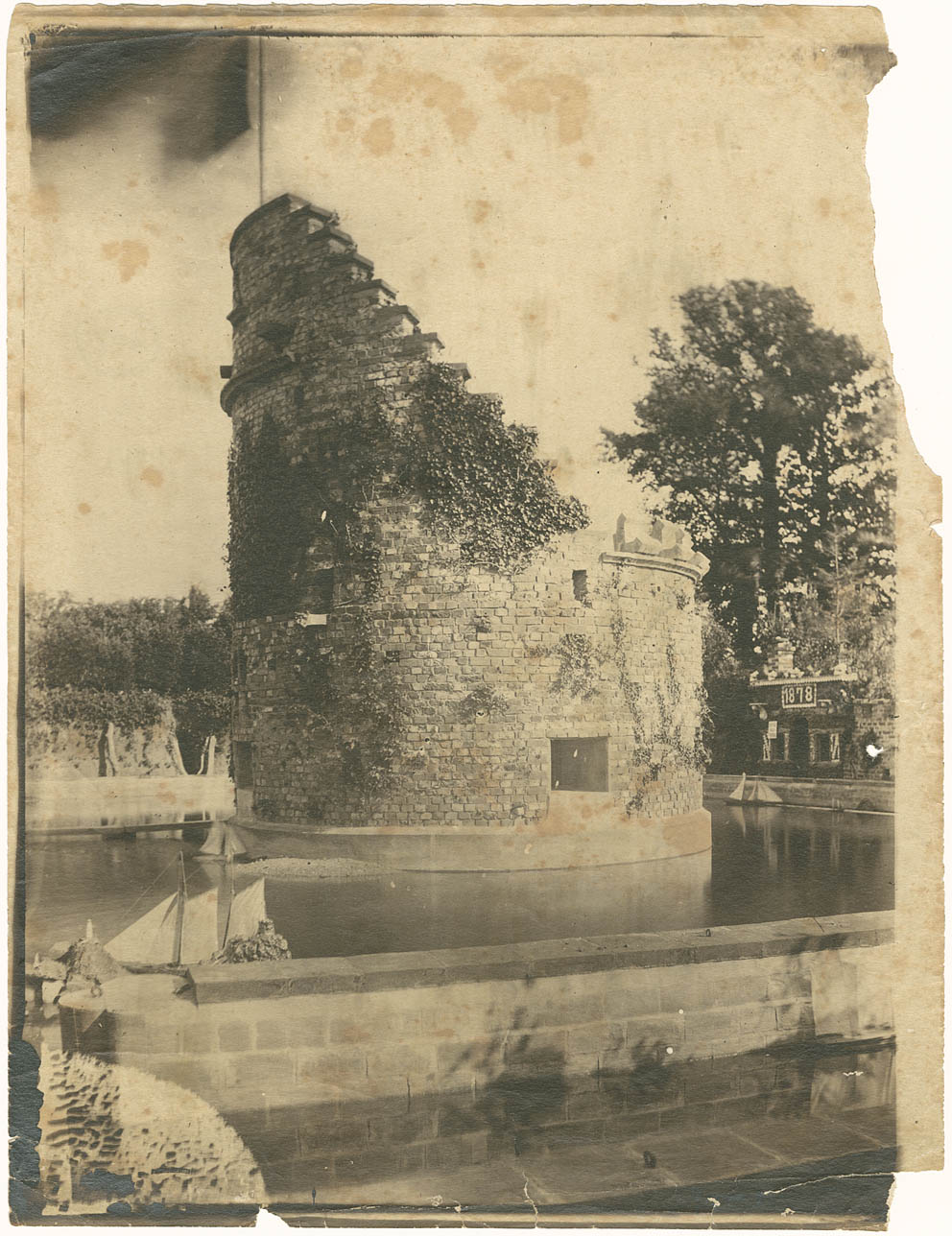 Pictured: The tower in the middle of the lake at the Troglodyte Caves. (Société Jersiaise)

A newspaper article published on 1 November 1879 reported that a large number of people had visited the site and that the 'caves' themselves were not the only draw, with "Uncle Tom's Cabin, the Chapel, the Aquarium" being the main areas of interest.

Visitors were able to use a boat to take them across a lake and convey them to the tower in the middle. Photographs of the time show that the lake was full of model sailing boats.

In 1881, a new statue was unveiled in the form of Cetewayo, the Zulu King, although a report at the time noted: "The centre of attractions was, however, the aquarium, with its fancy grottoes and fernery, illuminated with a tasteful display of variegated lamps, which lent an additional charm to the scene." 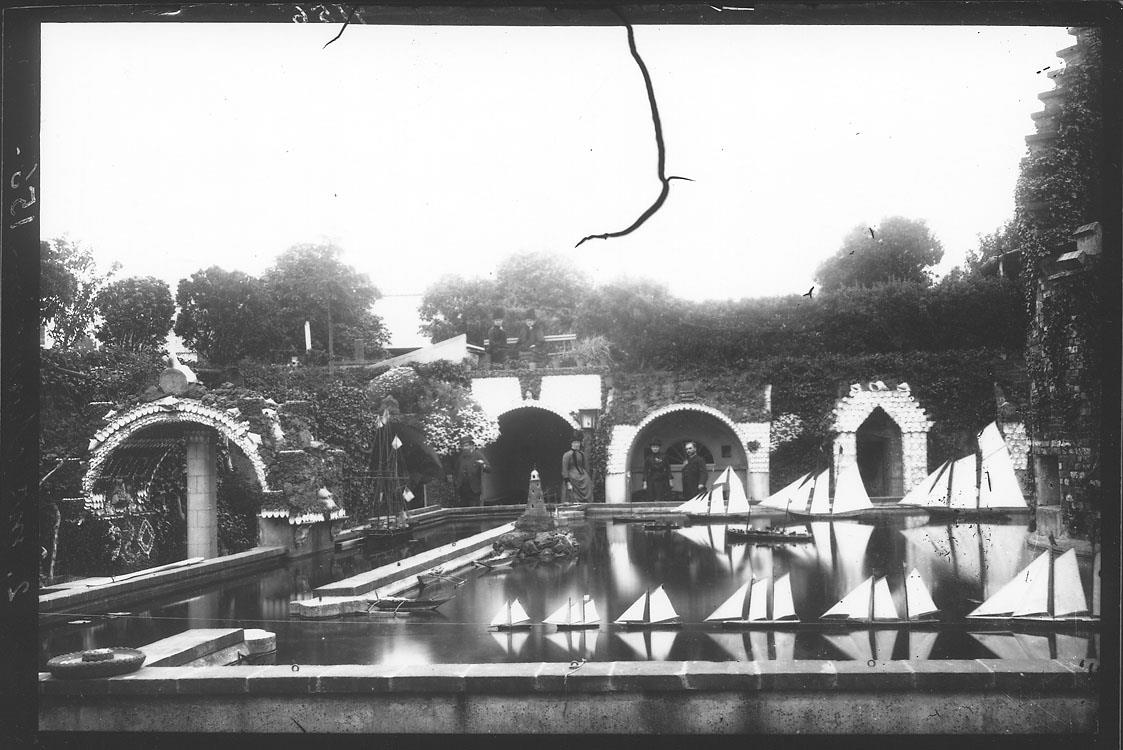 At a similar time, a skating rink was added to the site allowing people to partake in the past time, as well as watch various visiting skaters that Mr Champion employed. The rink also doubled as a dance floor and bands were employed to play for special events. Swings and a bowling alley also became a popular part of the attraction.

An arch was built in 1887 to commemorate the Golden Jubilee of Queen Victoria and became a feature point, often illuminated in the evening along with the rest of the Caves to make the site even more attractive. Later, an archway was added to mark the passing of the Prince Consort, Prince Albert.

By 1888, the Jersey Independent and Daily Telegraph proclaimed that they could safely predict that, "before long the Troglodyte Caves will be, for outdoor amusement, the most popular resort in the island." 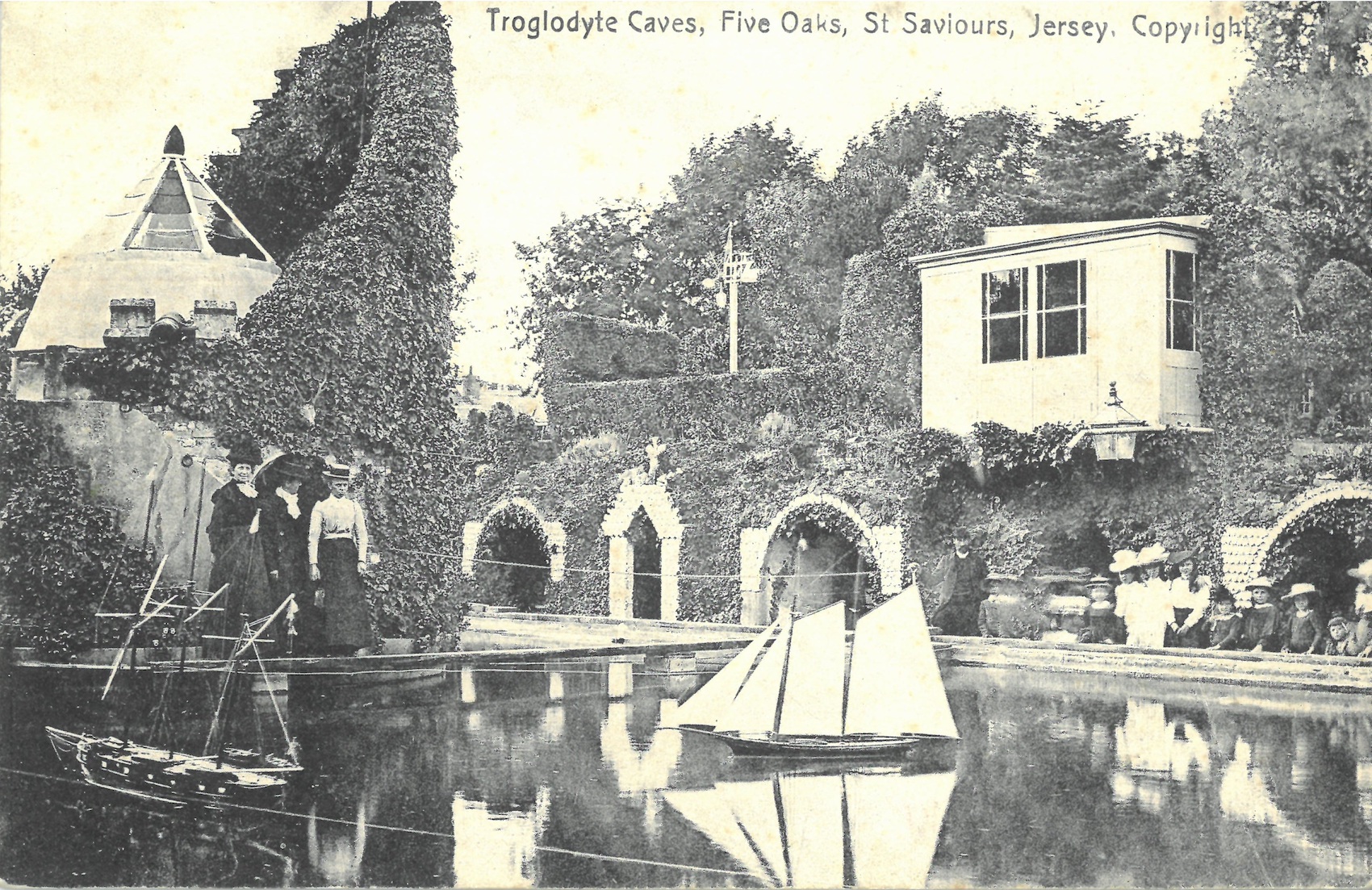 Pictured: Ladies standing next to the tower in the middle of the boating lake. (Jersey Heritage)

By October that year, it was reported that not only were there many curious items of fantastic shapes in melted glass for visitors to see, but Mr Champion had also decorated a brick slab with a cut out of the actor of the day, John Lawrence Toole, playing his comic character 'The Don'. In the late 1880s, Mr Champion also began to hold annual shows of roses, flowers, ferns and fruit in order to attract more visitors to the Caves.

Visitors continued to frequent the site in large numbers with the Jersey Independent and Daily Telegraph declaring in 1894 that the Caves deserved the title of, "one vast museum not to be equalled in the Channel Islands". At this time, it cost 6d to get into the resort. 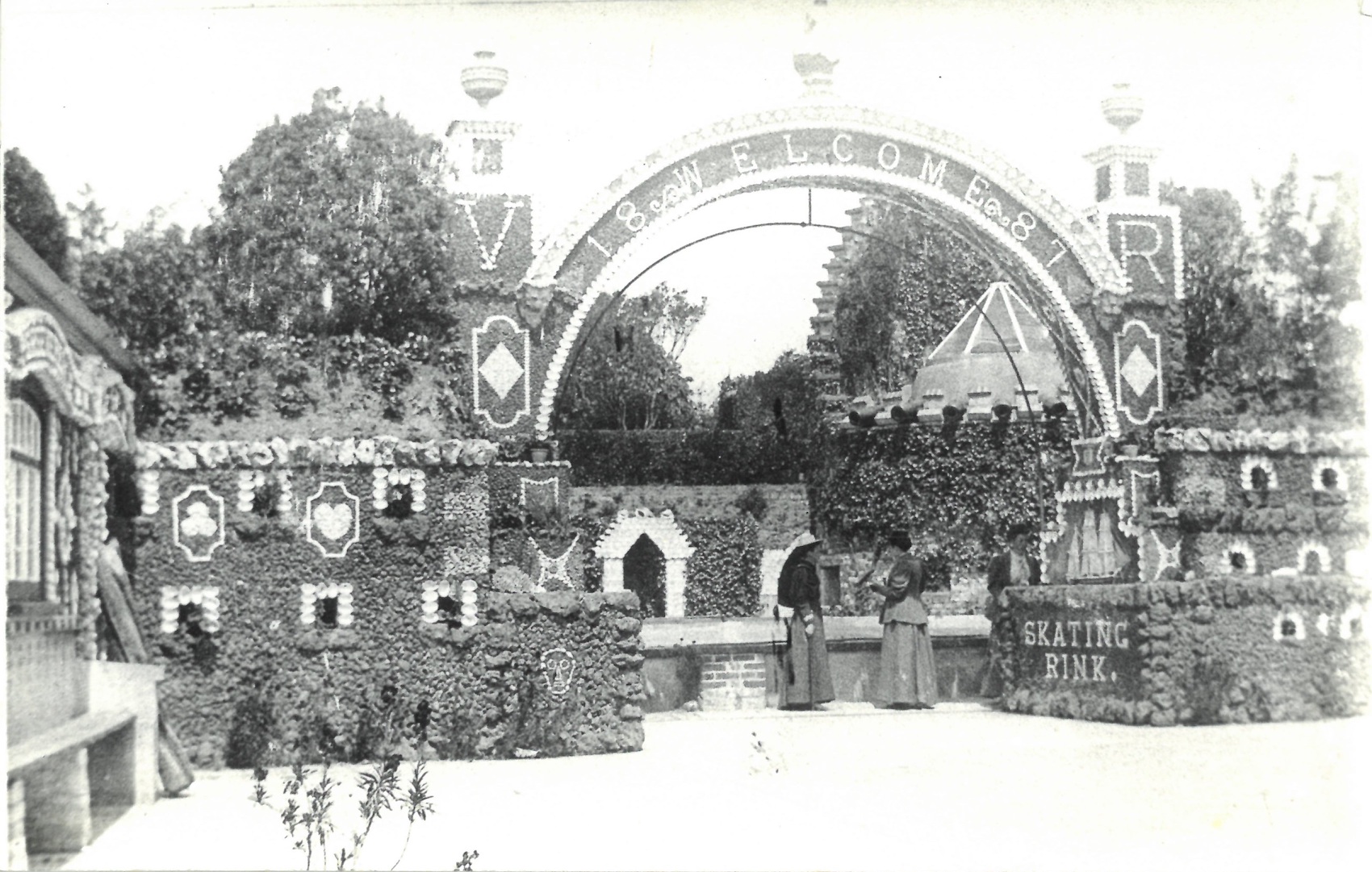 His obituary in the Evening Post noted that at one point he owned seven brickyards in the island and that he was "a most energetic and hardworking man, he led a life of great industry, and continued to take a keen interest in his trade up to the very last".

It also said that he took an immense pleasure from the building of the Troglodyte Caves at Five Oaks.

After his death, the Caves slowly fell into disrepair and were sold to various parties. 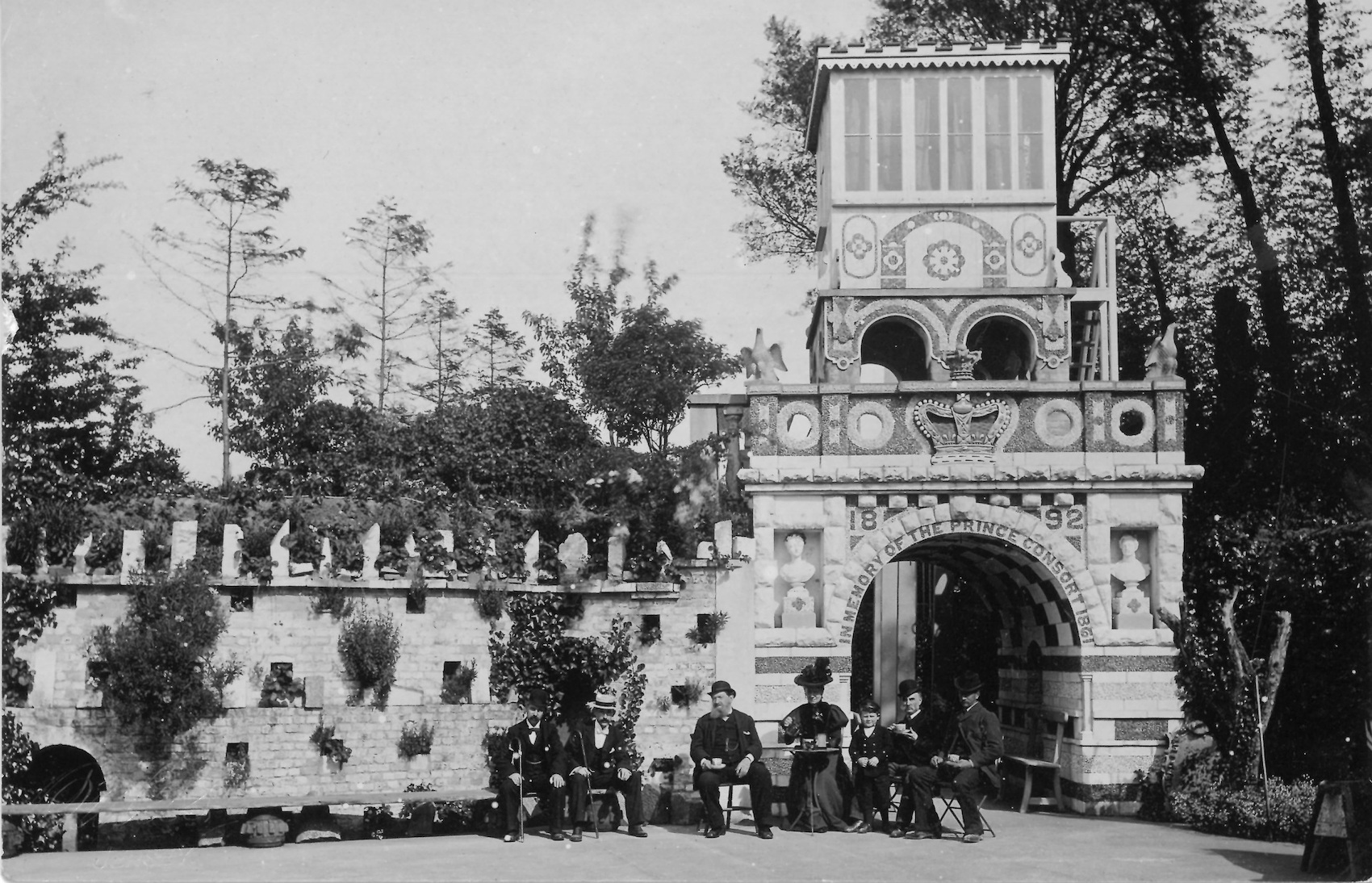 Pictured top: Postcard of the archway commemorating Prince Albert - the man third from left with a beard is John Champion with his wife sat next to him. (Jersey Heritage)

On 30 June 1951, Frank Henry Ferbrache, owner of the Caves, sold them to Senator Carlyle Le Gallais, of the Housing Committee.

Plans were submitted and La Croix de Bois housing estate was built on the site.

To uncover more stories like this, visit Jersey Archive or search its online catalogue HERE.