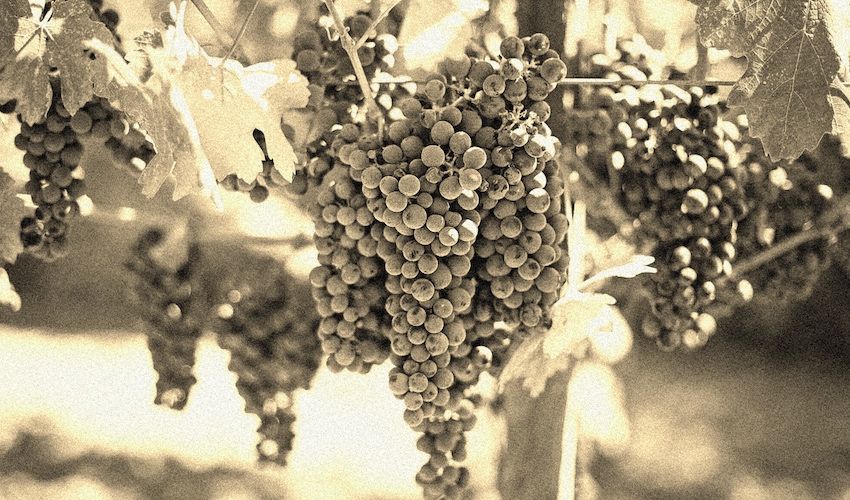 A career burglar, who spent his ill-gotten gains on false teeth for himself and his wife, finally got his comeuppance when he stole some fruit from a home in St. Mary.

The island had been plagued by a spate of burglaries at Post Offices, shops and private residences over three years between April 1918 and October 1921.

The police were stumped and had no idea who was responsible until the perpetrator, Philip Hugh Lesbirel, decided to steal 60lbs of Colmar grapes and they proved to be his downfall.

Lesbirel stole the grapes on 26 October 1921 from Northfield, St Mary, which was the home of Thomas Le Ruez.

After the burglary was reported, Centenier Bisson of St. Mary went into Town and accompanied by Centenier Filleul of St. Helier and PC Le Breton, he visited all the fruiterers in St. Helier trying to trace the grapes. 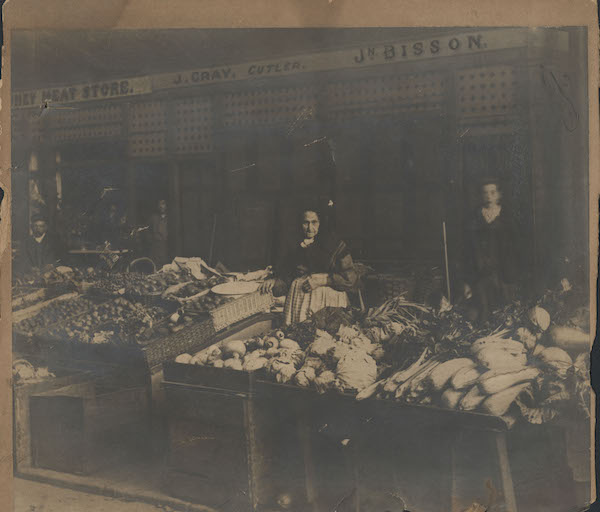 The search initially proved to be unsuccessful but Centenier Bisson asked those in charge of the establishments they had visited to look out for the grapes. The next day, the grapes were spotted for sale in the window of the shop at 17, Burrard Street occupied by Walter Albert Blampied. Centenier Bisson purchased the last bunch of grapes in the shop to show to Thomas Le Ruez, who identified them as his property.

When questioned, Mr Blampied told the Centenier that he had purchased the grapes from a man who had previously supplied him with goods on several occasions over the past five or six years but that he did not know his name.

Mr Blampied was taken to St. Peter and identified Philip Hugh Lesbirel as the man who had sold him the grapes. Lesbirel was asked to come to the Police Station in St. Helier for questioning.

At the same time, Lesbirel’s cottage at Beaconsfield, St. Peter was searched and two baskets full of grapes were found on the premises, along with other items that were evidence that Lesbirel had been involved with a number of other burglaries. 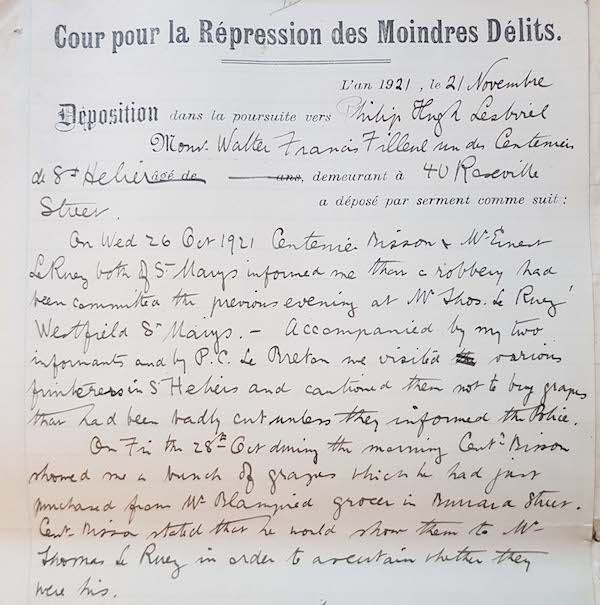 When confronted with the evidence, Lesbirel made a remarkable confession which encompassed over 30 burglaries that he had carried out over the past three years. His confession included that he had accessed ‘Le Brun’s place’ at First Tower by prising open the latch of a window with a knife and taken some bottles on two separate occasions.

He was asked if he broke into Lempriere’s British Hotel at Beaumont and replied: “Yes. I got in by the back window and took the money which I had no trouble finding on the counter.”

When asked how he had spent the money, Lesbirel replied: “I spent fifteen pounds of that money in buying false teeth for myself and having my wife’s seen to.” As to the rest of the money, he said that he “spent it lavishly”.

The search of Lesbirel’s property resulted in the discovery of a huge amount of stolen goods, including “the grapes stolen from Mr Le Ruez’s (stumps produced) , two baskets, a purse, eight tins of zebra polish, a skein of blue wool, a dessert knife, a quantity of leather boot laces, an empty Nestle’s milk box, a pair of scissors and the key of a clock, a lock of molten silver, a roll of serviette material, a waistcoat, shears, a purse, a stylograph, some cigars, a razor, a carpenters brace, three bits, a rule, two pairs of scissors, a pair of field glasses, a rose bowl, a sugar basin, a preserve dish, a pincushion, a jewel rest, a cheque for £84, a cycle lamp, a spirit level, a silver watch and chain, a camera and a brown sachet."

Lesbirel (43) was found guilty on 24 December 1921 and sentenced to seven years in prison for his crimes. He was transported from the island to serve his sentence at HM Prison Dorchester on 24 January 1922.

The Transportation Register includes details about Lesbirel, including that he was married with one dependent.

He is described as previously being of good character and his parents are listed as highly respectable. His father was a landowner who let most of his land and cultivated a small portion.

Also included in the register are remarks from the prison Chaplain about Lesbirel’s intelligence and religious education. The Chaplain writes that Lesbirel was “not lacking in intelligence. Has received quite a fair education…organist at two Wesleyan Chapels and has religious information of a sort”.

Why he turned to a life of crime is unknown...

The 1921 Census for England, Wales and the Channel Islands has also been released into the public domain after 100 years. Islanders are being invited to a free online talk about the records on Wednesday 26 January at 19:30. CLICK HERE to register.

Charlie and Spud arrive to teach children about Jersey history