LOOKING BACK: Islanders flock to see ship run aground 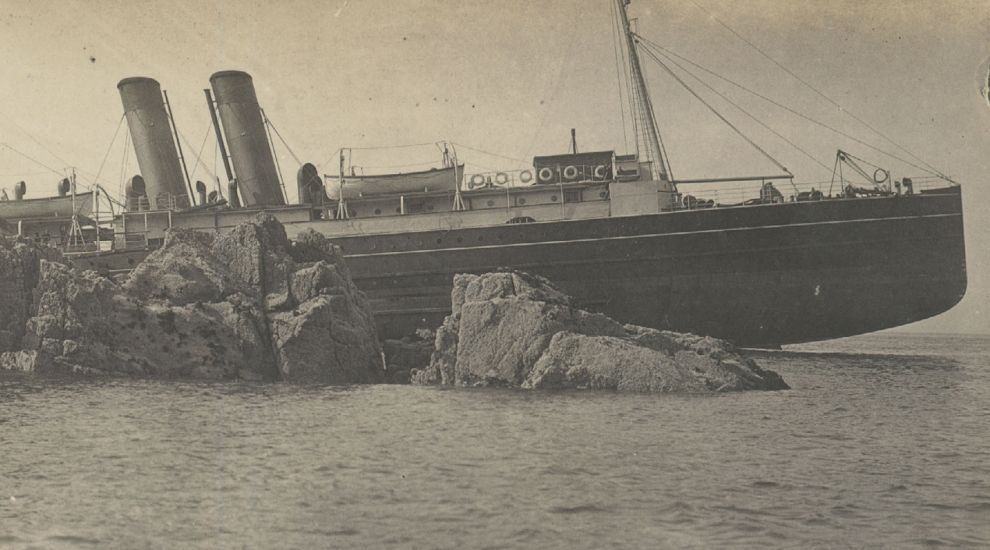 LOOKING BACK: Islanders flock to see ship run aground

A near tragic accident over a century ago became a “must-see” event in Jersey with thousands of islanders flocking to the coast to take in the sight of a massive ship run aground.

It was bound for Guernsey before heading to Weymouth after a brief stop. Unfortunately, it didn’t make it.

Fog descended on the ship as it went past Portelet. Despite this, the ship continued at full pace. About 20 minutes into its journey in calm seas but thick fog, a shout went up that rocks had been sighted. Evasive action was attempted but it was too late! The Roebuck ran aground on the Kaines reef, off St. Brelade's Bay. 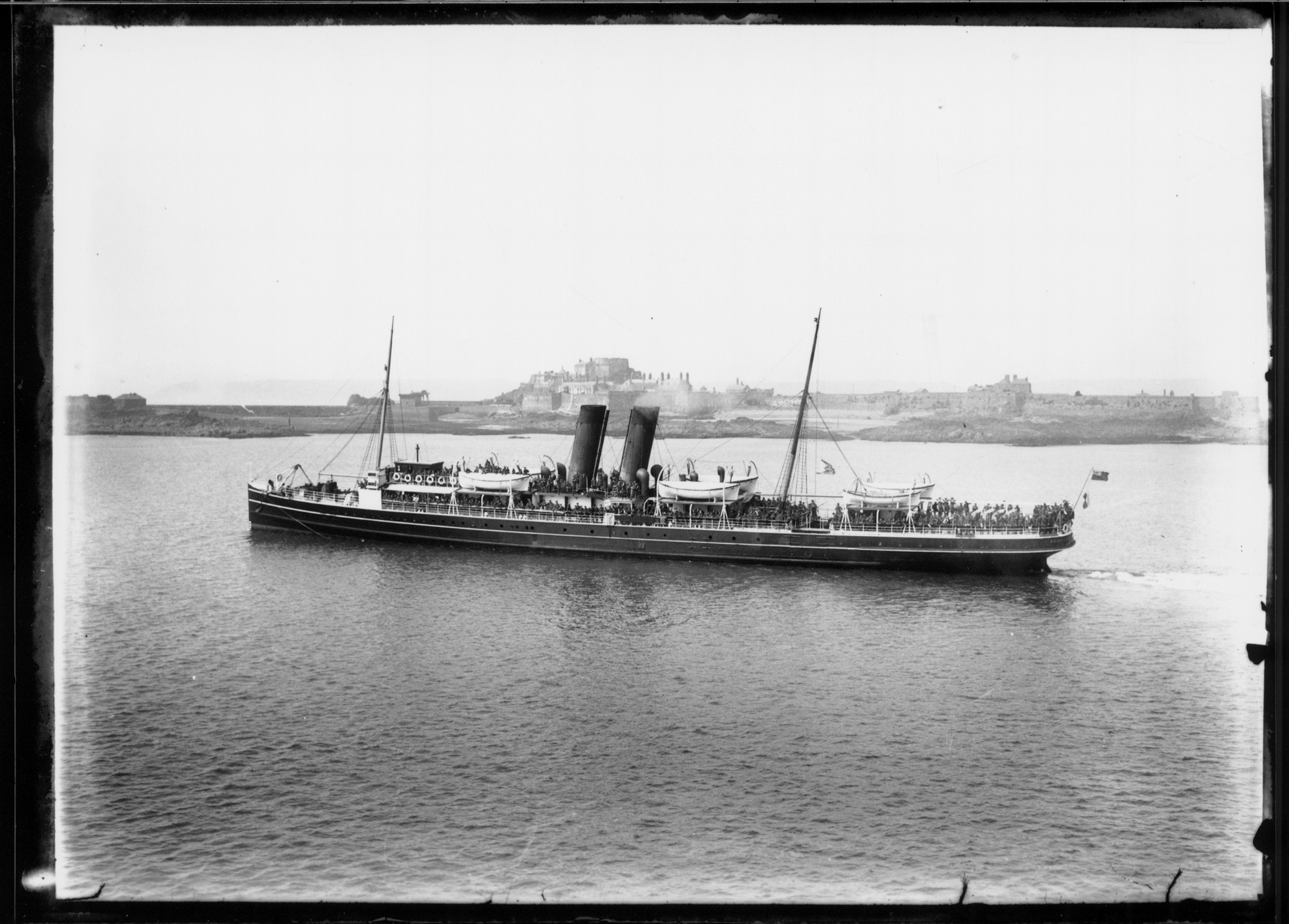 Pictured: "About 20 minutes into its journey in calm seas but thick fog, a shout went up that rocks had been sighted." (Société Jersiaise)

Flares were released and lifeboats launched to offload the passengers, with other nearby vessels coming to assist. A newspaper report at the time stated that this was done in an extremely efficient and composed manner.

Women and children were sent onto the boats first and, despite some tearful goodbyes, families were soon reunited. The tranquil seas meant that all passengers were rescued with no loss of life.

A message was sent to the Harbour Office that a large steamer was on the rocks off Portelet, however, the fog meant that it was difficult to identify which vessel it was. Soon, another call was received confirming that the Roebuck was the ship that was in trouble. 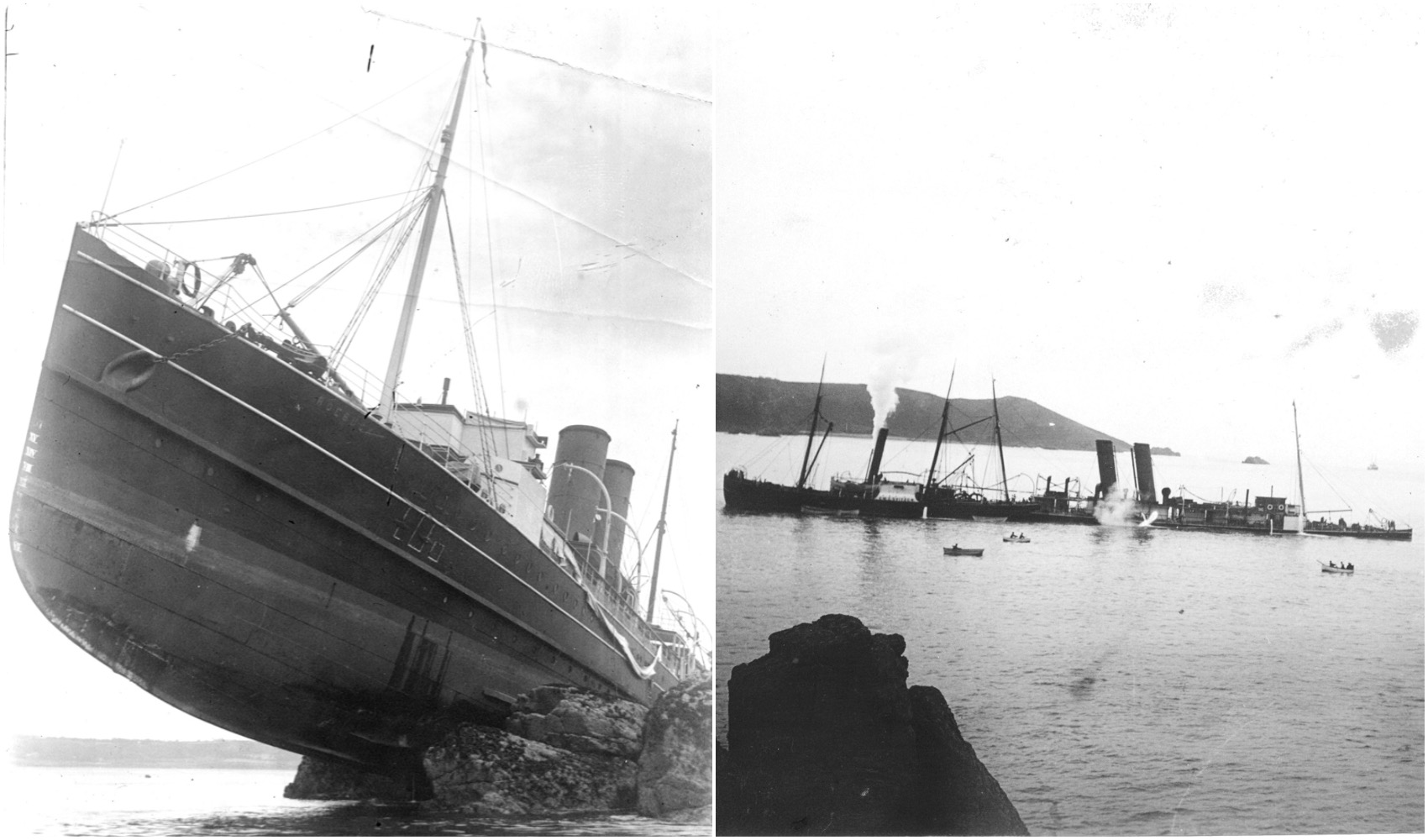 Pictured: "Evasive action was attempted but it was too late! The Roebuck ran aground on the Kaines reef, off St. Brelade's Bay." (Société Jersiaise)

Ships were dispatched from the Harbour to give aid and after all the passengers were rescued, the decision was taken that as the ship was so securely aground, luggage and cargo could be retrieved.

Local interest in the event was at fever pitch by this point. The Evening Post dispatched reporters to the scene and, as well as talking to the crew and passengers, they chartered a rowing boat to go out to the ship and take photographs.

Meanwhile, the railway worked non-stop ferrying spectators to St. Brelade so that they could take in the amazing spectacle. A Mr Le Gallais even put a notice in the newspaper warning that after 22 July, if anyone trespassed onto his property at Beauport, near the La Moye Signal Station, in order to look at the Roebuck they would be prosecuted. 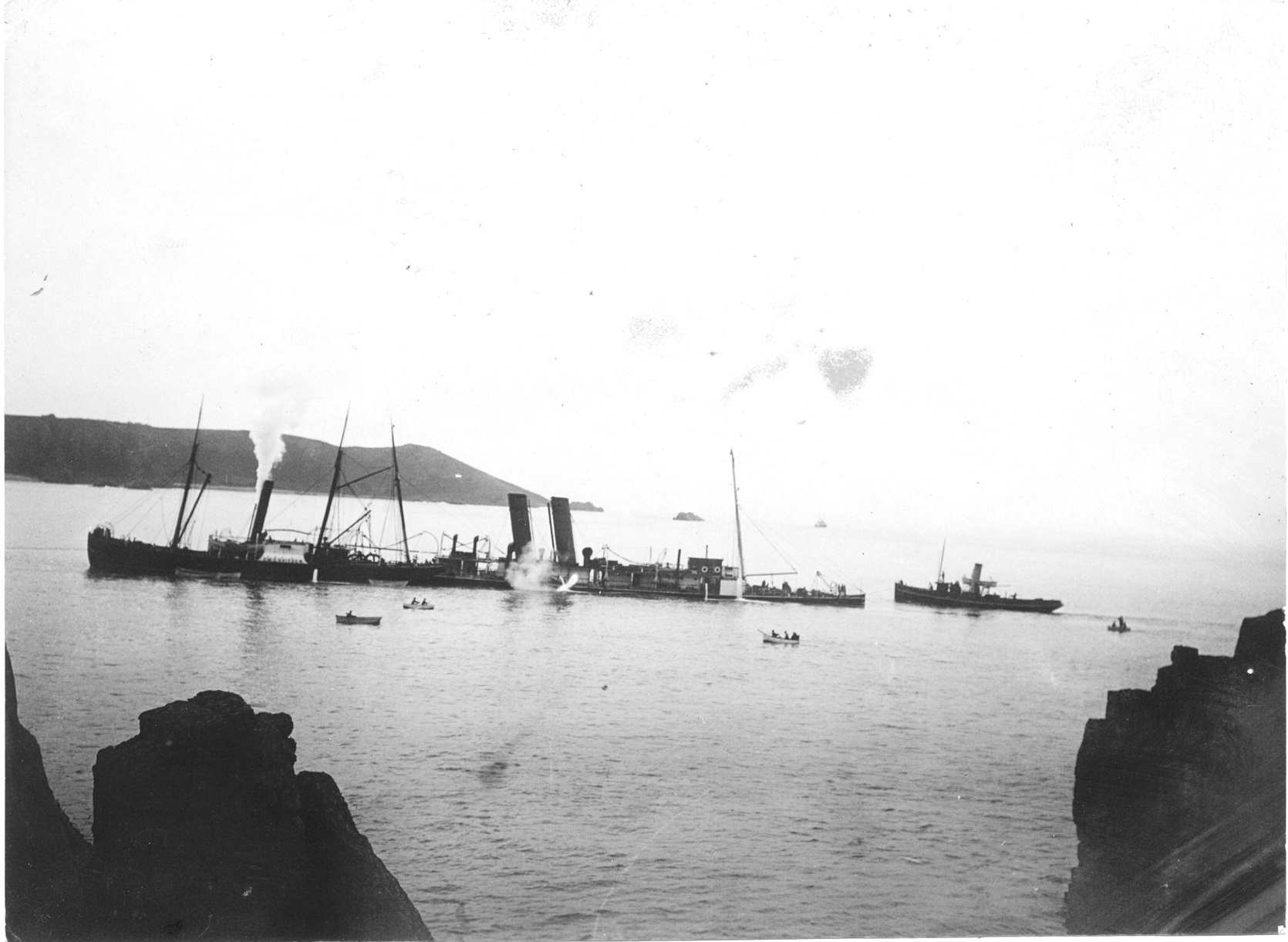 Pictured: "Women and children were sent onto the boats first and, despite some tearful goodbyes, families were soon reunited. The tranquil seas meant that all passengers were rescued with no loss of life." (Société Jersiaise)

Soon enterprising businessmen were at work and a new film called 'The Wreck of the Roebuck' was shown at the Alhambra theatre in Phillips Street, St. Helier, with the advertisement saying that it was "taken at great risk."

Postcards were also created to memorialise the event.

At this point, it was unknown whether the ship would be able to be floated again, with witnesses speculating that it was unlikely.

The Svitzer Salvage Company, of Copenhagen, was employed to attempt to rescue the vessel and they brought over the steamer E M Z Svitzer to aid with this attempt. 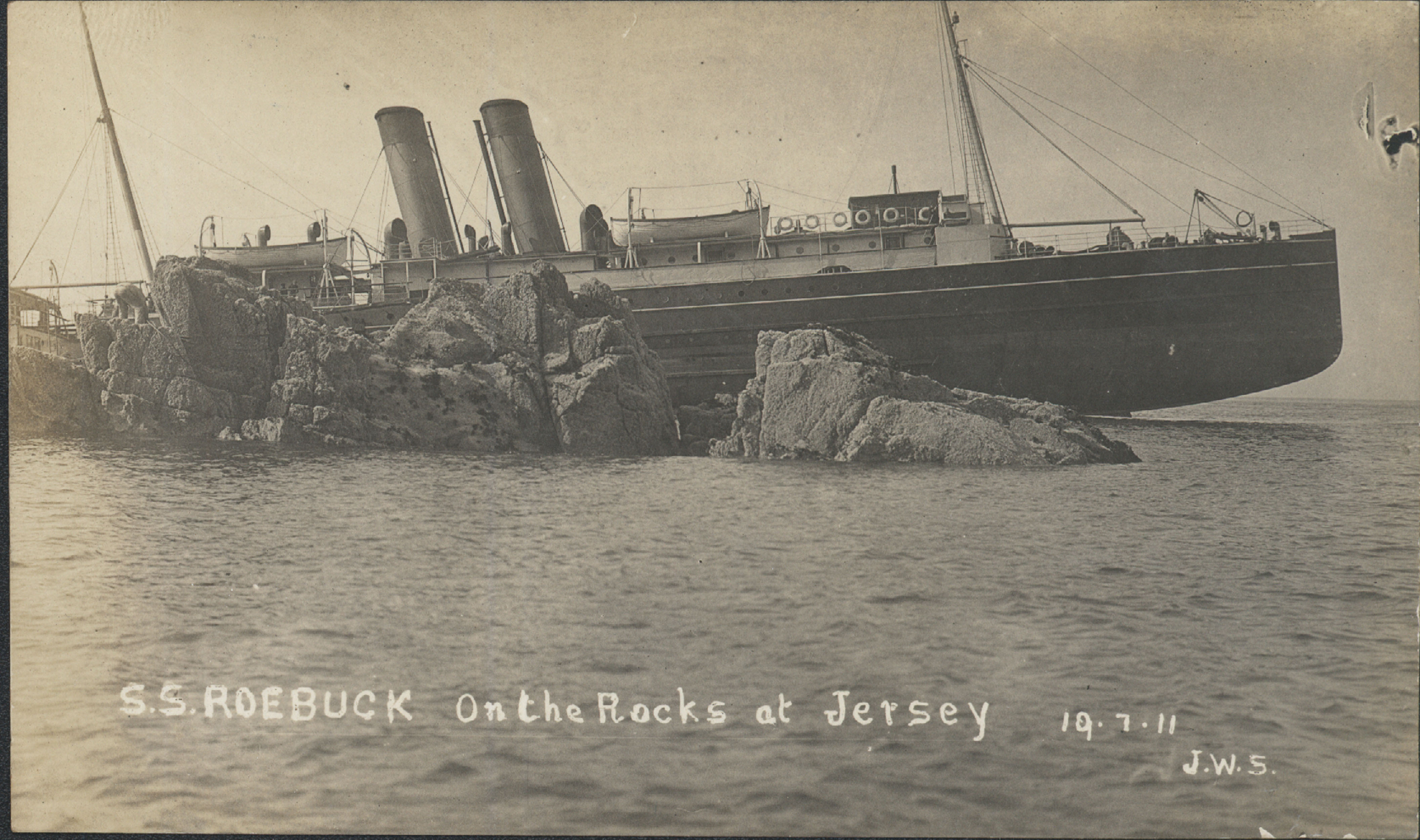 Pictured: A film was made to commemorate the event, as well as postcards, like the one above. (Jersey Heritage)

Representatives of the London Salvage Association also came to the island.

On 22 July, an attempt was made to take the ship off the rocks but the damage was too extensive for it to succeed and the ship was left to settle back down.

Further tries were made in the following days and work was undertaken at low tide to shore up damage caused by the rocks, with the War Department tug Sir Redvers Buller and States tug the Duke of Normandy ready to assist if needed. 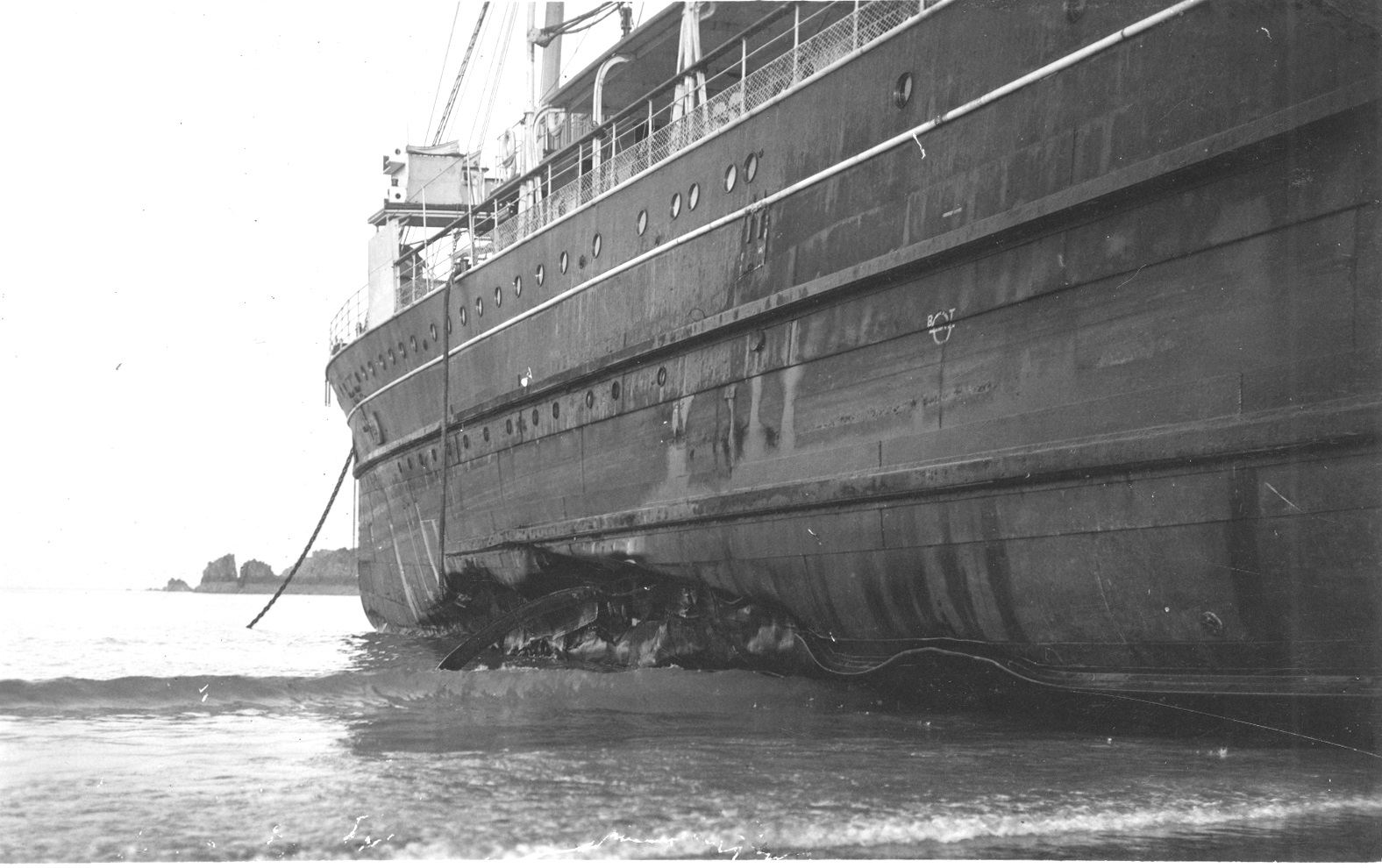 Pictured: Reporters chartered a rowing boat to go out to the ship and take photographs. (Société Jersiaise)

Various local dignitaries including the Lieutenant Governor His Excellency Sir A N Rochfort and Jurat Falle, President of the Harbours Committee, came to witness the attempts, together with thousands of onlookers.

Finally, on 28 July – more than a week later – the Roebuck was towed and beached at St. Brelade's Bay so that more repairs could take place. Captain Shotton, of the London Salvage Association, declared the successful operation, "a proud moment in my life."

On 31 July, a newspaper report estimated that at least 20% of the island's population had gone to St. Brelade's Bay the previous day to see the Roebuck on the beach. Trains were packed to double their capacity, cyclists were out in greater numbers than had ever been seen before and the roads were teeming with horse and carts. 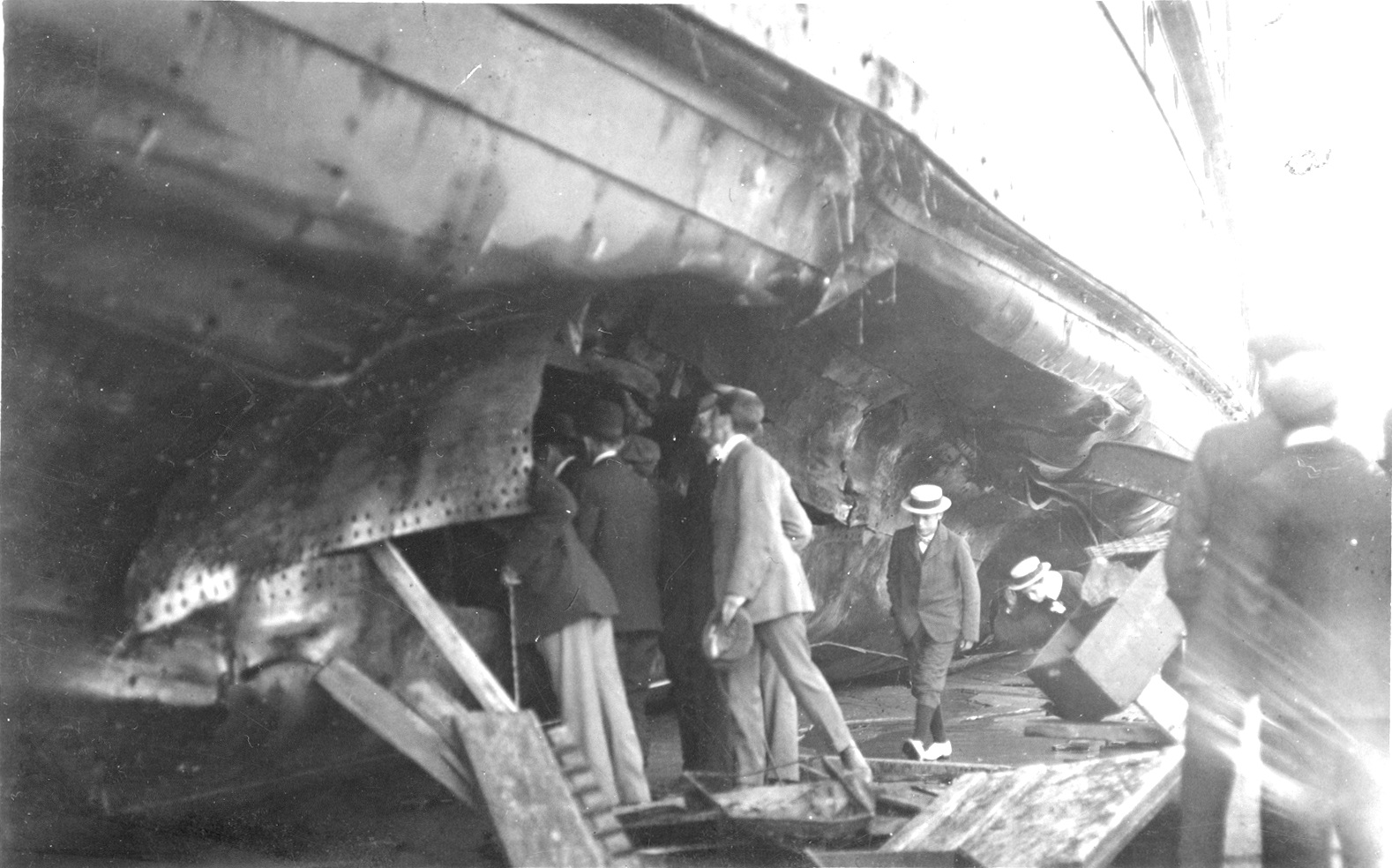 Pictured: It was estimated that as much as 20% of the population had gone to see the Roebuck on the beach. (Société Jersiaise)

A couple of weeks later, the salvage crew decided to move the ship to St. Helier Harbour.

The operation started well but when it started listing heavily to starboard it was beached once again at Bellecroute Bay. It was a temporary stop and the ship was moved to St. Helier later that day. She was taken to Southampton on 29 August to be fully repaired.

An investigation followed and on 14 September, the master of the vessel, Captain John Le Feuvre, was called in front of a Board of Trade Inquiry.

Although the inquiry had some sympathy with Le Feuvre, it concluded that he was wholly at fault, due to the fog and overconfidence in the local waters. His certificate was suspended for three months.

The Roebuck was brought back into service the following year.