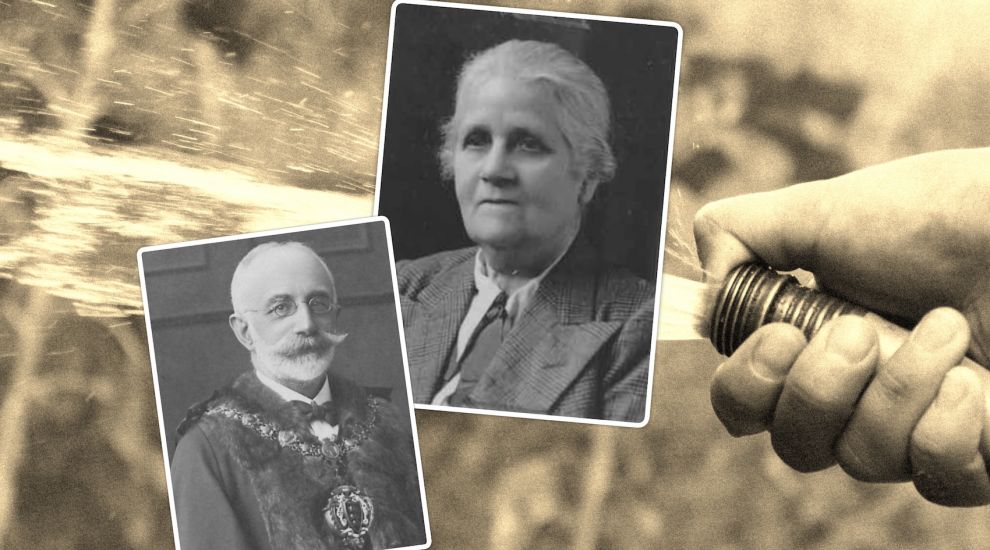 When workmen started tearing up a private garden, the owner and his wife were determined to stop them by whatever means were available, including the clameur de haro - and a garden hose.

Centenier John Edwin Pinel, who was also an Advocate, and his wife, Anna, lived at Belle Plage, just west of the tower at First Tower.

In November 1900, workmen were widening Victoria Avenue and unfortunately, the realignment saw it going through the Centenier’s garden.

The Jersey Evening Post reports that on 5 November, the workmen started taking down fences at the property, as well as digging up several feet of land. Mrs Pinel was at home and the first to see them. 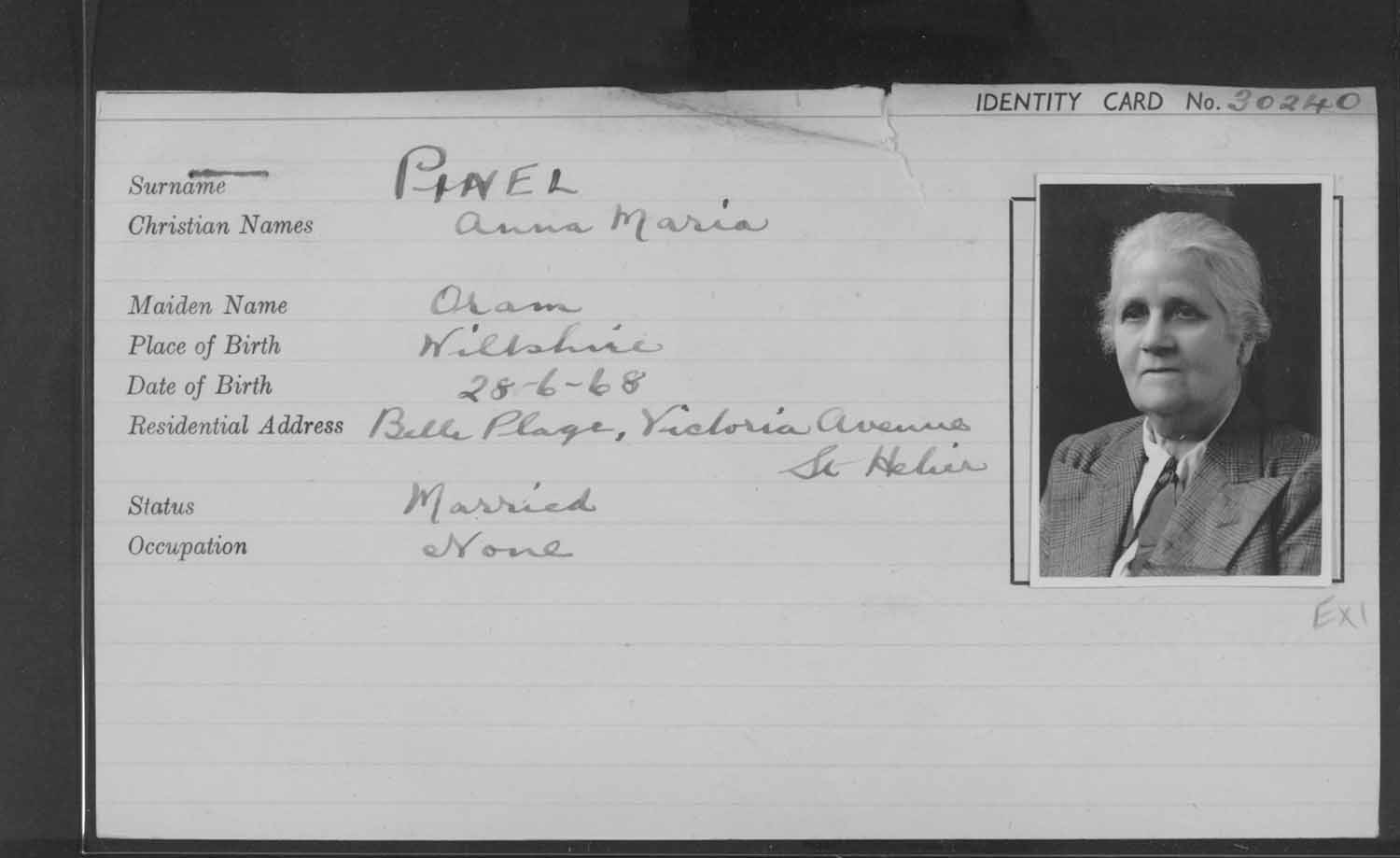 CLICK TO ENLARGE: When she spotted workmen taking down her fences, Anna Maria Pinel soaked them with her hose.

Horrified, she ran inside to telephone her husband and tell him to come home. She returned to the scene outside and turned the garden hose on the offending workers.

Despite this soaking, the foreman told his men to continue digging. But as soon as Centenier Pinel returned, he fell to his knees invoking the clameur de haro and demanding the work stop.

The clameur de haro is an ancient legal procedure that allows a landowner to protest against a trespass on their property. It must be performed on the knees with the person proclaiming, “Haro! Haro! À l’aide, on Prince, on me fait tort,” and the activity of the wrong-doer has to stop until a court can hear the case.

Centenier Pinel’s actions did call an immediate end to the digging and both parties went to court to settle the dispute. On 17 November, they met in court with much confusion over whether the clameur should have been called, whether Centenier Pinel actually owned the land that he was claiming was his and who was acting on whose behalf. 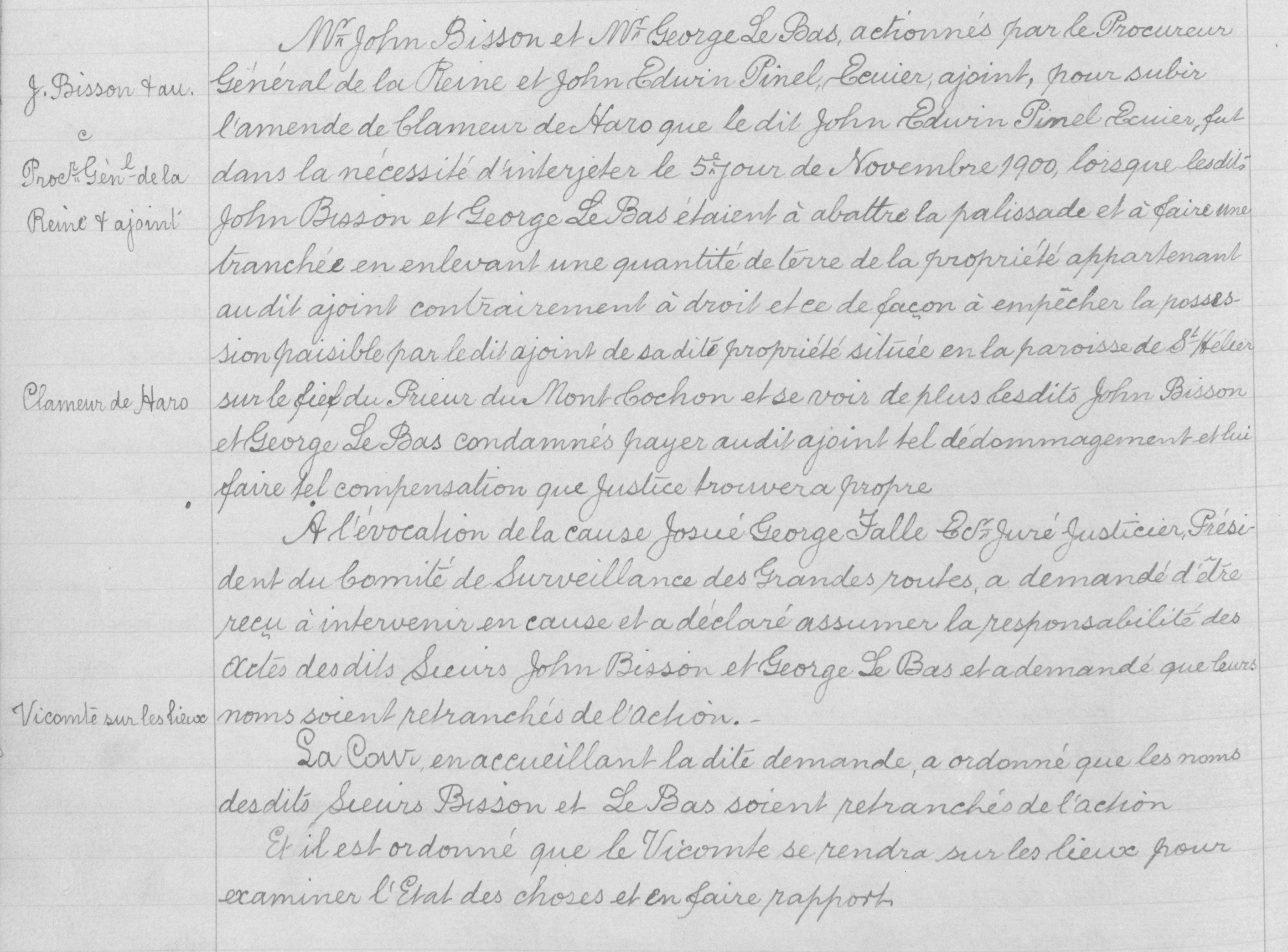 CLICK TO ENLARGE: The court first met to discuss the incident in November 1900.

Three months later, the Court met again on 23 February 1901 to discuss the matter. The case was of particular interest to the Court, as rather than being between two private parties, the clameur de haro was this time between an individual and the States of Jersey in the form of the Main Roads Committee.

Having examined plans and papers relating to the property, the Attorney General concluded that he didn’t believe that the land in question belonged to Mr Pinel and that there was no evidence that the States had given the land to him.

After a long argument, the Court ruled that the clameur de haro had been brought incorrectly, that Pinel did not own the land and that he was to be fined for the offence, although at half the normal rate due to the circumstances.

But Centenier Pinel was not to be deterred.

In June, he brought a case against the Committee of Roads for the sum of £10 compensation for damage done to his fencing while the work was taking place. The Court decided that the case was beyond their jurisdiction as it had been decided already. 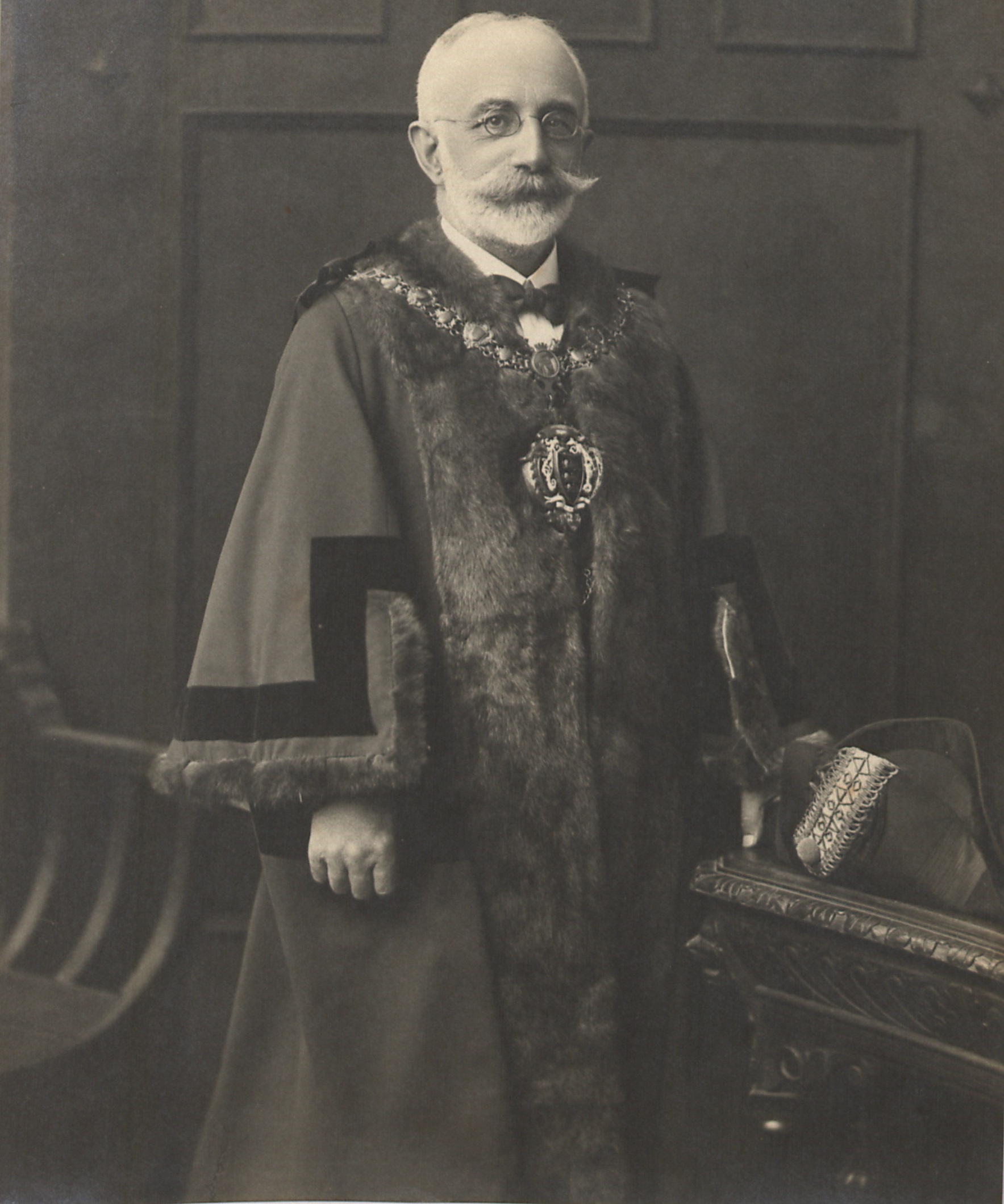 Pictured: Centenier John Edwin Pinel sued the President of the Main Roads Committee, with the Committee eventually agreeing to build him a new stone wall.

They did comment that they thought that some attempt at compensation should have been arrived at by the Committee of Roads.

A month later, in one last attempt to receive compensation, Pinel sued the President of the Main Roads Committee, Jurat J G Falle, for property acquired by the Committee for the continuation of work on Victoria Avenue, as well as the sum of £200 for damages and £1 per day until the damage was repaired.

Pinel said that in reality, the damage was inconsiderable but that there was a certain amount of moral damage suffered. He said that “the case was only brought owing to the unjustifiable attitude taken by the committee”. 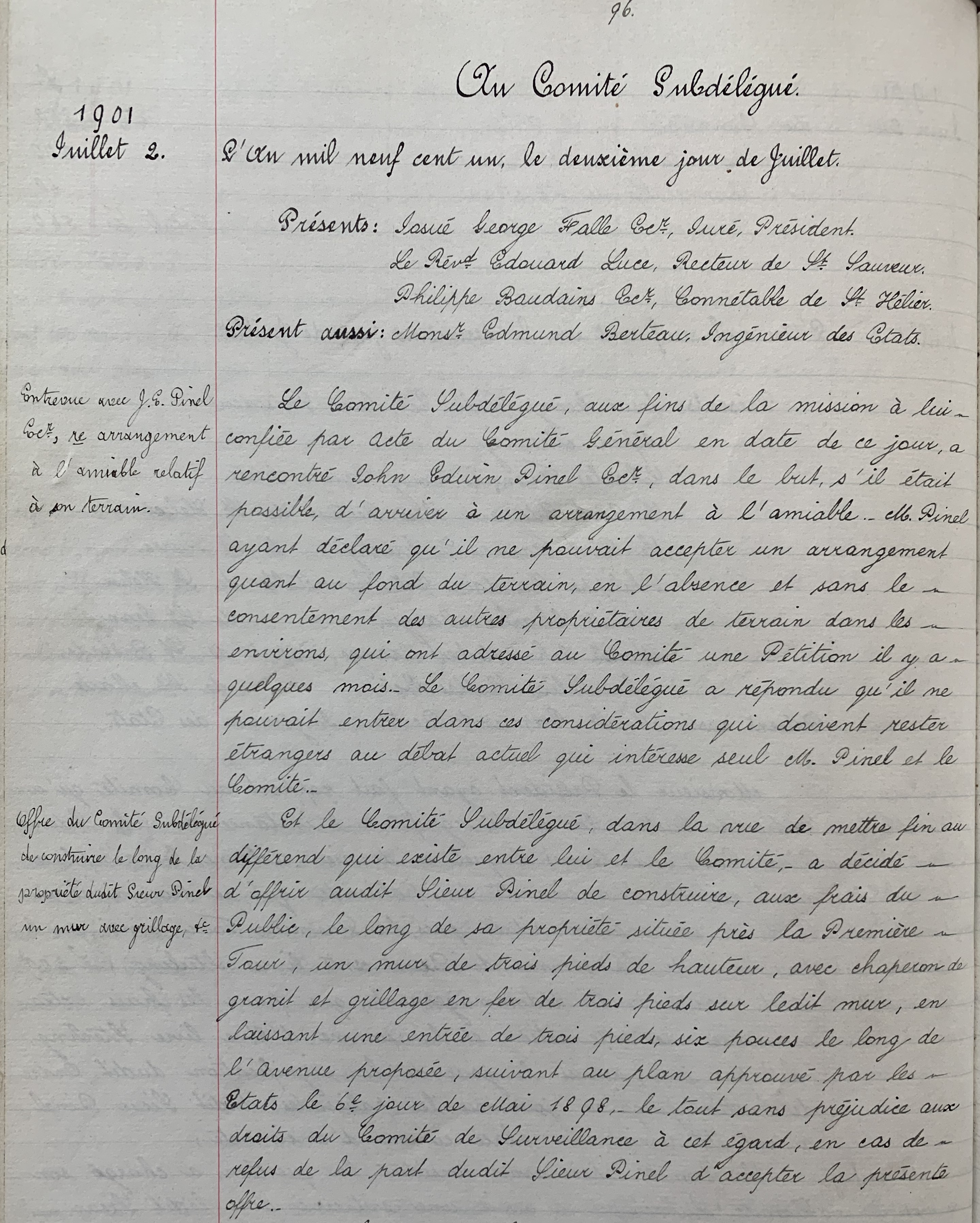 CLICK TO ENLARGE: The offer to Mr Pinel to build the new wall.

Perhaps realising that he wasn’t going to give up, the Committee decided to come to an amicable agreement with Centenier Pinel over the case.

They agreed to build a new stone wall, with iron railings, at their own expense along the border of his property. Pinel was happy with this offer and the case finally came to close.

Evidently, this saga did not put off Centenier Pinel from being involved with the States and Honorary service. He later became the Constable of St. Helier and was influential in the parish with, among other things, Mont Pinel, just off Mont Millais, being named in his honour.

This story was told as part of a series in collaboration with Jersey Heritage. You can learn more about the clameur de haro at Jersey Museum's latest exhibition, 'People! Power! Protest', and to uncover more stories like this, visit Jersey Archive or search its collections online.