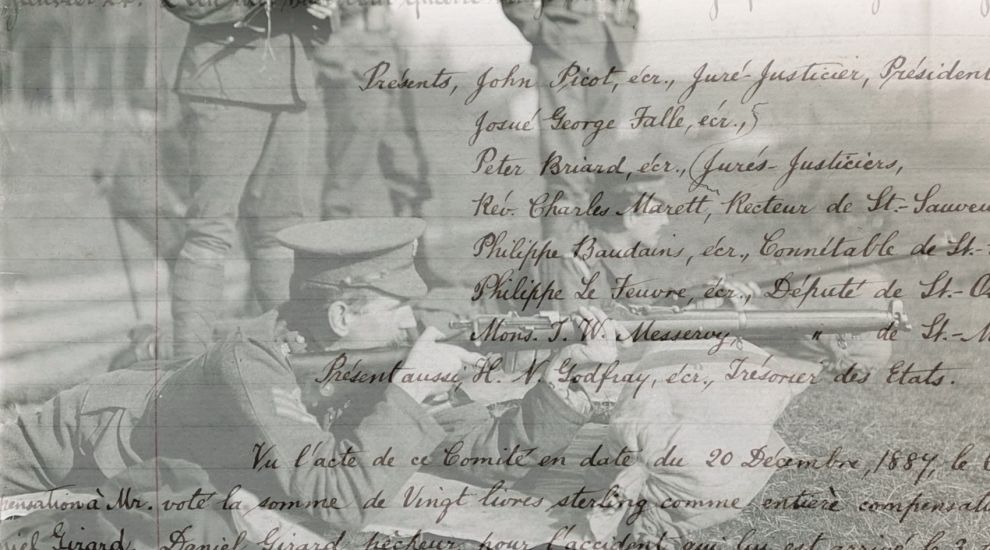 As part of our series with Jersey Heritage, this week we feature a father-and-son fishing trip in 1887, which took a dangerous turn when the dad was shot by a stray bullet from a nearby shooting range.

The dramatic accident took place just before lunchtime on 3 August, when Daniel Girard and his son, William, sailed from St Catherine’s Bay, where they had been fishing, and anchored their boat in Gorey, near Azicot Rock.

At the same time, members of the Militia were practising their shooting on Gorey Common.

The Girards were just finishing up their lunch when Daniel suddenly felt a blow and exclaimed, “I am hit”, as blood started flowing from his left shoulder. A wayward bullet from the Militia practise had struck the 76-year-old and caused a serious wound. 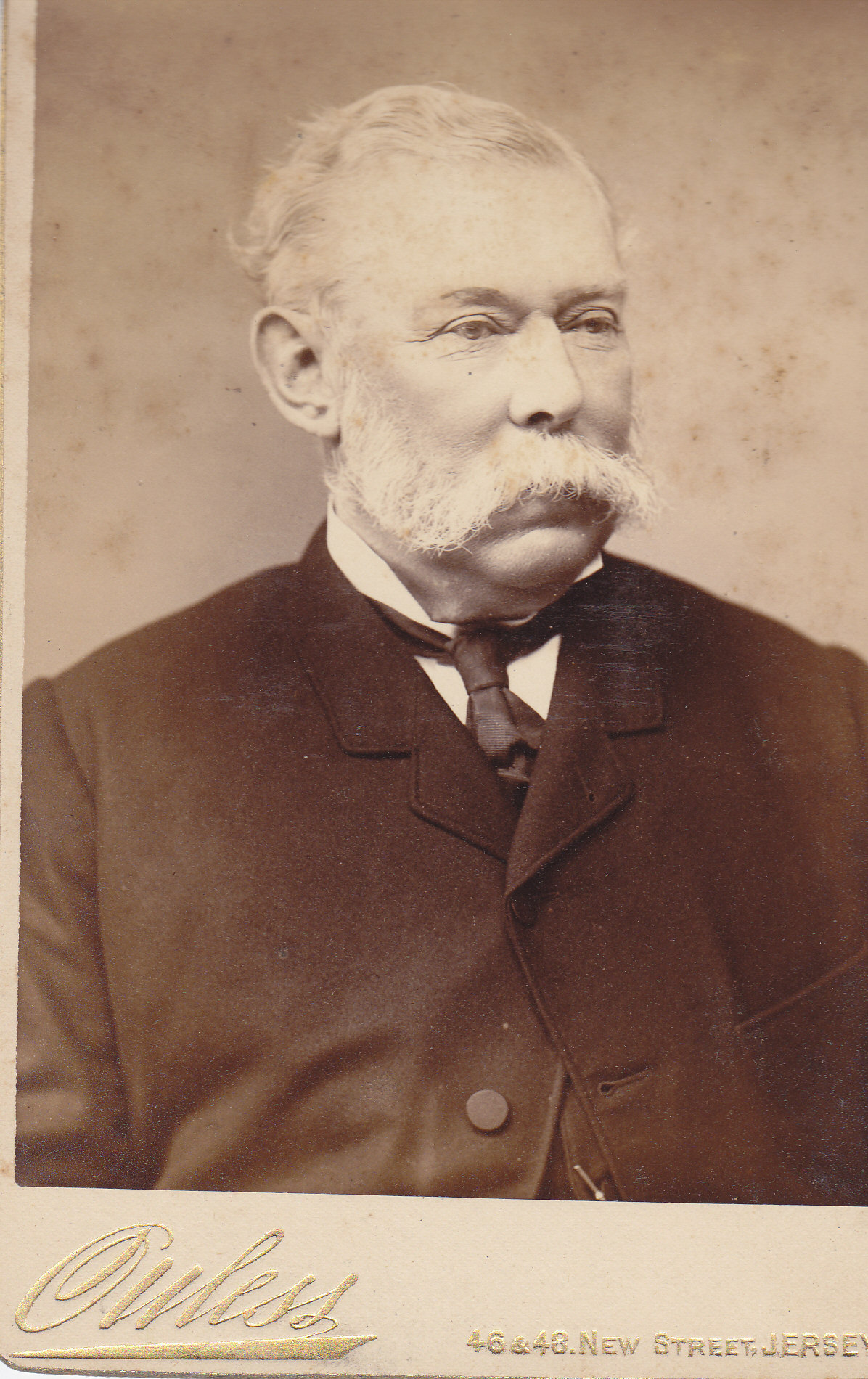 Pictured: An enquiry into the shooting was ordered by the Lieutenant Governor of the time, Henry Wray.

They immediately sailed to a Cutter called The Guide anchored nearby, which took them to shore and Daniel was taken to the General Hospital.

An enquiry was immediately ordered into the incident by the Lieutenant Governor of the time, Henry Wray. Colonel Charles Philip Le Cornu was tasked with finding out what had taken place that day and he set about talking to all of the people involved.

The group who were drilling at Gorey were the St Saviour’s Company of the 2nd East Regiment of the Royal Jersey Militia. They reported that at the time of the accident, they had experienced markers on duty, whose job it was to stop the firing if a boat or person went across the firing range radius.

None of the markers saw Girard’s boat, although they did recall seeing the Cutter. They also didn’t recall seeing any shots that would seem to be heading in the direction of where Girard’s boat was supposed to have been anchored. 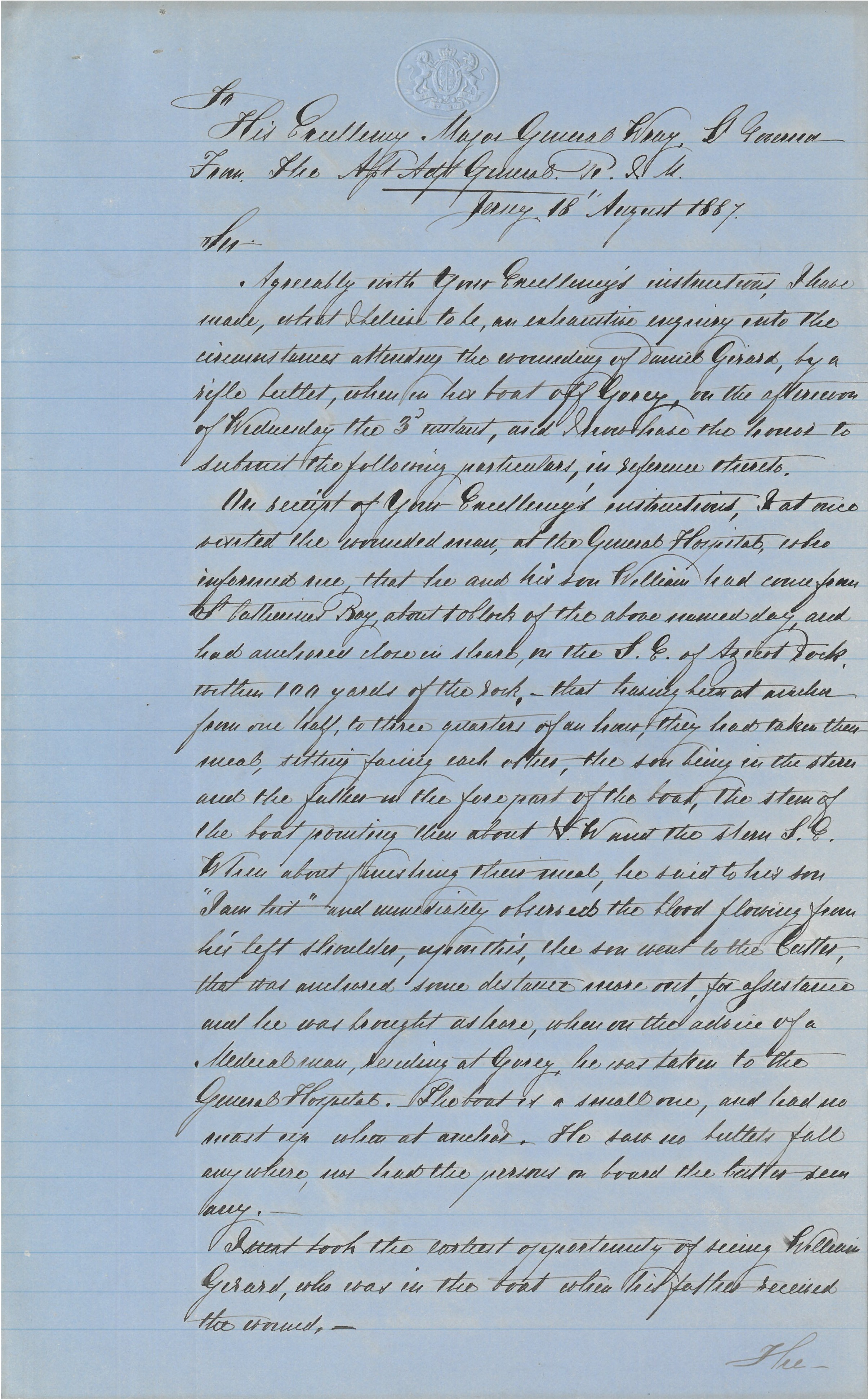 Pictured: The front page of the report by Philip Le Cornu.

The markers said that they had, however, stopped the shooting several times as a result of boats sailing and people walking behind the range.

The master of the Cutter recalled taking Girard to shore and said that he then returned his vessel to its previous position, despite continuing to hear bullets whistling nearby. They didn’t move the boat although the Master did comment, “it’s rather hot here, let us go below”, which they did.

The crew also remarked that when going into Gorey Harbour, the boats had to tack quite wide to do so and so sometimes may have come within range of firing.

Centenier Picot of Grouville also mentioned the same, saying that the 600-yard range as it was established, “is inconvenient to vessels tacking in and out of Gorey Pier, and attended [sic] with danger, if firing is not absolutely stopped at such times”. 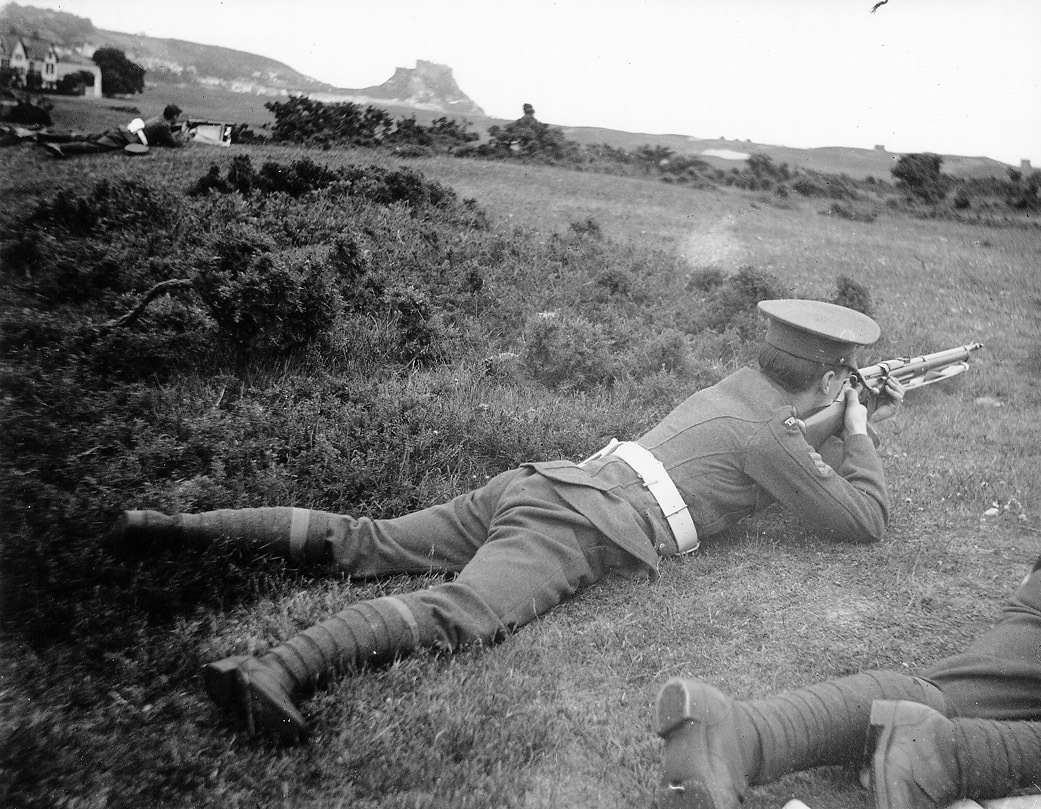 Pictured: A later picture of the shooting range at Gorey Common, courtesy of Société Jersiaise.

Colonel Le Cornu concluded that the bullet that hit Girard must have been fired, in a careless manner, from the shooting range but that it was impossible to tell by whom. He recommended that the targets be moved so as not to endanger boats coming in to Gorey Harbour.

The Lieutenant Governor sent the report to the States and asked that Girard be given due support considering his injury. The Defence Committee voted to compensate Girard £20 for the accident, as well as to buy him a new boat.

After this, time Daniel appears in Hospital Committee documents as receiving financial support from the States. However, the accident doesn’t seemed to have affected his longevity as he survived until the age of 90, eventually passing away at Hauteville, in St John’s Road, in 1900.

Interestingly a couple of years later the safety of the shooting range was raised once more. Captain Tempest Hicks of the 3rd Jersey Militia wrote to Colonel Le Rossignol on 30 May 1889 recounting the difficulties facing the militia when taking part in shooting practise on the Common. 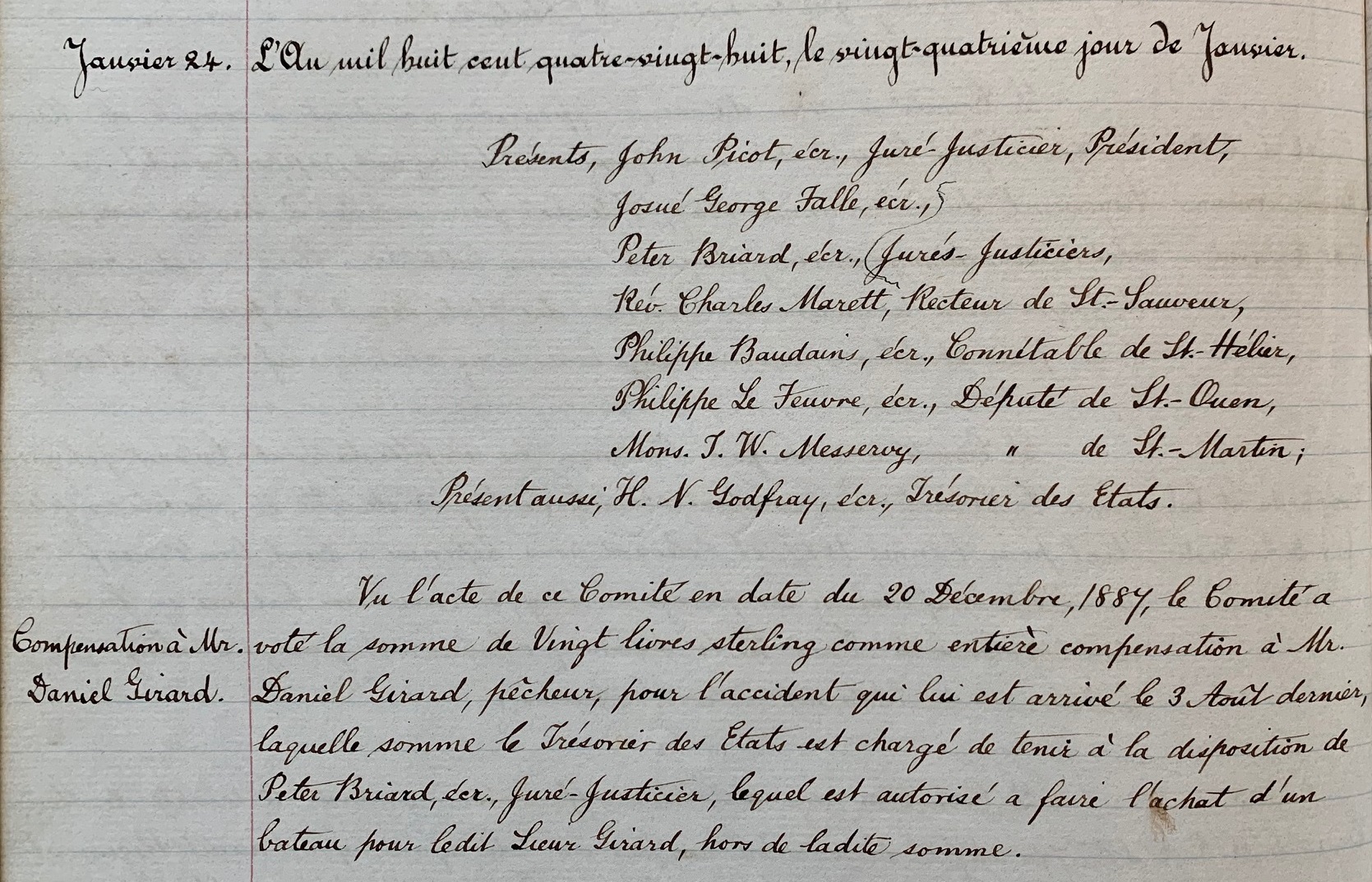 Pictured: Minutes from the defence committee relating to the compensation of Daniel Girard.

He wrote: “Boats during the firing, row out, anchor, and trawl, between the buoys, remaining there for one, two, or three hours, or half a day-notwithstanding all efforts by signal or otherwise to induce them to move.

“The inhabitants, more particularly at low tide, cross and recross behind the targets, or remain there, loitering about, finding, it is presumed, that on their approaching the range, all firing is to [be] stopped, that they can do as they please with impunity.”

He went on to say that he suggested that something be done about it as it was a waste of time for the troops to have to come out to train and yet not be able to accomplish anything.

He pointed out: “I paraded sixty recruits at 9.30 on Gorey Common on Wednesday the 22nd instance and left at 12 noon without firing a shot, a boat being anchored between the buoys.”

At the time, the Lieutenant Governor did ask if anything could be changed to stop encroachment during training but nothing seems to have been done to improve the situation. The range continued to be used although it later fell into disuse.

Posted by Martin on Jun 29th, 2021
Maybe we should utilise the common as a shooting range again to ward off stray foreign fishing boats?
Posted by Scott Mills on Jun 29th, 2021
Back then, playing golf would have been interesting.
To place a comment please login Login »