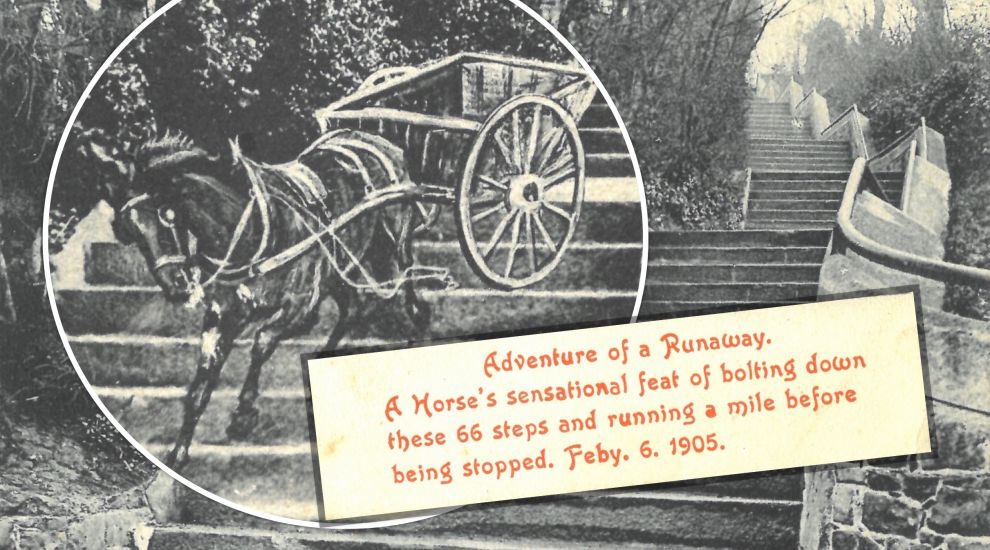 A St. Helier Roads Inspector watched his life flash before his eyes when he was faced with a panicked horse pulling a cart through town at great speed.

Mr Le Brun, of Clubley Farm, Mont à L’Abbé, had been walking his horse at the top of the hill past the old cemetery after planting potatoes in a nearby field. He was returning home and the horse was pulling a cart laden with empty potato boxes.

As he passed the cemetery, one of the boxes fell from its load onto the horse’s back causing it to panic and bolt down the steep hill. Mr Le Brun attempted to restrain it but without success.

When the horse reached the almost 90-degree bend at Trafalgar Terrace, it was unable to turn the corner and instead took the easiest way available to it, which was the steep steps down to Queen’s Road. 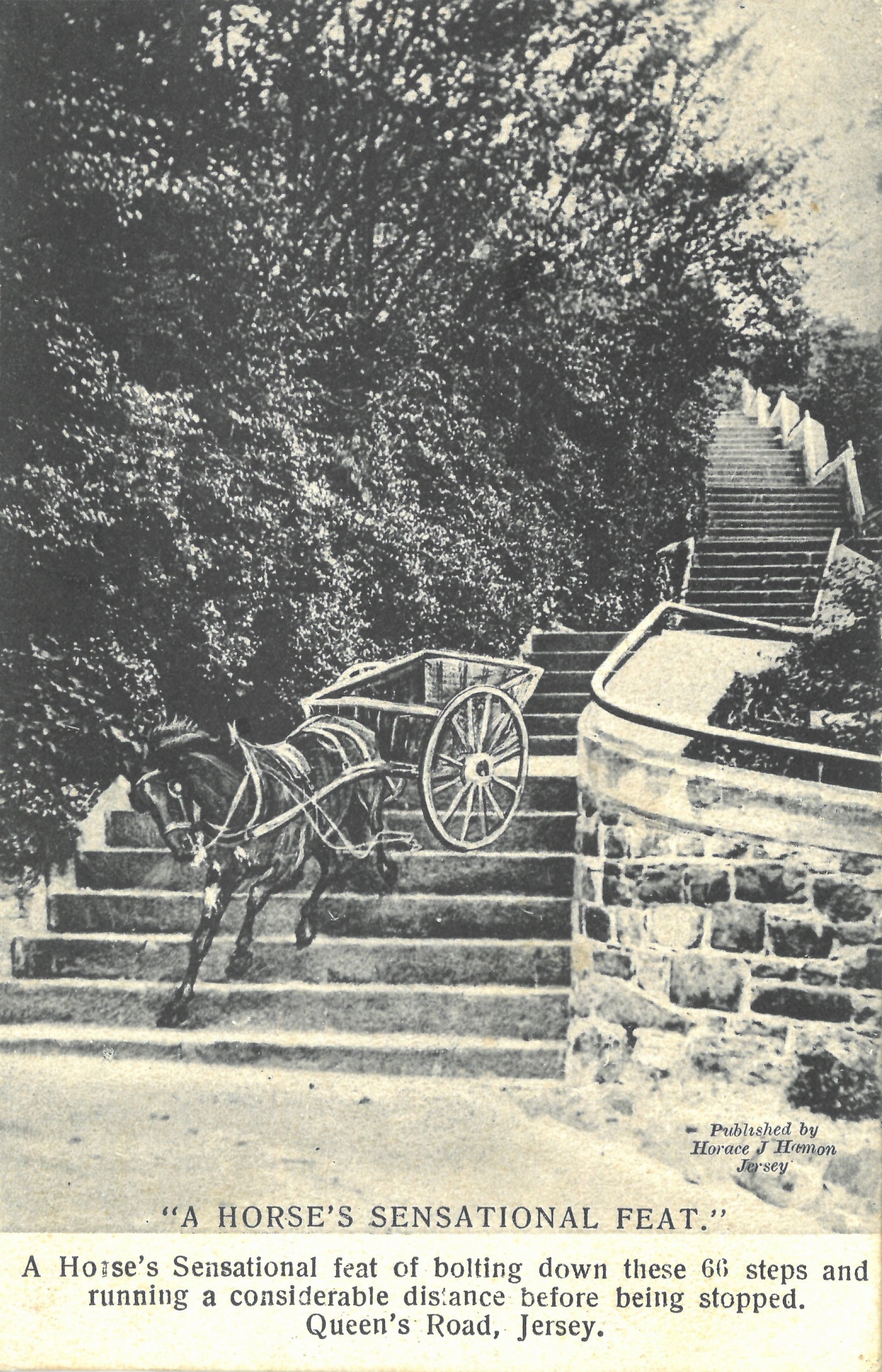 Pictured: Postcard of a horse hurtling down the steps as imagined by Horace J Hamon. (Jersey Heritage)

Unfortunately, at that moment Mr Manning was using the steps to return home. He heard a cacophony of noise and looked up to see the horse and cart bearing down on him. He attempted to slow the horse in its progress but very quickly realised that this was an impossible task and flung himself over the low wall to the left of the steps to avoid being crushed.

The Jersey Independent and Daily Telegraph reported that this action meant he averted "certain death."

Remarkably, the horse and cart reached the bottom of the 66 steps relatively unscathed but still in a terrified state. It collapsed to the floor where a growing crowd attempted to rouse it. Scared again, it rose of its own accord and set off down Queen's Road to the Parade, through Charing Cross and King Street, before being calmed by a man called T Perrée, who managed to coax it to a halt in Queen Street. 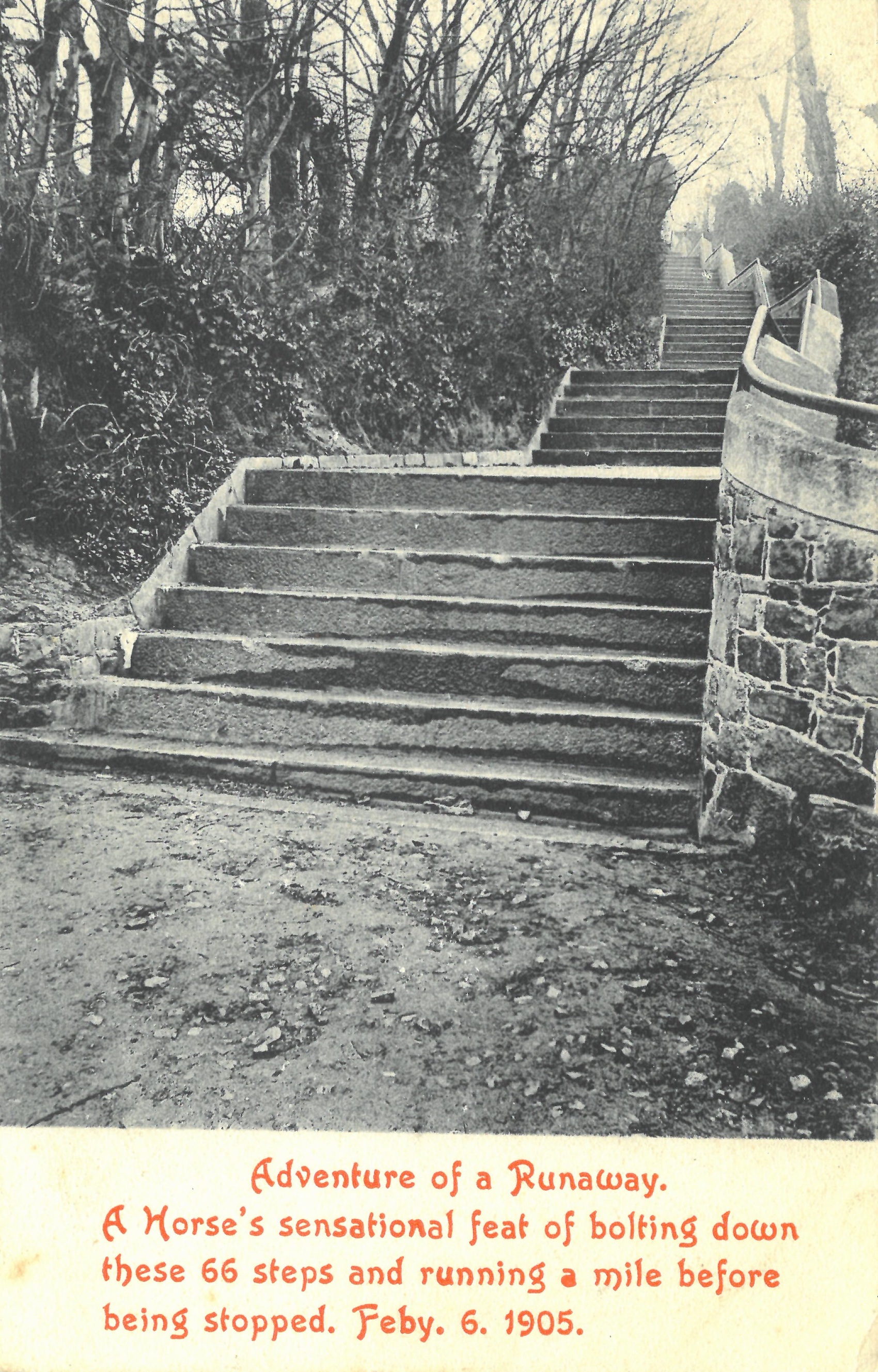 Pictured: Postcard photo looking up the stairs from Queen's Road to New St. John's Road that the horse bolted down. (Jersey Heritage)

On examination, the horse and cart showed little evidence of the remarkable adventure, with the animal surviving its escapades with only grazed knees and a few cuts on its hind quarters. The steep steps did not fare so well, with granite broken from almost all the edges of the walls and hoof prints marked along the way. According to the newspapers, the large group of passers-by, who witnessed the events, walked away in doubt that it had happened.

When Mr Manning was interviewed in the following days, he declared that he had an extremely fortunate escape and said that it was lucky that none of the residents of the Little Sisters of the Poor were returning up the steps at the time as they may not have been as able to evade the beast.

There were no photographs of the incident but the spectacle caused postcard manufacturers to commemorate the event. An image of the horse and cart was taken the following day, as well as the stairs where it took place. 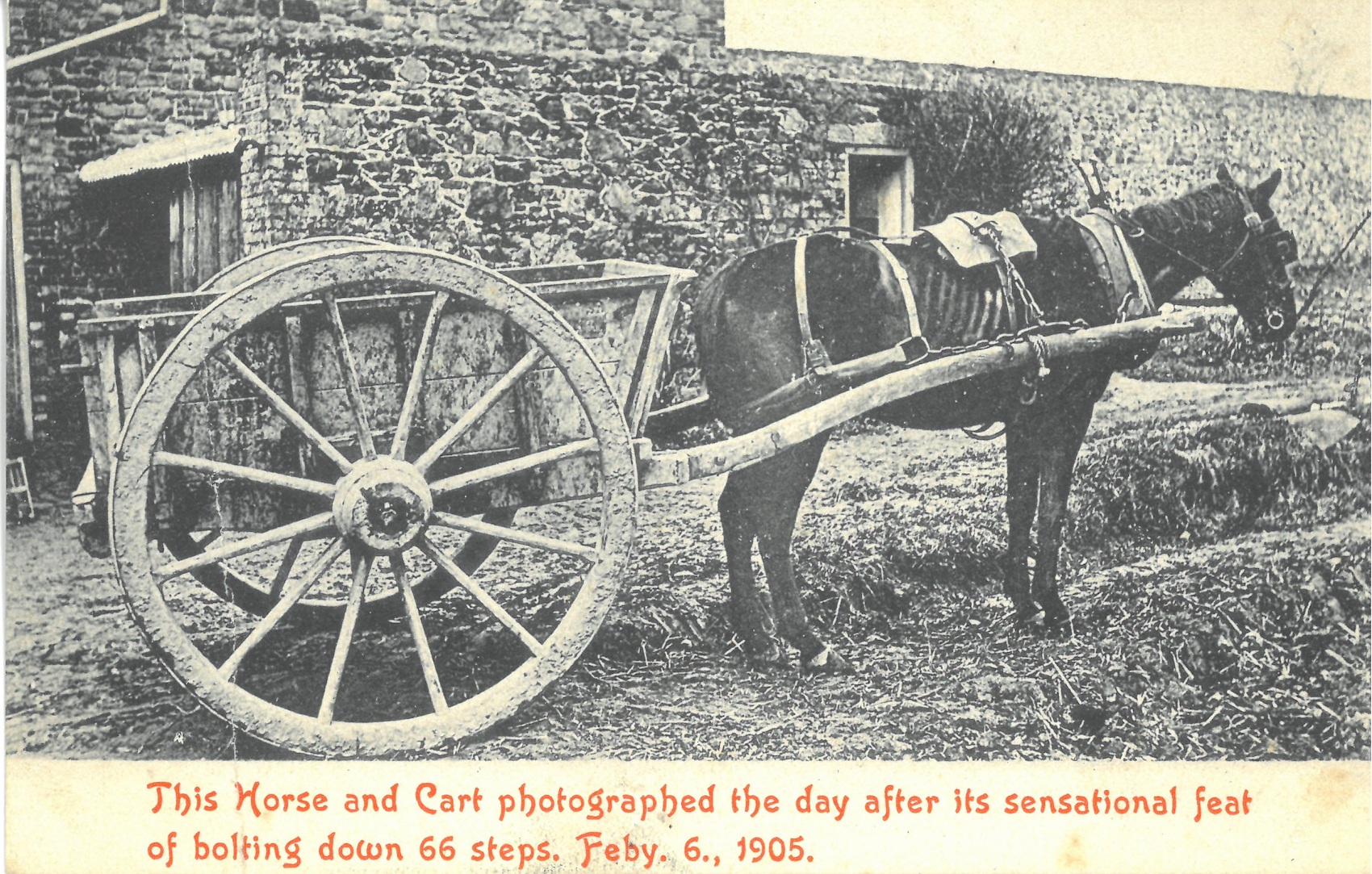 Pictured: A postcard featuring the horse the day after its terrifying adventure. (Jersey Heritage)

In addition, Horace J Hamon of Vernon House, St. Aubin's Road, who was a photographic artist and miniature painter, imagined the incident by superimposing a picture of a horse hurtling down the offending steps. His efforts came well before Photoshop was around.

The horse did not allow its brief fame to go to its head and according to a later newspaper report, finished its career drawing a baker's van.

This story was told as part of a series in collaboration with Jersey Heritage. To uncover more stories like this, visit Jersey Archive or search its online catalogue HERE.