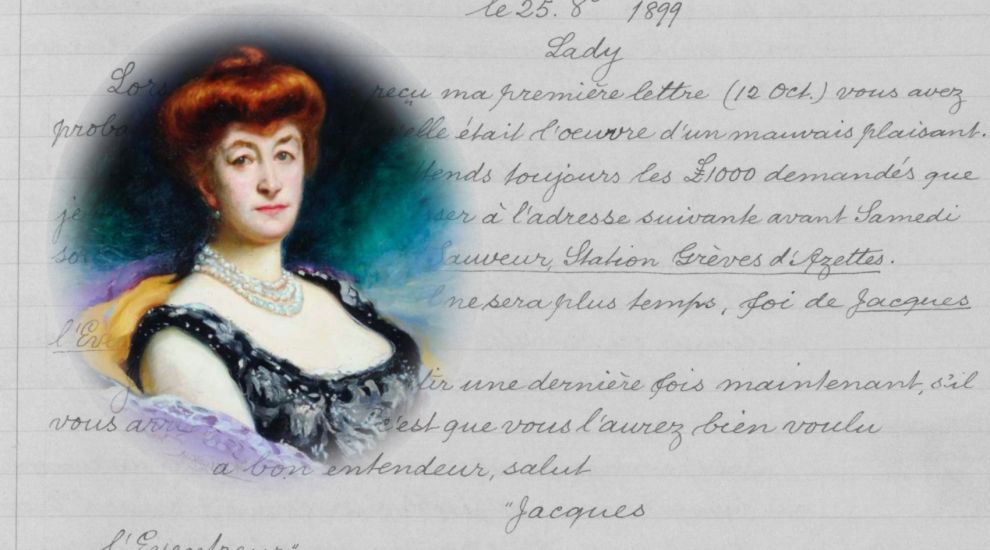 ‘Jack the Ripper’ may not have been someone people living in Jersey had to worry about, but it was a name that would have struck fear into their hearts, especially if they received a death threat purporting to be from him... which is exactly what happened to a local socialite...

On 12 October 1899, Lady Eliza Otway, of Gloucester Terrace, received an alarming letter that threatemned her assassination, if she did not carry out the instructions in the correspondence. 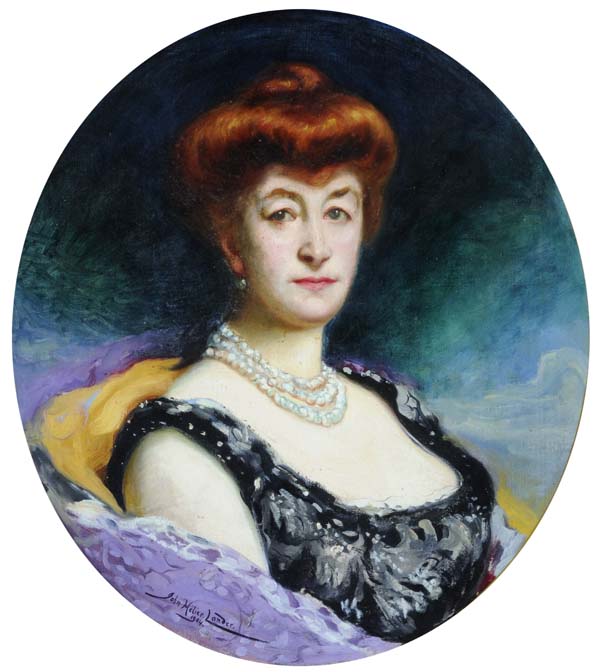 She was told to gather £1,000, package it in a box and send it to St Luke’s Railway Station on 17 October, addressed to “Jacques of Longueville, St Saviour”.

The author said that he would send someone to pick up the package.

He wrote the letter in French, claiming that this was for security because she knew the language. He signed off the letter as ‘Jacques L’Eventreur’, or ‘Jack the Ripper’.

Understandably perturbed by the letter, Lady Otway passed it on to the Constable of St Helier, who forwarded it to Centenier Le Quesne to investigate.

Pictured: Transcript of the first letter sent to Lady Otway, that appeared in the Court Records (Jersey Heritage).

Centenier Le Quesne set about laying a trap. He prepared the box, filling it with gravel in lieu of money, and sent it to St Luke’s Station ready to be picked up as described. Pc Le Breton was employed to keep watch and strike when the parcel was collected.

Unfortunately, no-one came to retrieve the box and the Honorary Police dismissed the entire matter as a practical joke. However, a second letter was passed onto Centenier Le Quesne, this time from the Constable of St Saviour. It was sent with the same purpose as the one delivered to Lady Otway and had been addressed to ‘Mesnage’, which the police concluded meant it was for the owner of Petit Menage in St Saviour.

The investigations continued and took a leap forward when Lady Otway received a second threat herself on 25 October telling her once more to prepare a container filled with £1,000. This time, she was told to leave it at Grève d’Azette Station, addressed to Jean of St Saviour. 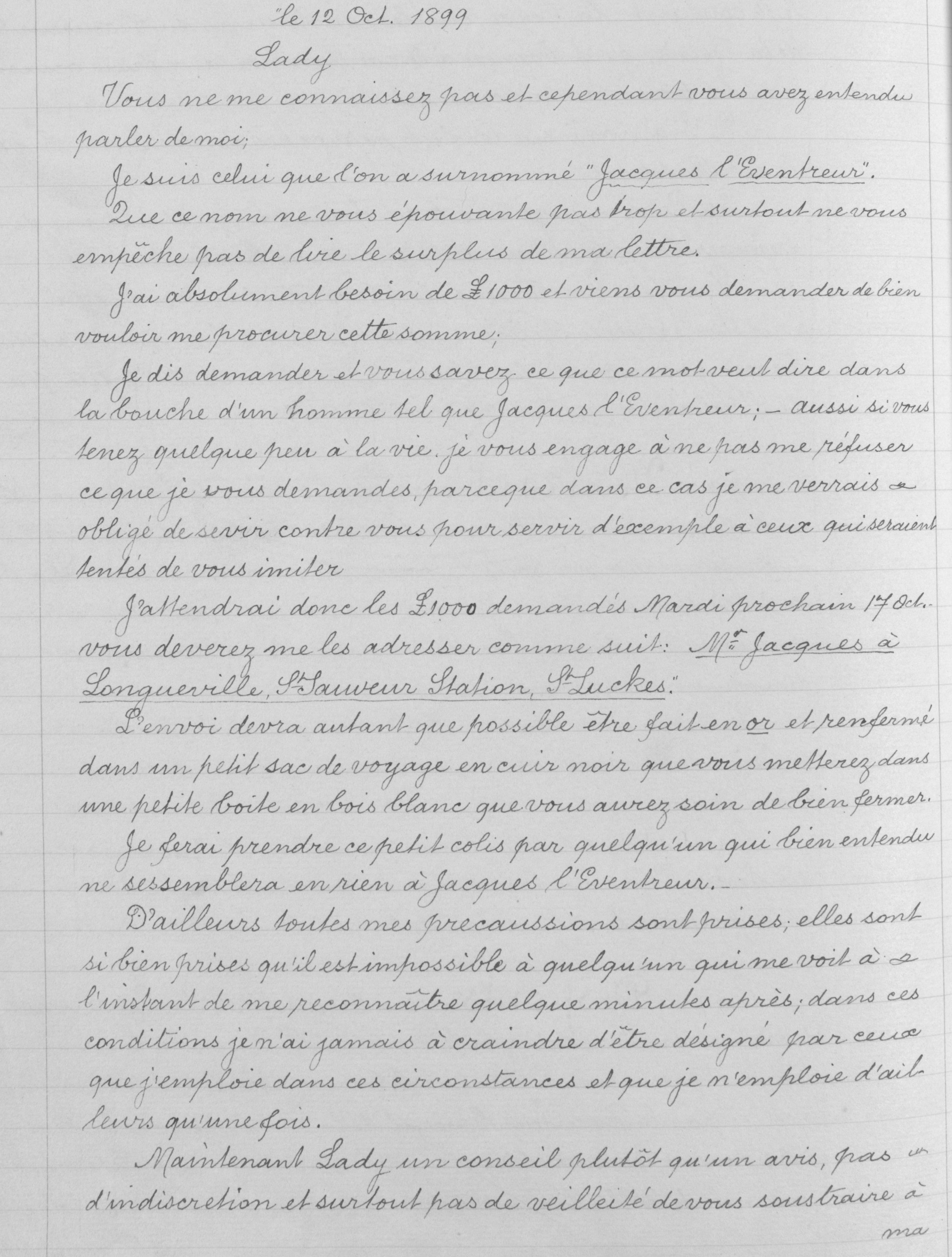 Pictured: Transcript of the first letter sent to Lady Otway, that appeared in the Court Records (Jersey Heritage).

The threatening letter ended with the following lines: “By Sunday, Lady, it will be too late... I have warned you for the last time; should harm come to you, you have sought it. With friendly greeting, good bye. Jack the Ripper.”

Centenier Le Quesne was once again called into action. He put together the package once more and tasked Pc Le Breton with the stakeout. Nothing happened on the Saturday when the pick-up was supposed to take place, but the determined Police Constable continued his vigil the following night. He was rewarded when an individual arrived at 5pm, asked for the delivery, paid and signed for it.

Pc Le Breton sprang into action and took custody of the man, asking him to explain why he had the box. The man said that it belonged to him. Pc Le Breton took him to his house, handcuffed him and left him in the charge of his wife before returning with Centenier Renouf, of St Clement, who formally arrested the man and handed him to the St Helier police. 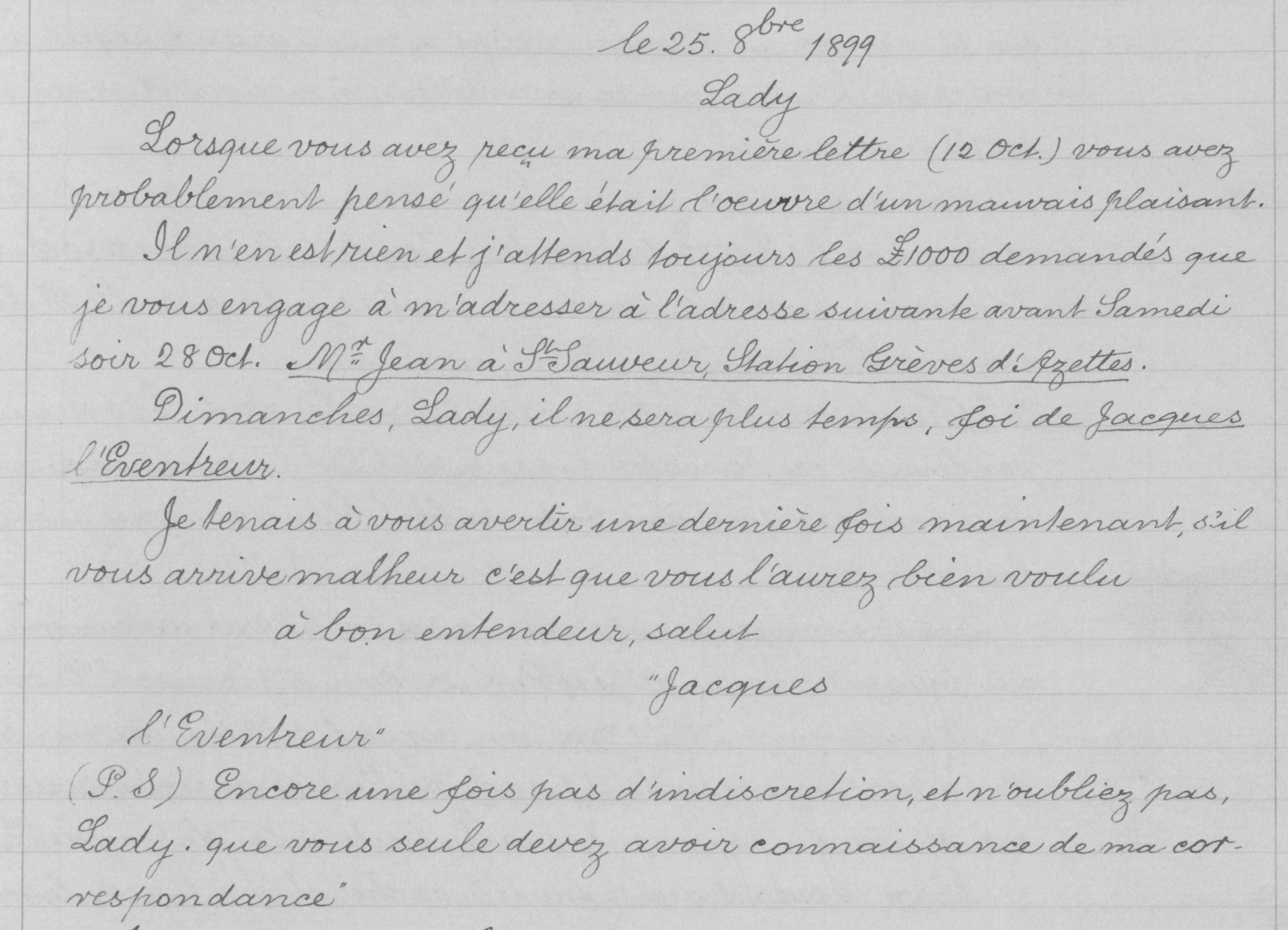 Pictured: Transcript of the second letter sent to Lady Otway, that appeared in the Court Records (Jersey Heritage).

After interrogation, it was revealed that the man’s name was Ernest Desponts and he was a 24-year-old native of Bricquebec, France. He claimed that he had been given 2 shillings by someone to collect the box and deliver it to him at a spot near Bagot Manor. The police accompanied Desponts to the spot in question at the appointed time but no one showed up.

Desponts revealed that he had been in the Island for seven months and for the past two of those, he had been employed by Mr Gauvain, a farmer at Longueville. The police went to his property and, despite Mr Gauvain having nothing to say against Desponts, they found a number of incriminating items in his room and took these into evidence.

This included two envelopes, which closely resembled those that contained the threatening letters and included a particular mark caused by a defect in the cutting machine, and notepaper that matched that on which the letters had been written. Some of the letters had been written in a distinctive violet ink and the investigating officers also found ink of that colour at the house.

They discovered that Desponts knew of Lady Otway as he regularly delivered vegetables to the Market for Mrs Gauvain’s shop, with the chef of the eminent lady being a regular customer.

Pictured: Sentence of Desponts from the Court Records (Jersey Heritage).

A few days later, R R Lemprière forwarded a letter to the police that had been sent at the start of October and was addressed to ‘Madame Lempriere at her estate at Rosely St Martin Jersey’. It had been written in almost exactly the same terms as the others, demanding the box was delivered to St Luke’s Station on 5 October. It was proven that Desponts had visited the station on that day.

The police asked Desponts to write some words so that they could compare the writing styles. They claimed that, despite an attempt to disguise his writing, it still bore similarities to the letters and there were certain words that had been misspelt in the original letter that were also incorrectly spelt by the accused.

Desponts was presented before the Magistrate’s Court and the case was passed up to the Royal Court. By this time, he had abandoned any pretence and had pleaded guilty to a charge of attempted blackmail.

The Attorney General said the charge was extremely serious and held a maximum sentence of two years’ imprisonment. He said that in this case, he would ask for 12 months’ imprisonment with hard labour, followed by a banishment period of five years. 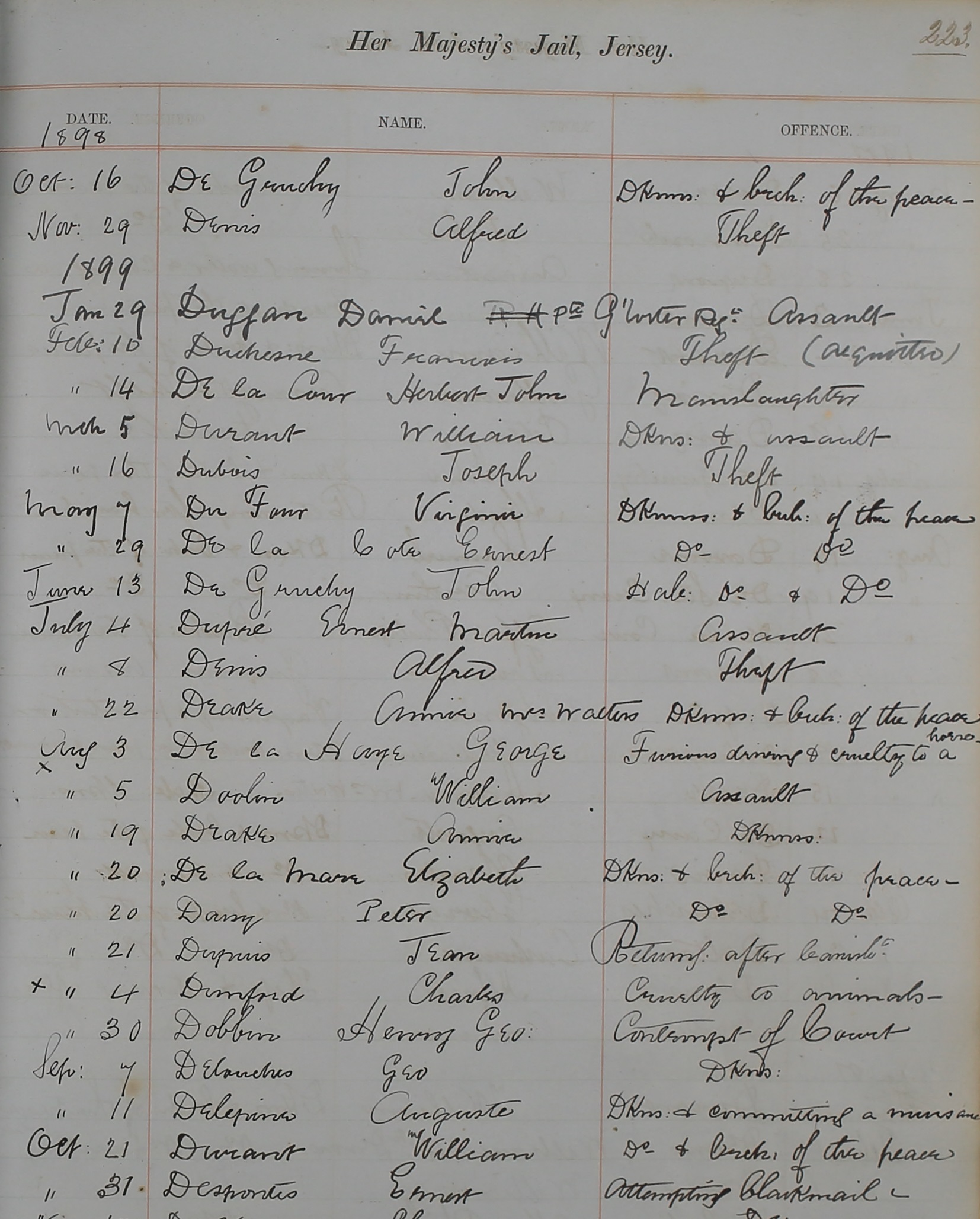 The defence attorney, Advocate de Carteret, said that the whole thing was a farce. He said that Desponts had never attempted to fulfil the threats mentioned in the letters and that he wrote them more with a view to amuse himself.

He claimed that the defendant only went to the station as a guard had told him there was a box waiting for him. The Advocate asked for the sentence requested by the Attorney General to be reduced.

Unfortunately for Desponts, the Court agreed with the conclusion of the law officer and Desponts was sent to jail for a year before being sent away from the Island.

To uncover more stories like this, visit Jersey Archive or search its online catalogue HERE.

A Jersey wedding dress with a royal connection

Bigamy and fraud at the Southampton Hotel

The importance of the Honorary Pigeon Officer

How strong words and kind hearts saved a destitute woman

Fisherman in 1887 accidentally shot by militia

Accusations of election fixing in Trinity