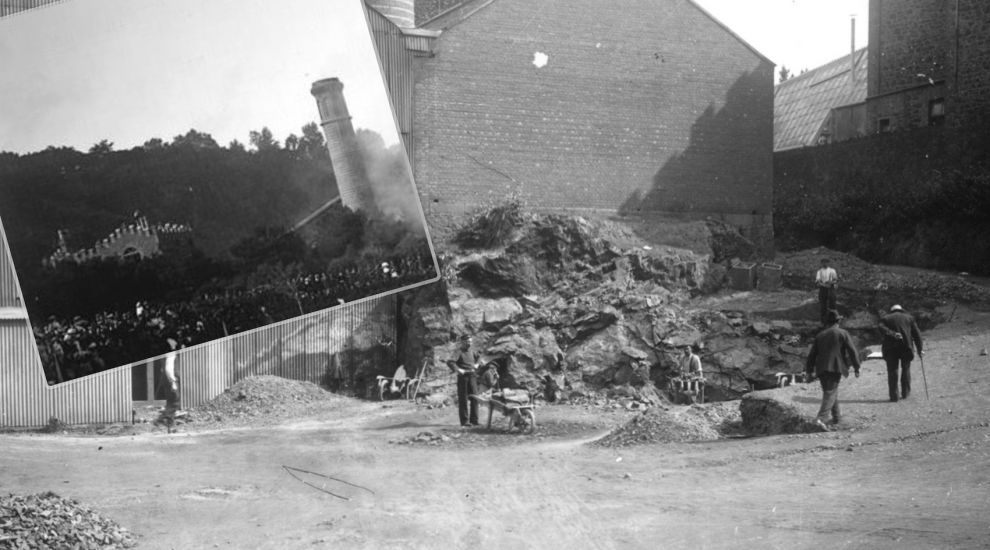 A misfiring refuse destructor was at the centre of an ongoing legal battle for the Parish of St. Helier in the early 20th century, with allegations of noxious fumes, smoke and dust being brought by an irate neighbour.

The neighbour in question was Henry Dutton, the proud owner of Westmount Lodge and the adjacent four vergees of land, which he’d bought from Emile Adolphe Voisin in 1896.

Having paid £600 for the property and over £200 on improvements to the property before he purchased it, he went on to spend over £1,700 on the house. It was situated near the top of the hill with good views of the sea and parks.

The Parish owned the adjoining quarry, which up until that point had been used to quarry stone. However, the neighbourhood changed irrevocably when they decided to develop the land and build a 'destructor', or incinerator, on the land. The destructor was placed a mere 14ft, 7in from Dutton's property. 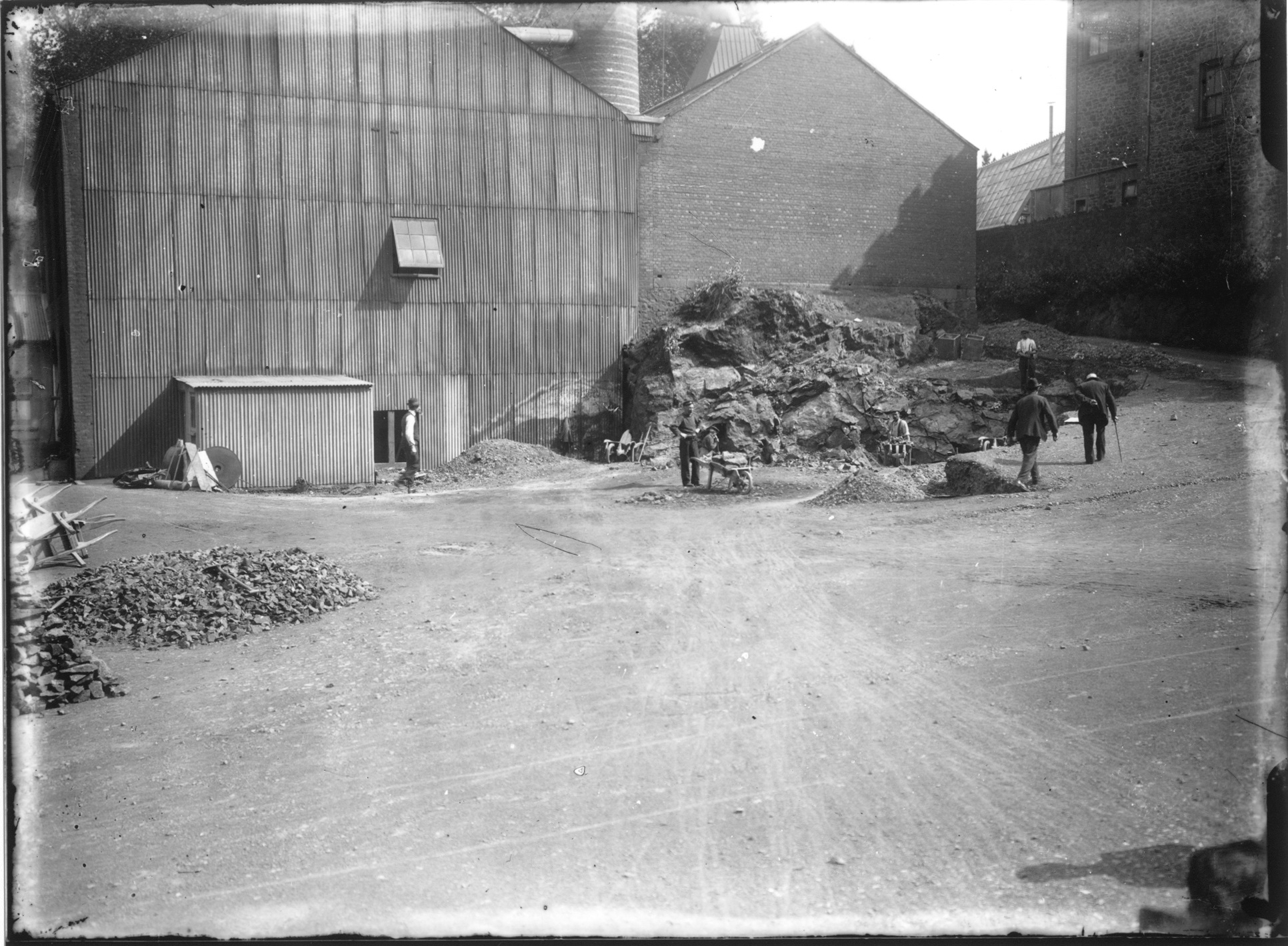 Pictured: Parish Yard, including the destructor, at Westmount in 1914. (Societe Jersiaise - SJPA_033087)

The destructor began working in October 1899 and from that time on, Dutton reported that his property was besieged by offensive matter and odours, with a fine dust left over all his belongings and garden.

Extremely upset about this development, he brought a lawsuit against the Parish. This was heard in the Royal Court in 1901. He demanded that the Constable and Public Trustees of the Parish force the nuisance to cease immediately on pain of a penalty of £5 per day or that a sum of £1,500 be paid to him as an indemnity for the loss of value to his house.

The court case heard evidence from a variety of witnesses. Francis John Quenault, Dutton's gardener, said the damage caused by the destructor included spoilt grapes in the greenhouse that were not fit to eat, nor were the tomatoes and plums, the latter being made black instead of blue. He went on to say that the fruit was not only blackened by dust but was also attacked by flies, that were attracted by the rubbish being burned.

A neighbour, William Le Brocq, said he had noticed the smell and had been forced to close the windows and doors on a number of occasions to guard against it. He also said the smoke so suffused the area that he had often not been able to see Dutton's house as a result.

Mary Ann Howell, wife of Walter Samuel Rogers, an employee of Dutton's, testified that the meat was going bad in the pantry as a result of the conditions; water in the bathroom was black; and a smell like dirty burnt fat could be detected throughout the property.

Resident after resident told the Court about the fumes and smells given off by the destructor. They included pork butcher James William Cory, who claimed that "the smell from the Gasworks was eau de cologne compared" to it.

In turn, representatives from the Parish of St. Helier claimed they had done everything in their power to mitigate the effects of the destructor. Parish engineer Percy Adrian Aubin admitted the apparatus had not been working at its optimum in late 1899 but said this had quickly been rectified when the Chief Engineer of Horsfall Company, the company who built the machine, came over to offer advice to those working it. 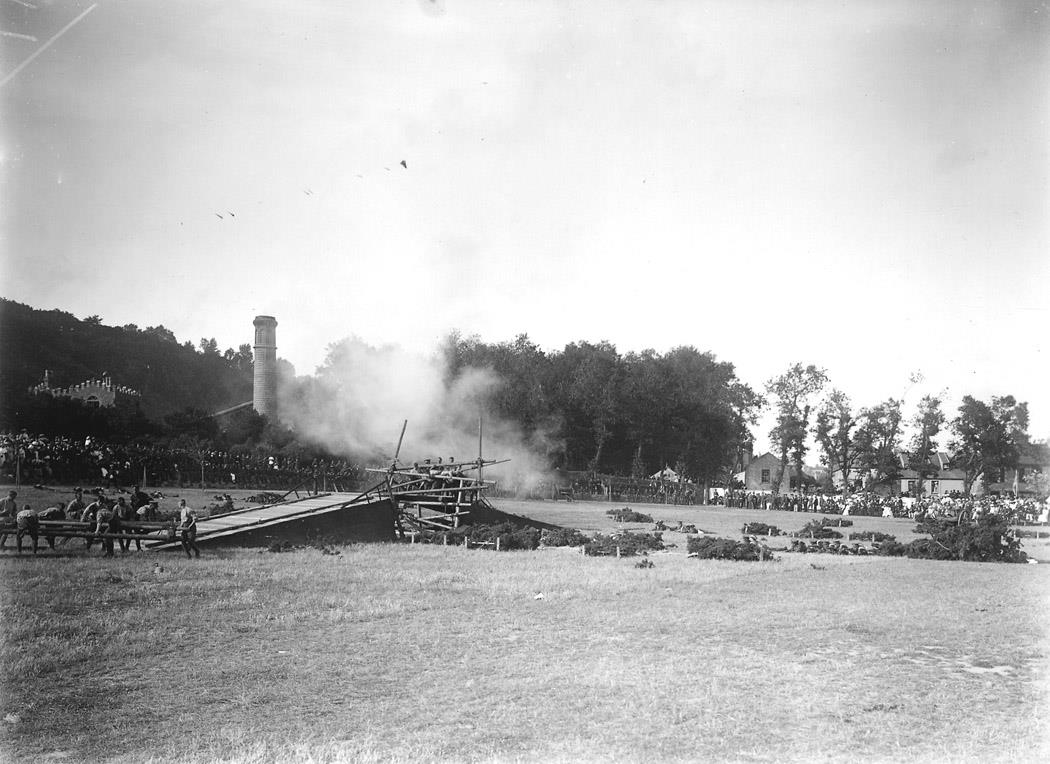 Pictured: The King's Own Regiment Display in People's Park with the parish destructor in the background, c 1920. (Societe Jersiaise - SJPA_012822)

He did admit that the Destructor Committee had always been against the building of the furnace where it was placed because the cliffs at Westmount were higher than the chimney so there was a worry that smoke may not be able to escape.

When the Parish were notified that Dutton was bringing a case against them they endeavoured to get an employee from Horsfall and Company back over to examine the situation but the company refused until final payment for their work on the original site was delivered. The Parish didn't want to pay this until the Court case was resolved.

Opinions varied as to how to improve the site with suggestions including raising the chimney. A shed was built around the machinery in order to try and keep the dust contained but this didn't satisfy Dutton.

The Court found in Dutton's favour saying that the destructor had been a nuisance to him from its commencement up until 3 January 1901, when certain improvements were made. The Parish was ordered to pay £100 up until 1 October 1900, on which date the Order of Justice was issued, and then £1 for each day after that time until 3 January 1901. They also had to pay legal costs.

It was recognised that Dutton had suffered and the Court ordered that in the future the destructor should operate in a way that inconvenienced him as little as possible. The Parish asked leave to appeal the decision but consequently decided against it and paid Dutton.

But this wasn't the end of the story. Mr Dutton brought another case against the Parish in 1902 claiming the destructor was once again causing a nuisance to him. He claimed that he had been forced to leave his house and move to the Esplanade as he and his family were being made sick by the proximity of the destructor. He asked that the machine be switched off immediately, under a penalty of a fine of £5 per day as well as £200 damages and £100 legal costs. 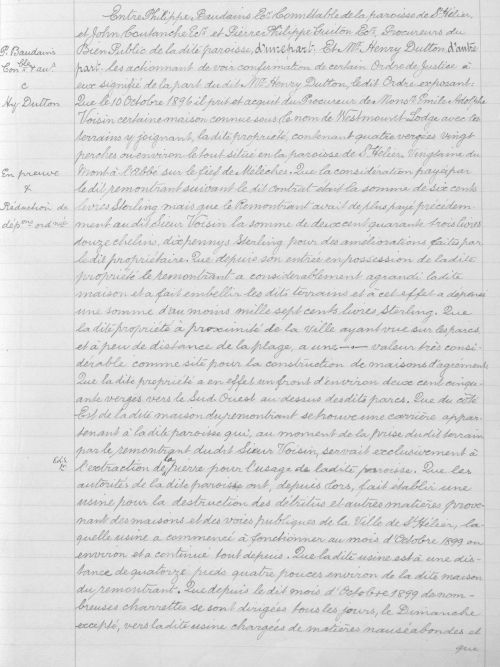 CLICK TO ENLARGE: Case brought against the Parish of St. Helier by Henry Dutton. (Jersey Heritage)

The Parish said that air tests in the area by States Analyst Mr Toms had demonstrated there were no gases injurious to health. Experts for the Parish claimed that the destructor was one of the best worked that they had ever seen. To take a look for themselves, the Court convened to the destructor site to examine the apparatus, the surrounding area and Dutton's property.

When they met once again in Court they judged that the destructor had been set up satisfactorily but that on occasion it had inconvenienced the plaintiff as it had been worked unskilfully. The Parish were ordered to pay £30 to Dutton, together with covering his legal expenses.

Having fought his battles in court, Dutton clearly got fed up with the whole situation and by the time of the 1911 census a few years later, was living at St Pancras in London with his family.

This story was told as part of a series in collaboration with Jersey Heritage. To uncover more stories like this, visit Jersey Archive or search its online catalogue HERE.